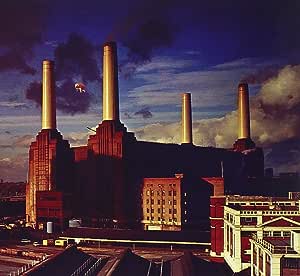 The tenth studio album by the English progressive rock band. The album continues the longform compositions that made up their previous works, including 'Wish You Were Here' (1975).

Penny
5,0 van 5 sterren Masterful Remaster
24 mei 2017 - Gepubliceerd op Amazon.com
Geverifieerde aankoop
This remaster sounds wonderful. This has been my favorite Pink Floyd album for years. Well crafted music full of artistic intent from start to finish. Leaving that aside, the remaster for this vinyl pressing is fantastic. The highs and the lows are loud and clear and you get every bit of the analog warmth you're looking for. I was nervous based upon Amazon's reasonable price. Not all recently pressed records are up to par. Do your ears a favor and make the purchase.
Meer lezen
40 mensen vonden dit nuttig
Vertaal recensie in het Nederlands

David Cotignola
5,0 van 5 sterren Pigs on the wing!
19 oktober 2017 - Gepubliceerd op Amazon.com
Geverifieerde aankoop
Incredibly important album that never got the love it should of because it wasn't full of "radio friendly pop tracks" It speaks a social commentary that resonates even today. Great musicianship, and a strong message. You need to have this album. Yes, you do. Don't argue. Just buy it.
Meer lezen
36 mensen vonden dit nuttig
Vertaal recensie in het Nederlands

BJL
5,0 van 5 sterren Great! A must have!
4 september 2017 - Gepubliceerd op Amazon.com
Geverifieerde aankoop
This one of my favorite Pink Floyd album! I know it's not so popular among Pink Floyd fans, my husband being one of them. The sound is amazing on vinyl. The sounds of the animals and the songs picking up the essence of the animals is just so cool! Never tire of this album, takes me back to the day! A must have for your Pink Floyd collection!
Meer lezen
23 mensen vonden dit nuttig
Vertaal recensie in het Nederlands

I want the last 30 years of my life back.

This CD is apparently based on a modern DSD or high-res digital copy of the same analog master which has been used for various CD-releases, including the 1986 and 1994 releases. The 1986 release was apparently made with a 1st-generation digital deck with Apogee aftermarket input filters. Apogee filters were popular among recording engineers for their superior detail, spaciousness and imaging compared to the stock filters. The 1994 release was apparently made with an early commercial oversampling A-to-D converter, which didn't need complex input filters and probably had 20-bit linearity. I prefer the earlier releases, but only the 2016 release is available as reasonably-priced new CD's. Used CD's are always a gamble since you might get one that looks like it was used as a coaster. But if you buy a used version, you could buy the 2016 release to pay the record company its due.

In case you wonder what I'm using as a player, it's a $100 2017 Nobsound Bluetooth 4.2 Lossless Player, which I gave five stars on Amazon in 2018 and which can handle anything a CD can throw at it. I assume that it's even more amazing with high-res source material, but it's not worth it to me to improve audio beyond what the Nobsound can extract from CD's. Recording engineers need extreme resolution to keep their mixes clean, but it's not necessary just for listening.

Not many people seem to care about audio polarity, but they should because they would probably discover that some of the CD's which they consider to be mediocre just have the wrong polarity and are actually phenomenal with the right polarity. Identifying the correct audio polarity is just a matter of using a good player and listening to the CD when you're in the mood to hear it, so that you're more intent on hearing it and more likely to hear subtle details, and less likely to hear nonexistent problems. You would alternate between the two polarities (such as by listening to one of your favorite tracks for a while with one polarity, and then with the other polarity) until the differences become apparent, or until you get tired of it, in which case you would stop and continue the next time you're in the mood to hear it. (Sometimes it can take a while for the truth about a CD to break through mental blocks caused by your beliefs about how it sounds.) A polarity control would help to speed up this process by allowing you to flip the polarity a bunch of times while playing a passage which is particularly sensitive to polarity, and by eliminating all variables except polarity.

Quite a few CD's, including some very popular ones, have the wrong polarity, and some of these, such as Steely Dan's Alive In America, some (or perhaps all) versions of Pat Metheny Group, and the single-CD version of Steven Wilson's Aqualung remix, don't just sound better, but become much more transparent and alive when the polarity is corrected. (The Pat Metheny Group SHM-CD has the wrong polarity, which could be corrected, but it's also slightly sped up, which ruined the CD for me. I suspect that it was sped up in a misguided attempt to compensate for the lifelessness caused by the polarity error.) I've tried both polarities of the 2016 Animals CD (which has the right polarity), and it definitely sounds better with the right polarity, but I wouldn't call it a stunning improvement.

How to change audio polarity

As far as I've been able to determine, the only new consumer gear with polarity controls consists of a few high-end preamps, such as those by Audio Research (each of which has an Invert button on its front panel, and I assume on its remote control). However, there are a couple of alternative approaches. One is to invert .wav's or FLAC's with an audio editor. Another is to flip the polarity of each speaker connection, which you could do with switches as explained below:

If you add a polarity switch in line with each speaker cable, as described below, do not flip the polarity at high volume levels, or you might damage your amplifier or speakers.

An example of a simple polarity control is a DPDT light/wall switch with cross-connected throws (throw A+ to throw B-, throw A- to throw B+) in line with each speaker connection - apply the input across the poles and take the output from across the throws, or vice versa. Wall switches and suitable enclosures (plastic outlet/switch boxes) are readily available, and the switches have screw terminals and hefty switch contacts.

If you're lucky enough to have components with balanced (differential) connections, you could create an interconnect with a line-level version of the polarity switch described above. However, the same warning applies - before flipping the polarity, mute the audio signal before it gets to the polarity switch, or immediately after the switch, or you might damage your system.