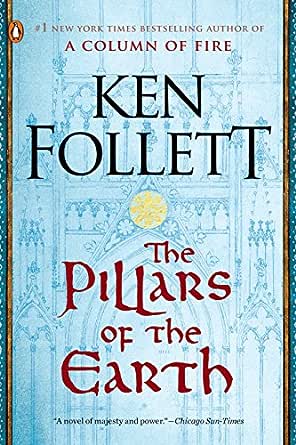 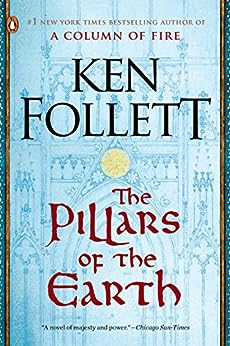 The Pillars of the Earth: A Novel (Kingsbridge Book 1) (English Edition) Kindle-editie

"Wonderful . . . will hold you, fascinate you, surround you." --Chicago Sun-Times

"Enormous and brilliant . . . a great epic tale . . . crammed with characters unbelievably alive across the great gulf of centuries . . . touches all human emotion--love and hate, loyalty and treachery, hope and despair. See for yourself. This is truly a novel to get lost in." --Cosmopolitan "With this book, Follett risks all and comes out a clear winner . . . a historical novel of gripping readability, authentic atmosphere, and memorable characterization. Beginning with a mystery that casts its shadow, the narrative is a seesaw of tension, suspense, impeccable pacing . . . action, intrigue, violence, passion, greed, bravery, dedication, revenge, and love. A love that entertains, instructs, and satisfies on a grand scale." --Publishers Weekly "An extraordinary epic buttressed by suspense . . . a mystifying puzzle involving the execution of an innocent man . . . the erection of a magnificent cathedral . . . romance, rivalry, and spectacle. A monumental masterpiece . . . a towering triumph from a major talent." --Booklist

Look out for the prequel, The Evening and the Morning, coming from Viking in September 2020.

“Follett risks all and comes out a clear winner,” extolled Publishers Weekly on the release of The Pillars of the Earth. A departure for the bestselling thriller writer, the historical epic stunned readers and critics alike with its ambitious scope and gripping humanity. Today, it stands as a testament to Follett’s unassailable command of the written word and to his universal appeal.

The Pillars of the Earth tells the story of Philip, prior of Kingsbridge, a devout and resourceful monk driven to build the greatest Gothic cathedral the world has known . . . of Tom, the mason who becomes his architect—a man divided in his soul . . . of the beautiful, elusive Lady Aliena, haunted by a secret shame . . . and of a struggle between good and evil that will turn church against state and brother against brother.

The Welsh author, Ken Follett, has written a tome about the building of a cathedral in the imaginary village of Kingsbridge, England, in the 1100s. He stipulates that he is not a believer and that his ambivalence about writing this historical novel lasted for years. However, at some point in his life, he became enamoured of and obsessed with cathedrals, and visited many of them prior to putting words to paper. The novel occurs within the context of ecclesiastical versus imperial power, as well as during the Civil War between King Stephen and the empress Maud. This setting is similar to the situation during which the Brother Cadfael novels occur.

As mentioned in the title and the comment above, the overarching them of the book is the decades-long building of a cathedral at the Kingsbridge Priory, amidst much corruption, political manipulation, slaughter, and evil aimed at Prior Philip's Benedictine monastery. However, Follett has created a novel that possesses stories within stories within the primary theme. In it, we meet some of the most loving, if sometimes eccentric, people, along with destructive, power-seeking, and envious ecclesiastical and political figures. Follett does not spare anyone her or his weaknesses and faults, including the most significant protagonists. Nor does he cease to decry the sheer brutality of Earl William and Bishop Waleran Bigod, the primate of Kingsbridge.

The author creates a cast of many protagonists as well as antagonists who are central to creating destructive challenges for the Prior to build the cathedral. Church corruption is made clear, as is the use of political people and men-at-arms to effect the plans of Bigod to destroy Philip. Follett has clearly done considerable research, and blends historical persons with fictional characters very well.

At times, I thought the author could begin to tie up the narrative but he elected to create yet one catastrophe after another. In the beginning of the novel, the writing could be described as simplistic, but it evened off later into a respectable and engrossing narrative. If one is interested in Medieval history, the role of Church and State during this era, and a plethora of characters, plots, and subplots, this book is recommended. One gets a sense of monastic living, the lives of serfs and peasants, and the overall life of clerics in this work. In addition, the age-old themes of good and evil underlie all the dynamics in the story.
Meer lezen
131 mensen vonden dit nuttig
Vertaal recensie in het Nederlands

ElizaSF
1,0 van 5 sterren Revolting
1 juni 2019 - Gepubliceerd op Amazon.com
Geverifieerde aankoop
I’m a little sad to say that I could not finish reading this book; something I never do. I like the premise, the modified history doesn’t bother me. Lengthy descriptions are fine because they are written engagingly. But the rape scenes!!!! I get that William is a villain; he’s ruthless and cruel, but the loving adoration that Follett treats William’s inner thoughts with is disgusting and disturbing. He takes nothing but pleasure is describing the most depraved thoughts and acts with barely any understanding of the effects on the victims, much less us readers. If you want to be horrified to the point of nausea, this book is for you.
Meer lezen
89 mensen vonden dit nuttig
Vertaal recensie in het Nederlands

J. Hooligan @ Platypire Reviews
5,0 van 5 sterren 5 Platypires
14 oktober 2016 - Gepubliceerd op Amazon.com
Geverifieerde aankoop
I once read an interview by one of my favorite indie authors, Matt Schiariti, and he listed this book as his all time favorite. I bought this book later on this year, but put off reading it because IT IS OVER 1000 PAGES - OH MAI GAWD!

But, wanting to look cool I decided to give it a try. Honestly, it didn't sound like anything I'd be interested in... so I didn't have any expectations.

And then I started it, and whoa man. I got sucked in.

There's so much drama in this book. Right when you think one thing is resolved, something else pops up. Oh, and I cried. I don't even know how many times. I also lost a lot of sleep.

Despite the amount of pages, I flew through this book.

This takes place over an amount of decades with lots of characters. But they're all written so well, even the ones that only show up for a couple pages, that they are all distinctive. And there are so many intertwined stories, but there wasn't any times where I was confused about what was going on.

After finishing it, I brought it to my dad and told him he has to read it. I very rarely make recommendations to my father. (This is the second book I've told him to read in the last five years.)

Major thing to point out - the woman in this story are ah-may-zing. Yes, it's historical and things were different back then. But they were all written as strong, independent, and Ellen was totally the most sane character in the entire book. My only complaint is that there wasn't enough focus on her.

I highly recommend this book to anyone who likes drama and has any interest on 12th century England.
Meer lezen
332 mensen vonden dit nuttig
Vertaal recensie in het Nederlands

stephanie
1,0 van 5 sterren no thanks
14 juli 2019 - Gepubliceerd op Amazon.com
Geverifieerde aankoop
I ordered this by accident. My kids were telling me about it and I looked it up. Next thing I know I received notice that I'd ordered it.
I tried reading it, the author is preoccupied with rape and sex. I won't be finishing this read.
Meer lezen
48 mensen vonden dit nuttig
Vertaal recensie in het Nederlands

ben manu marr
1,0 van 5 sterren I get it, but
20 maart 2019 - Gepubliceerd op Amazon.com
Geverifieerde aankoop
I see how people would like this and for the most part everything is there for this to be considered a great book, but. There’s a continuous cycle of things are going okay - let’s destroy everything. People pick themselves up from disaster and are going okay - let’s destroy everything. It just gets boring because you know what’s coming. Anytime something is going well you know that in a few pages that the worst thing in the world is going to happen. Like clockwork. It’s boring and I wished I hadn’t persisted to the end. And don’t get me started about all the girls having “hot bodies”. I didn’t know that was a term used back whenever. Weird
Meer lezen
37 mensen vonden dit nuttig
Vertaal recensie in het Nederlands
Ga naar Amazon.com om alle 5.787 recensies te bekijken 4,5 van 5 sterren
Ontdek het beste van shopping en entertainment
Gratis en snelle bezorging van miljoenen producten, onbeperkt streamen van exclusieve series, films en meer
> Ontdek Prime
Terug naar boven
Over ons
Verkoop bij ons
Amazon-betaalmethoden
We helpen je graag
© 1996-2020, Amazon.com, Inc. en dochterondernemingen