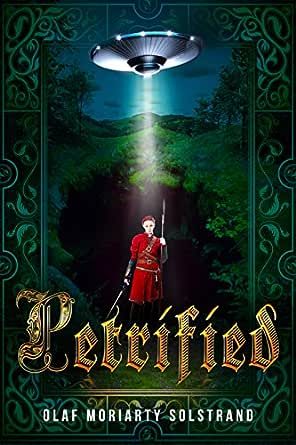 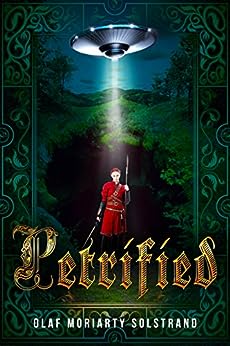 Gunhild is a private in the Royal Army. She’s headstrong and reckless, but she’s also the best troll hunter in the country, and when a troll gets away with a national treasure, she’s the only person with any chance of getting it back.

Kirabo was on his way home to Aberash after a fulfilled research mission, but he managed to enter the wrong coordinates into his spaceship. Now he and his PA robot are stranded on a far-off planet, and they don’t have enough fuel to get back home.

As genres collide on Troll Island, Earth, the troll hunter and the space explorer have to overcome their differences and work together if they want to survive this fairytale.
click to open popover

Per Eide
5,0 van 5 sterren Great book!
25 september 2016 - Gepubliceerd op Amazon.com
Geverifieerde aankoop
I don't normally read YA books (anymore, I've read a few libraries worth when I was a kid :-)), but I follow the author on Twitter and enjoy his writing and humor there so I thought I'll give this a chance.

I'm glad I did because this turned out to be a great book! It's got a brave young knight, an alien, trolls, a spaceship and a sarcastic robot amongst other things. I don't want to spoil too much of the story, but I'll say that I really enjoyed the mash-up of different genres, it makes the book a surprising and fun read.

There's a lot of good humor in there (the rowboat thing made me laugh out loud) and there's plenty of action and suspense too. It's a really entertaining book and I really hope we'll see more of the characters.

A great book that I highly recommend!

Fredrik Meyer
4,0 van 5 sterren Suspenseful troll hunting
22 augustus 2016 - Gepubliceerd op Amazon.com
Geverifieerde aankoop
I'm probably not in the intended audience of this book, but it was a fun read nonetheless. The plot has several layers, the language is very good, and there are some (not so well hidden) moral lessons as well. I do wish I read this book fifteen years earlier (I'm 27), but I did still enjoy it.
Meer lezen
Vertaal recensie in het Nederlands

Believer
4,0 van 5 sterren A Compelling and Interesting Fairytale
28 september 2016 - Gepubliceerd op Amazon.com
In "Petrified" a short novel,Oalf Moriarty Solstrand combines trolls, knights, an alien and robot in a creative and unique plot that begins with a bedtime story. To get Ylva to go to sleep her mother weaves a fairytale adventure that not only captures her imagination but eventually unites her divorced parents in the telling.

It begins with Gunhild as strong-willed and impulsive knight sent on a reconnaissance mission to Troll Island in the middle of the fiord after the royal amethyst crown is stolen during the coronation ceremony. Scouting out the island for caves that could house the dangerous, legendary creatures Gunhild meets Kirabo a pacifist from the planet Aberash and his robot RJ who are stranded on her home world after the wrong coordinates are entered into the spaceship. Hunting for fuel to take them home the space traveller and robot not only stumble into the knight but the three form an alliance that has them working together to survive a deadly confrontation with the Trolls.

Cleverly the author weaves a plot that not only unites the storytellers, estranged after their divorce but also whisks their daughter away to a land where a young knight learns to think differently when taking action, about friendship and even self-sacrifice while Kirabo suffering a loss begins to understand that knowledge isn't everything. Mesmerizing from the first page to the last, the plot is well-structured, action-filled, intense and even touching and ends with a twist after a confrontation with the Trolls.

Gunhild Baardsolotter a knight in the Royal Army is tough, bold, strong and reckless. She dreams one day of becoming a general but can't get a promotion because of her insatiable need to be the best and do everything herself. Kirabo is the straight-laced, smart and peaceful alien who uses the spaceship in his garage to earn money for his University education while RJ is his sarcastic, delightfully funny and chatty personal assistant. Together the three form a bond of friendship that's unbreakable even though they're all different and live worlds apart. Like all the characters these three infuse the story with depth, spirit and energy which makes the fairytale compelling in its intensity.

I thoroughly enjoyed "Petrified" and can't wait to see what this new writer has in-store for his readership next.
Meer lezen
Vertaal recensie in het Nederlands

Up 'Til Dawn Book Blog
4,0 van 5 sterren Knights, trolls, and aliens? What a strange, yet awesome combination!
9 september 2016 - Gepubliceerd op Amazon.com
**Disclaimer: I received a complimentary copy of this book in exchange for honest review.**

Gunhild is a royal knight. She is a fierce female with a knack for taking down menacing trolls, far exceeding the deeds of her fellow knights. Yet, when the time for a promotion comes around, she is passed up. Furious, she demands an answer as to why, only to learn that her overzealous and fearless work ethic makes her a danger in a leadership role.

Determined to prove herself, Gunhild volunteers to help retrieve a stolen item of great value. This entails traveling, alone, to the trolls' island in order to scout the enemy. As a heroine, Gunhild is quick-witted, calculated, and an overall interesting woman to follow.

On the other side, we have our visitor-from-another-world, Kirabo. Landing on the planet by accident, his space vehicle becomes stuck without enough fuel to return home. And where does he land? On the trolls' island, of course!

This book had a good mix of humor, action, suspense, and imagination. I laughed, loudly, several times when reading the dialogue of Kirabo's sarcastic robot sidekick. The action scenes were aplenty but I didn't feel as if they took over the story. Sometimes, too much action can actually have the opposite effect and bore me. Not this time, though.

Petrified pleased me, for the most part. I loved the idea of estranged parents working together to tell this story, each adding their own twists. It made the story more creative and enjoyable to see a mash-up of ideas from each parent and it was a heartwarming addition.

My major gripe is with the technicality. I would prefer smaller paragraphs for an easier and more aesthetically pleasing read. Some paragraphs were so large that they took up my entire screen and I lost my place more than once. Also, there were constantly repeated words and phrases such as "managed to". However, this could have been a result of translation if not a writing blunder. This book was not originally written in English.

There is no love story here, which I was fine with. Though, I did get an idea that there would be one from the book's description which clearly introduces both female and male characters, so I naturally assumed. But even though there was no romance, this was still a good read. And while there are alien and robot characters, this is definitely more of a fantasy YA read than Sci Fi.