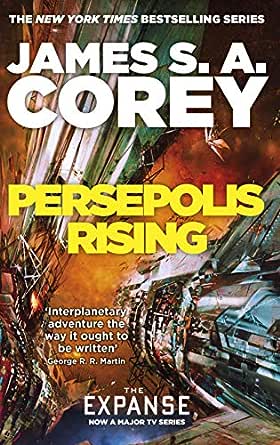 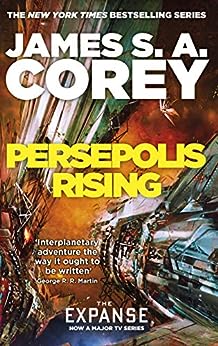 In the thousand-sun network of humanity's expansion, new colony worlds are struggling to find their way. Every new planet lives on a knife-edge between collapse and wonder, and the crew of the ageing gunship Rocinante have their hands more than full keeping the fragile peace.

In the vast space between Earth and Jupiter, the inner planets and the Belt have formed a tentative and uncertain alliance, still haunted by a history of wars and prejudices. On the lost colony world of Laconia, a hidden enemy has a new vision for all of humanity - and the power to enforce it.

New technologies clash with old, as the history of human conflict returns to its ancient pattern of war and subjugation. But human nature is not the only enemy, and the forces being unleashed have their own price. A price that will change the shape of humanity - and of the Rocinante - unexpectedly and for ever . . .

The seventh instalment of Corey's series }The Expanse{ - now a popular Netflix show. The crew of gunship }Rocinante{ keep an uneasy peace as the inner planets between Earth and Jupiter hold a shaky alliance
Alle bekijken

fiznatty
3,0 van 5 sterren Marks a needed transition, but lacks the substance of earlier novels
31 december 2017 - Gepubliceerd op Amazon.com
Geverifieerde aankoop
The authors made a bold move by jumping ahead a couple decades after the last book. This sudden transition may be a bit jarring to readers, but seems like a necessary change to bring the series to its conclusion. The Expanse could easily have ended (and ended well) after Books Five and Six, so it makes sense that any subsequent volumes would need to veer in a different direction.

I have a hard time agreeing with others that claim this is one of the best novels in the series. Though it was interesting to see it tie events back to Book 4 (which suddenly makes what I previously felt was the weakest novel in the series more relevant), it seemed this volume was less engaging than its recent predecessors. By necessity, I suppose... it's setting up the new "future" timeline by investing in a lot of new details and characters that will drive the story home. As a result, we spend less time with the characters and team that have carried the tale until now. The story, action and continuing character development (with the exception of Bobbie and perhaps Amos) is scattered and a bit light.

It's the type of book that's needed to set up the bigger stuff that comes next. While an essential part of the story, it doesn't really hold up when compared individually to the other novels.
Meer lezen
42 mensen vonden dit nuttig
Vertaal recensie in het Nederlands

Jay Batson
4,0 van 5 sterren Close to done
10 februari 2018 - Gepubliceerd op Amazon.com
Geverifieerde aankoop
As with the other books in this series, I looked forward to picking it up daily and continuing to read. There are fun ideas, personalities that have become warm friends, and a string of challenges for the crew of the Rocinante to (mostly) overcome, though the ever-strong Roci is sadly bridled and in stocks more than I wanted in this installment. Still, if you have read the prior books in the series, you should definitely read this one too.

I must say, though, that there are a couple of cracks In the bulkhead that are starting to show up for me. Several times reading through this book, I felt like the authors’ pace had slowed down too far. It felt like there was filler I shouldn’t have to wade through ... like they were turning one book into two for the sake of sales. There was plenty of detailed painting of the flowers on the wall of the moment, and not the fast advance through the story that was the hallmark of the prior books.

Enough so that I am starting to tire of this journey. The wait for the plodding insurrection on Medina station to have a meaningful impact on moving the story was truly starting to drive me nuts, as was the inexorably slow wait for the space battle between the trade union and the invaders. I yearned for the quick moving machinations of Avasarala, who - both in, and like the book - has become long in the tooth.

The tragic character of the occupying governor on Medina station also weakened the story for me. The character was too obviously flawed and doomed from the beginning. It was painful, not in a good way, to have to process this as part of the story arc.

On the plus side, it was nice that the book makes us examine the moral dilemma posed by being subject to a benevolent dictatorship. It is an interesting idea to develop in the context of actual politics and governance on planet earth in the year 2018. Some of the best science fiction in history has served to highlight what it might mean to wield ultimate power without checks and balances. I hope the next book will rise to the challenge of greatness regarding this, and be a great commentary on the governance of the human situation.

Finally, I simply find myself wanting to see how the story is going to end. After the cliffhanger of an ending in this book, I’m sure I will read the next one. But I think it would be good if the next book were the last one in the series. How ever the crew, galaxy, universe, and the proto-monsters lurking in the dark abyss want to resolve the inevitable clash to come, I hope they do it in the next book.
Meer lezen
22 mensen vonden dit nuttig
Vertaal recensie in het Nederlands

Mary Soon Lee
4,0 van 5 sterren I found this more bittersweet than earlier volumes.
24 maart 2018 - Gepubliceerd op Amazon.com
Geverifieerde aankoop
Alas, alas, alas. I have reached the current end of the Expanse science fiction series, and must now await, very impatiently, the release of volume eight. I devoured the existing seven books in approximately one month, with several of the characters growing into friends, and I don't want to say goodbye, even temporarily. I note that there are several short stories/novellas that accompany the series, and soon I will gobble those up.

As to book seven in particular, I found reading it more bittersweet than earlier volumes. Two of the plot choices upset me. I won't be specific, because I don't wish to spoil the book, but both made me sad, a foretaste of the greater sadness that came with reaching the end of the book, the end of the story so far.

Lest there be any doubt, I liked Perseopolis Rising very much, as I have liked the entire series.
Meer lezen
15 mensen vonden dit nuttig
Vertaal recensie in het Nederlands

gardener97
3,0 van 5 sterren Hard time finishing - SLOW and this is 30 years later (?) why 30 years?!
4 april 2018 - Gepubliceerd op Amazon.com
Geverifieerde aankoop
I absolutely loved the other books, just swept through them and bought the audiobooks too. This one? Not so much. I really wanted to love it and I just knew I would love it but... I see I bought this on Dec. 5, 2017 and I am not quite halfway through. I keep coming back to it, read a few pages and go on to something that really grabs my attention. I hate that this is some 30 years later. How can we view our young heroes as young heroes anymore. 30 years? Really? 10 might be ok but 30????

Also at 48% into the book, they are still under the oppressor thumb, not having moved a jot or a tittle from when the gate was first breached. Still talking about what they are gonna do. Talking and wondering and chewing on ideas. And talking talking talking...