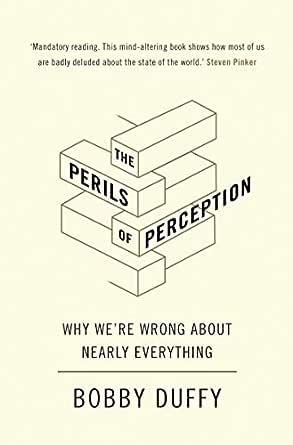 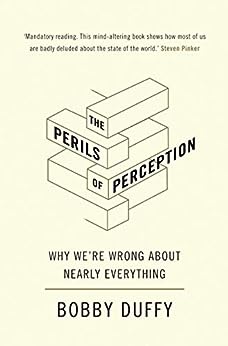 The Perils of Perception: Why We’re Wrong About Nearly Everything (English Edition) Kindle-editie

"Bobby Duffy's book is a unique and compelling confrontation with the narratives that shape our lives, society and politics, marrying fascinating data with superb analysis. It is simply indispensable." --Matthew d'Ancona, author, Post-Truth

"This interesting and well-informed book is an invaluable guide to how our perception of facts is shaped. It includes fascinating comparisons between different countries. And it shows that facts and evidence do still matter. Bobby Duffy is a voice of calm reason amidst all our anxieties about a post-truth world." --David Willetts, former Conservative Party MP

"Mandatory reading. This mind-altering book show how most of us are badly deluded about the state of the world." --Steven Pinker, Johnstone Professor of Psychology, Harvard University, and author, Enlightenment Now

"Illuminating and important. Duffy has spent a decade finding the gaps between our perceptions and reality. The result is this fascinating study." -- Dan Gardner, co-author, Superforecasting

"A superb and timely analysis of a genuine and growing threat to democratic debate." --Alastair Campbell, author, and former Downing Street Press Secretary

"A masterful overview of how our perceptions are repeatedly off the mark. Consequential and timely." --David Halpern, Chief Executive of the Behavioural Insights Team

Do you eat too much sugar? What proportion of your country are immigrants? What does it cost to raise a child? How much tax do the rich pay? Are we more ignorant than we used to be?

Take a minute to answer these questions. No matter how educated you are, this book suggests you are likely to be very wrong indeed. Informed by exclusive research across 40 countries, conducted by global polling firm Ipsos, The Perils of Perception investigates why we don't know basic facts about the world around us.

Using the latest research into the media and decision science, Bobby Duffy asks how we can address our ignorance and why the populations of some countries seem better informed than others. Essential reading in the so-called 'post-truth' era, this book will transform the way you engage with the world.

faraway
5,0 van 5 sterren A great read - that will change the way you perceive everything
30 november 2018 - Gepubliceerd op Amazon.com
Geverifieerde aankoop
The author suggest that not only are “biases hardwired into us”, but also they are incredibly difficult to evade. We think that we are misled because we are bombarded with misinformation, but this is only part of the story. The way we think, and all our biases, such as “herding bias”, “present bias” are just a few examples of unconscious biases highlighted. The author also points to “available heuristic” and “filter bubbles” that contribute to our misperceptions of reality. Although misperceptions are present throughout history, this book takes it a step further through the impressive scale of the research and drawing on several interesting studies. The author does not leave us in a ‘victim’ state, but provides us with a handy set of points to help us form a more accurate view of the world. I could not put the book down. Highly recommended.
Meer lezen
8 mensen vonden dit nuttig
Vertaal recensie in het Nederlands

Shevek
5,0 van 5 sterren Data driven and storytelling
1 februari 2019 - Gepubliceerd op Amazon.com
Geverifieerde aankoop
With a great number of data metrics and statistics the author tells a story in his own personal tone: we have bias, we are stubborn, the world is better than before but a long way to fix things, and give the reader some tools to deal with and to dialogue with others. I like that it has a solid argumentation that the bias issue is not new and we are not dealing with a crisis on post truth reality: always we have been there. Balanced because it address up front what’s wrong and the impact of new technologies on making some issues more difficult to solve.
Meer lezen
3 mensen vonden dit nuttig
Vertaal recensie in het Nederlands

Amazon CustomerSid Booksh
3,0 van 5 sterren A resounding... meh
8 maart 2019 - Gepubliceerd op Amazon.com
Geverifieerde aankoop
Too much verbal filler. It's the kind of stuff you'd see in a supermarket tabloid. I give it three stars (I'm feeling generous) because I can see why some folk might find it entertaining. If you want actually useful information see "Factfulness: by Hans Rosling. It's an order of magnitude better
Meer lezen
5 mensen vonden dit nuttig
Vertaal recensie in het Nederlands

It seems to be one of a plethora of recent books claiming to help us to escape the snares of prejudice and ideology, fake news and disinformation.

Most of these authors, these fatuous, media savvy, self-appointed gurus of clear thinking are just as opinionated and prejudiced as you are, but they're more than happy to take your money and exploit your vain hope that they will instruct you to see the world more clearly.

Most of these books are god-awful, and they abound in nostrums such as “accept the emotion, challenge the thought,” (p. 239)

Prior to the current hysterical climate, normal people were aware that they were prejudiced, and that their prejudices influenced the way in which they processed information, that the news media was ideologically prejudiced, and that if one wanted a clear picture of the world, one would need to compare multiple sources, and to proceed with caution, diligence, and skepticism.

What used to be common sense has now become some sort of blinding new discovery.

I looked for “pit bull” in the index in order to see whether the author treated this controversial issue, about which I happen to be well-informed.

I was in luck.

Unfortunately, the author is as ignorant about this issue as he is smug.

He cites a Denver Post article which discusses a study claiming that news reports tend to focus on pit bull attacks, even though labradors bite more people.

“This is despite pit bulls only accounting for 8% of reported dog bites in Colorado…” (p. 62)

This is treated as prima facie evidence that there is a prejudice against pit bulls, one that must be dispelled by “reason.”

The source of the “study” is the ASPCA, which opposes sensible legislation to regulate pit bulls and other dangerous breeds - their propaganda on the topic is extraordinarily tendentious and dishonest, and would make it extremely interesting study for a social psychologist who wants to explore collective delusion.

If Bobby Duffy had done any meaningful research on this issue, he would have found a conflict between the pit bull lobby on the one hand, funded mainly by wealthy breeders, and the victims of pit bull attacks on the other, funded by absolutely no one, but given moral support by a number of brave medical professionals, in particular pediatric plastic surgeons like Dr. Michael Golinko.

He would have discovered that the reason why all three branches of the United States military, New Zealand, Denmark, Puerto Rico, Ontario, dozens of countries and thousands of communities around the world ban pit bulls is because they are extraordinarily unpredictable, and when they do attack, the results are incredibly devastating.

As any sensible 9-year-old would be happy to explain to our brilliant best-selling author and “expert” in social psychology, the number of dog bites is utterly irrelevant, what matters is their severity.

What matters is the number of fatalities and serious injuries, including amputations.

In fact, pit bulls - although only approximately 6-7 percent of dogs in the United States - are responsible for the majority of fatal dog bites, and according to many studies, the majority of amputations and serious dog bite injuries - and the majority of dog bites that require multiple surgeries.

Here's one example perfectly coherent source, also from the Denver Post, entitled “Pit Bull Bans Are Still Justified,” published on January 28, 2018.
“The problem with pit bulls…is that when they are aggressive and do attack, the strength of the dog’s bite and its propensity to continue to attack after the fight has begun result in more traumatic outcomes, particularly for children.
Researchers last year examined data from 101 unique dog bites to the head and neck in 2012 and 2013, as documented by the University of California Davis Health System. They found that ‘dog bites from pit bull terriers, compared to bites from all other dogs, are more common, more severe, and not related to the dog being provoked.’
A larger study in 2016 of dog bite injuries found ‘pit bull bites were implicated in half of all surgeries performed and over 2.5 times as likely to bite in multiple anatomic locations as compared to other breeds.’”
Pit bulls are different from other dogs because they were BRED to be different - behavioral traits are strongly heritable in dog breeds, as in all species.

Pit bulls were bred to fight to the death, to be insensible to pain, and to attack without warning.

The author's conclusion that “even pit bulls are nicer than we think” (p. 73) is the kind of airy, superficial, sloppy, tendentious nonsense that makes this book a SYMPTOM of a collective disorder - delusion disguising itself as enlightenment, prejudice as data-driven objectivity.

I shall not subject myself to the frustration of reading the rest of this book. Instead, I am going to assume that if the author is so horrendously wrong on one issue, he is likely to wrong about many.

And that this method is fraudulent - spend 15 min. researching a complex issue, then issue highflown and condescending pronouncements.

The irony in all of this is that experts who claim to be more objective than the rest of us are as a rule only more oblivious to their own prejudices and blind spots.