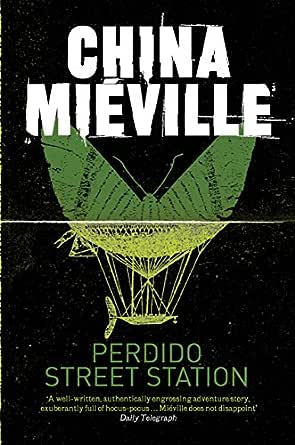 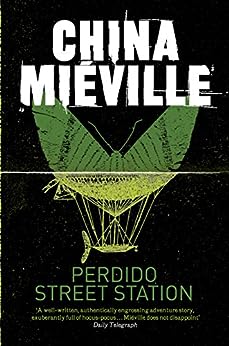 "[A] phantasmagoric masterpiece . . . The book left me breathless with admiration."--Brian Stableford "China Miéville's cool style has conjured up a triumphantly macabre technoslip metropolis with a unique atmosphere of horror and fascination."--Peter Hamilton "It is the best steampunk novel since Gibson and Sterling's."--John Clute

Winner of the August Derleth award, Perdido Street Station is an imaginative fantasy thriller, and the first of China Miéville's novels set in the world of Bas-Lag.

The metropolis of New Crobuzon sprawls at the centre of its own bewildering world. Humans and mutants and arcane races throng the gloom beneath its chimneys, where the rivers are sluggish with unnatural effluent, and factories and foundries pound into the night. For more than a thousand years, the parliament and its brutal militia have ruled over a vast array of workers and artists, spies, magicians, junkies and whores. Now a stranger has come, with a pocketful of gold and an impossible demand, and inadvertently something unthinkable is released. Soon the city is gripped by an alien terror – and the fate of millions depends on a clutch of outcasts on the run from lawmakers and crime-lords alike.

The urban nightscape becomes a hunting ground as battles rage in the shadows of bizarre buildings. And a reckoning is due at the city's heart, in the vast edifice of Perdido Street Station. It is too late to escape.

Constant Reader
4,0 van 5 sterren Not For the Faint of Heart
17 februari 2018 - Gepubliceerd op Amazon.com
Geverifieerde aankoop
This massive tome is the first in the New Crobuson series. It is a dystopian story jammed with a myriad of sentient life forms, plot lines, villains, filth, gore, weapons, sex, poverty, politics, organized crime, moral questions, and techno-babble. Some of it even has a steam-punk feel. China Mieville has a very prolific and detailed imagination. And if he imagined it, it is on the page. This book is not my usual read. Many of the images are grotesque, many are repellant, and some are just flat out gross. That said, it is strangely compelling and engrossing. Isaac is the main protagonist of the tale. He is a free-lance scientist, working in a lab full of pilfered equipment. He leads an unconventional life in an unconventional city, managing to cobble together enough work to provide a living while he pursues his own passions. Lin, an insect woman, is one of his passions. This sort of cross species love is not widely accepted even in this society. They communicate in sign language, and, as strange as their biology may be, their relationship is a love story. Each of them is approached with a special commission. Isaac is asked by a bird man to restore his ability to fly. Yag’s wings had been removed as a punishment by his Garuda society. Lin is an artist and a grotesque Remade crime boss (Motley) commissions her to sculpt him. Her medium is some sort of waxy body secretion that she spits from a gland. Remade are creatures that have literally been remade from parts of humans, machines, and other creatures. Motley is a particularly bizarre combination of many parts. As Isaac dives into his extravagant research of flight he receives a brightly colored caterpillar of unknown species or origin. You know that disaster is looming in that bright little caterpillar. He is not alone. These are very creative monsters. They are resourceful, dangerous, deadly, difficult to defend against, and almost impossible to kill. Much of the book is in the hunt. Warning: a massive, sentient, multi-dimensional spider who speaks in semi-riddles is a prominent character and I don’t even count him as one of the monsters. This is all the stuff of nightmares and strangely enough the monsters both feed on dreams and engender edgy dreams. You may have your sleep haunted as well until you finish the book. The pacing is reasonable and the tension is often high. There were a few passages (particularly the techno-babble) where I flipped the pages quickly to avoid getting bogged down. The sheer number of life-forms and characters is unusual. At times it was overwhelming, but I never lost the story thread. This is a fantasy novel that pushes the boundaries into horror. It is an unusual example of story-telling because of its scope and detail. In the end, I was grateful that it was fantasy because this imagined world is horrific. I read this book because some one that I love and respect told me that Scar (the next New Crobuzon book) may be the best book that he has ever read. I will have to take a break, cleanse my head, and gather my strength before I take it on.
Meer lezen
36 mensen vonden dit nuttig
Vertaal recensie in het Nederlands

DaJamMaster
5,0 van 5 sterren A Great Squishy Adventure
29 april 2018 - Gepubliceerd op Amazon.com
Geverifieerde aankoop
I love science fiction and I also like well written books. Most sci-fi writers are not that literary. They tell a good story, but they have little color. Mr. Miéville is a rare exception. His worlds have soft, biological edges. There is plenty of darkness, and a full sensory experience.

Perdido Street Station centers around Issac, a scientist that combines traditional physics with the thaumaturgical sciences. In this world, magic is science and everyday items are imbued with it.

The steampunk atmosphere of this world is combined with a multidimensional nemesis that seems unstoppable. However, there are other mystic forces at work. The suspense keeps the plot line moving and the characters are broken enough seem real.

Mr. Miéville's world smells, feels, sounds and looks, which is more than I can say for other sci-fi authors, who struggle just to create a full visual landscape. If you are a lover of real literature, give this one a try.

lisally
3,0 van 5 sterren A story lost within an expertly-crafted fantasy world
17 september 2015 - Gepubliceerd op Amazon.com
Geverifieerde aankoop
Perdido Street Station takes place in the fantastical city-state of New Crobuzon, on the continent of Bas-Lag. The massive city is inhabited by not only humans, but a variety of “xenian” creatures both mythological and invented, from cactus people to the beetle headed Khepri. The eclectic city is ruled from the shadows by the little scene yet omnipresent militia, who inflict cruel and unusual punishments on even the smallest offenders, turning them into monstrous creations called “remade.”

Among the city’s residents is human scientist Isaac Dan der Grimnebulin, who receives an unusual commission from a garuda, a bird-human hybrid. The garuda has lost his wings as punishment for an unknown crime, and tasks Isaac with finding a means of restoring his ability to fly. Isaac soon finds himself researching flight in all its forms, collecting a vast menagerie of winged and soon to be winged creatures. Among these specimens is a large, colorful caterpillar of unknown origin, which may not be as innocuous as it seems…

Mieville is a master at creating a setting, and Perdido is full of details and asides that really bring New Crobuzon to life. A decent part of the novel consists of little vignettes that offer a peek into the lives of characters or the inhabitants of some part of the city. This is both one of the novels biggest strengths and weaknesses; while the world-building here is top notch, the main story often drags and gets lost in the details. The central conflict of the novel gets pushed aside at times and doesn’t really become clear until maybe a fourth of the way through the book.

While it can be a bit of a slog, this was a fascinating read with an expertly crafted fantasy setting. Mieville can really make a bizarre setting seem plausible, and the novel is brimming with neat ideas and peaks at other stories. Unfortunately, the main story here often gets lost amid the many streets and neighborhoods of New Crobuzon.
Meer lezen
14 mensen vonden dit nuttig
Vertaal recensie in het Nederlands

GregAusTex
2,0 van 5 sterren Fetid stench of putrescence dripping mucus on a rusted girder
9 maart 2019 - Gepubliceerd op Amazon.com
Geverifieerde aankoop
Have read thousands of science fiction and fantasy novels. Found this one on some "best of" list. Now I'm 130 pages in and very little has happened with the exception of the author constantly, relentlessly describing the surrounding city and it's denizens using the most organic of terms humanly possible.