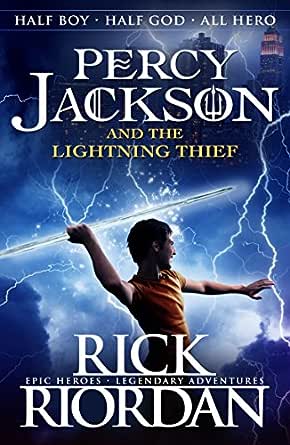 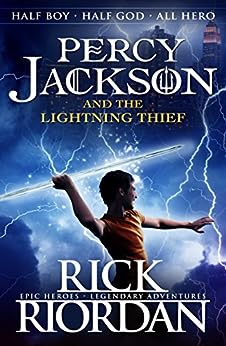 Half boy. Half God. ALL Hero.

Look, I didn't want to be a half-blood. I never asked to be the son of a Greek God.

I was just a normal kid, going to school, playing basketball, skateboarding. The usual. Until I accidentally vaporized my maths teacher. Now I spend my time battling monsters and generally trying to stay alive.

This is the one where Zeus, God of the Sky, thinks I've stolen his lightning bolt - and making Zeus angry is a very bad idea.Sunday Times

Rick Riordan is an award-winning mystery writer. He lives in San Antonio, Texas, with his wife and two sons. Percy Jackson and the Lightning Thief, Rick's first novel featuring the heroic young demigod, was the overall winner of the Red House Children's Book Award in 2006.

Percy Jackson and the Lightning Thief

Percy Jackson and the Sea of Monsters

Percy Jackson and the Titan's Curse

Percy Jackson and the Battle of the Labyrinth

Percy Jackson and the Last Olympian

The Heroes of Olympus series:

The Son Of Neptune

The Mark of Athena

The Heroes of Olympus: The Demigod Files

The Throne of Fire

Kindle Customer
5,0 van 5 sterren I'm 14 and I love this!
2 oktober 2017 - Gepubliceerd op Amazon.com
Geverifieerde aankoop
A flash of lighting shatters the night sky, almost angry. Maybe Zeus is still mad. If you didn’t know about that, then you should really check out the Percy Jackson books. When you read about Percy Jackson’s adventures, like all other awesome books, you feel like you are the main character. You feel like you’ve beheaded a hydra, blown up the Gateway arch, and held a lightning bolt in your hand.

The story starts with Percy warning us about reading it. Like something about if you find something familiar, then close the book immediately. Um, I read it on a Kindle, how can you close a Kindle?

Then it goes on about his life. When his mom takes him on a vacation to the beach away from his abusive stepfather, she tries to get him to a camp to stop a minotaur from killing him. Yeah, a minotaur. On the way there, he finds his best friend has goat legs. Like a lot of other stories, Percy loses consciousness.

When he wakes up, he finds himself in a camp full of half-gods, satyrs, a centaur, and a god of wine that always says peoples’ names wrong. Then he finds that the minotaur has sent his mother to the underworld and he has killed the minotaur. When he finds out he is the son of the sea god, Zeus gives him a death threat because he thinks that Percy took his most powerful lightning bolt.

Then Percy has to go on a quest along America, fighting monsters, metal spiders, and medusa. And then into the underworld. When he does, he finds a terrible mistake…and a traitor. But enough about that! I don’t want to give you too many spoilers.

Yes, I own all of the Percy Jackson books, and all of the Heroes of Olympus, the next series. Rumor has it that there is another series about norse gods and heroes. As Dionysus would say, “You’ve heard of Peter Johnson. Now, get ready for Magno Cheese.” (Magnus Chase)

Gladlands
5,0 van 5 sterren Awesome books for young and old!
4 juni 2017 - Gepubliceerd op Amazon.com
Geverifieerde aankoop
My 10 year old son has read everything by Rick Riordan and absolutely LOVES the series. These books are good enough to tear him away from his iPod and keep him waiting by the mailbox for the next book to arrive! Now I'm reading them too, and we have dinner conversation about Greek mythology and American history. Recommended for any young person learning the joy of books!
Meer lezen
42 mensen vonden dit nuttig
Vertaal recensie in het Nederlands

SA Mathman
4,0 van 5 sterren A teen adventure novel any age can appreciate.
26 juni 2016 - Gepubliceerd op Amazon.com
Geverifieerde aankoop
I bought this book because it was on one of those $.99 lists and I thought, "What the heck." This book took me back 50 years to some of my first pre-teen adventure books, e.g. the Mars series by Edgar Rice Burroughs. The book is written from the standpoint of the protagonist who is pretty much a current pre-teen (I have 2 and one teen) with a wry irreverent sense of humor, as have many of the characters, "We don't say the "c" word." It's not the "c" word you think. The book is fun and fast moving and if you have teen/pre-teens you will recognize a fair amount of their behavior while chuckling at them. The adults are also somewhat caricatures of the typical adult, but probably as many pre-teens see us.
It's fun. If you are an adult read it with your pre-teen, early teen as something to do together or in the car on a trip. You may surprise yourself that you have really enjoyed it.

Michael Piccirillo
2,0 van 5 sterren Not packaged correctly
15 september 2018 - Gepubliceerd op Amazon.com
Geverifieerde aankoop
I recently purchased 12 Percy Jackson softcover books for my 6th grade classroom of students of special needs. I am unhappy with the way my books were packaged. It was packaged in a smaller box which made some of my books bent and ripped. I do not feel it’s right to give my students “new” books if they’re already ripped and bent
Meer lezen

Madison T. Edwards
5,0 van 5 sterren Percy
24 juni 2017 - Gepubliceerd op Amazon.com
Geverifieerde aankoop
This was a book that my son was eager to read. This was a required reading for 5th grade and he finished it pretty quickly.

This is the beginning of the series and Percy Jackson is a very interesting book. I love that it's good for all ages, I enjoyed it as well.

Twelve-year-old Percy Jackson is on the most dangerous quest of his life. With the help of a satyr and a daughter of Athena, Percy must journey across the United States to catch a thief who has stolen the original weapon of mass destruction — Zeus’ master bolt. Along the way, he must face a host of mythological enemies determined to stop him. Most of all, he must come to terms with a father he has never known, and an Oracle that has warned him of betrayal by a friend.