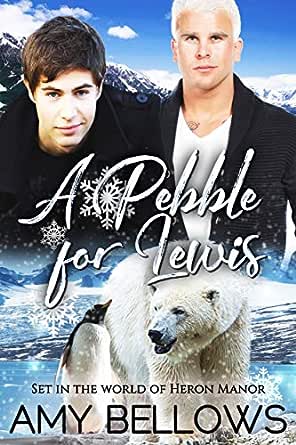 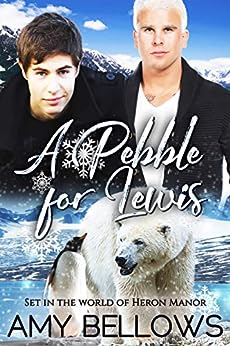 Lewis has never been kissed.

Omega penguin shifters aren’t allowed any physical contact with an alpha until their Pebble Gifting Season, when alphas present a pebble to their desired mate. Lewis has always followed the rules.

Until he meets Todd. A polar bear shifter.

Everyone knows that polar bear shifters are unreliable players who don’t mate for life. But Todd is breathtakingly beautiful, with a body as big as a mountain and a head of thick, white hair. Lewis can’t manage to look away.

In Anchorage Alaska where penguin shifters and polar bear shifters have been at odds for over a century, even a friendship between Todd and Lewis is forbidden. But as Lewis’s Pebble Gifting Season draws closer, their forbidden friendship turns into a passion neither of them can ignore.

A Pebble for Lewis is a 37,000-word best-friends-to-lovers romance with a size difference, knotting, and MPreg of the penguin egg variety. It’s set in the same world as the Heron Manor series, but it stands alone.
click to open popover

I must confess, I did not understand how the writer decided to address the lack of singular third person pronoun without designating a gender. Yes, the English language is sadly lacking in this department and should have dealt with this matter centuries ago, but it didn't. Amy Bellows stated that traditionally, shifter young were not assigned a gender until the cubs/pups/chicks were a few years old. Why? Who knows? So she decided to use third person plural without mention of gender which we do have in the English language. The problem was that this new concept was not clearly specified except in the notes at the end of the book. It was more obvious in Book Two. However, when I have found myself in this position, I know you can ALWAYS manipulate syntax so that you don't have to resort to this. I experimented with this very concept late one evening and was successful in writing the last few chapters of this book without resorting to any third person singular (s/he), nor did I need to use third person plural. It CAN be done without looking stinted.

After much consideration, I decided I would not change my rating. I do love this storyline, but considering that I pulled 1.5 stars from a perfect 5 star review is that there were more problems other than the above s/he issues. I still think the reader did not need to be confused, even if warned in advance within the storyline, not outside the novel in the author's notes. And there were problems with researching and editing. I do wish the storyline alone could have floated it on its own merits...

Now back to the original review.

Can’t do this review without spoilers. Proceed at your own risk.

As a means of trying to keep a bored brain and frail body from crashing, I searched out “Alaskan romance” in the Kindle department. This book popped up. As I’m always for an mpreg story and never heard one taking place in Alaska, I felt this was something different. And it really was… and definitely entertaining in the shifter, MM, and mpreg departments. That was a mouthful.

Length: I’m calling this a shorter novel as it read just a little too long for my standard novella. Its pace was just fine, especially considering the time span that had to be traversed. It’s difficult to write anything romantic when you must jump a year, even two years, without completely losing your audience as well as attempting to maintain the reader’s suspension of disbelief (that’s what crucial!). I was surprised how I didn’t feel like the storyline was being rushed as this really was more of a “day in the life of…” story than it was an action-adventure plot. That impressed me.

World-building: I found the world-creating in this novel to be original for me. Oh, I’ve read a ton of shifter books including mpreg, but I never thought of a polar bear-penguin love story. Sure, it sounds quite far-fetched, but when it’s introduced, it feels quite a natural, and I used to live in this area of Alaska! I had to laugh at the division of Anchorage. Of course! The polar bears would be the artists! And I could easily see the neighborhoods where the polar bear artists worked and sold from. (Including a few eclectic bookstores. You guys from Anchorage know exactly whom I’m talking about!) I can only guess how the pioneering penguin shifters felt when they immigrated from the South Pole towards the North Pole, considering how they would be natural cannon fodder for the polar bears. (This is definitely worth a story or two!) Though I’m not surprised how penguins shifters are being portrayed in a shifter-based Anchorage. Someone has to balance out the polar bear community… maybe in organizational skills. It’s piqued my curiosity as well as my imagination more so than most books have done son in 2019. However, I do have more than a few, annoying problems with its separation of male/female and alpha/omega creations. I mean, since we have male/female characters, is this a same-sex and opposite-sex relationships’ universe? Or just same sex? It’s difficult to tell. Todd talks about his two mothers while Lewis has two fathers. Is this all there is? Lewis’ father talks about not ever having another relationship with an alpha again, so is this their version of same-orientation relationships? Are there any male-female relationships? Not well-explained, I’m afraid.

Characters: These are closely linked to the above world-building. The limited POVs (only two) works out very well here, more like “Polar bear says”, “Penguin says” which is highly appropriate considering the storyline presented. And I do find the comparisons between the standard polar bear shifter (and its accompanying myths) and the standard penguin shifter (and its accompanying myths). Apparently Lewis has more polar bear shifter characteristics while Todd has more penguin shifter characteristics. Or maybe both our main characters appreciate characteristics of each other’s animal. No wonder they attract each other. I appreciate Lewis’ attempt to be open-minded to Todd’s more worldly experience while trying not to disparage his own inexperience of the world in general. After all, he did his post-high-school education online rather than at the local university. I wonder what kind of influence his father had on him for doing so. I do appreciate how much time Amy Bellows took to flesh out these two characters as well as her secondary characters (Danial, Lewis’ father, and Ansel, Todd’s friend). I only wished we could have seen more of Todd’s mothers. (I don’t even know if both were his biologicals or only one was. This universe does confirm that two males (alpha/omega) can procreate, but what about the females? Can male/female do so, too? I wish this was addressed in this book rather than having to wait for the next in the series to say so, one way or another. I guess that’s the biologist in me talking. I like the introspection presented. Yeah, Lewis overthinks a ton, but Todd knows how he thinks and when to interrupt him from continuing to do so. That’s a very wonderful mate for someone like Lewis to have. As for Todd, he needs that stability in his relationship for whatever reason he has yet to voice, but at least he knows what he wants and he goes for his desires and dreams without wavering. His only concern is being upfront and honest to Lewis as well as his own self. That says a lot. One of my problems was… what kind of shifter was Lewis’ father? I checked everywhere, including an in-depth Kindle search. I was led to assumed he has to be a polar bear, but nothing really confirmed that except for Daniel’s initial animosity towards Todd. But that doesn’t mean Lewis’ father was. Daniel could had been anti-alpha as well.

Editing and continuity: This is where I’m taking Ms. Bellows to task here. Yes, there were problems, and it appeared that the last two chapters were a complete miss by whomever was editing or beta-reading. (This should had been picked up by any ARC reader!) I kept seeing: Singular pronoun subject consistently paired with plural possessive! Especially when we’re dealing with twins? Come on! I kept trying to figure out whom she was referring to at the very end!!! This is the main reason why my review is missing 1.5 stars. There were more than a few places where better research should had been done. Sorry, but Alaskans don’t think much of the Chrysler Building as the first thought to come to mind when it comes to tall things. Not buildings. Mountains? Now we’re talking. I would have accepted a Denali reference for something tall (and that’s Denali, not McKinley). Alaskans would first recognize Nature’s tall creations long before something manmade. There were missing words, wrong words, bad punctuation… Too many easy things to correct had this had the usual three read-throughs once everything was set prior to publishing. Looks like more than one person pooped out before the last two chapters. I think someone had a deadline that was not reasonable or realistic.

Despite the above, I was intrigued by this first-of-a-series book, so much that I would be willing to purchase the second one. But this is a novel only for those who like MM mpreg. If you can’t deal with it, then don’t read it. I’m looking forward to seeing what Ansel is like. There is a quick blurb for the next book in this series at the end, and it only makes me impatient to read it! Ansel sounds like a great character to build upon, especially when we’re talking about two omegas rather than the usual alpha/omega situation. That gives the total rating an additional half-star.

Cathy L
5,0 van 5 sterren Such a wonderful holiday tale!
15 december 2019 - Gepubliceerd op Amazon.com
Geverifieerde aankoop
Ok, I'll admit, I was hesitant to read about a penguin and polar bear shifter. However, Amy Bellows wrote the perfect paranormal romance. It had sexy times, and a handsome heck polar bear. I enjoyed reading his description, and learning about their culture.
The penguin shifter, Lewsi, was fierce, and sweet, and lovely to read about.
This book is a story, but also touches upon the issues of prejudice, and stretching social norms. They story is well written, and made me smile. It was a perfect afternoon read, snuggled in bed, watching the cold wind blow, as I read about warm polar bear snuggles, and sweet penguin kisses.
Meer lezen
Een iemand vond dit nuttig
Vertaal recensie in het Nederlands

CCBP
5,0 van 5 sterren Who doesn't love penguins and polar bears
26 november 2019 - Gepubliceerd op Amazon.com
Geverifieerde aankoop
Ok I absolutely love this book. I love penguins and polar bears and this is awesome. I love that it is set in heron world. And Lewis is freaking so cute in mind and Todd so incredible I bet he would be such a cool polar dear person. 100% this book is awesome I can't wait for Daniels happily ever after as well. Lewis is right though watching it happen with a friend would be weird. Can not wait to read.
Meer lezen
2 mensen vonden dit nuttig
Vertaal recensie in het Nederlands

Sabbath
5,0 van 5 sterren A book to fall in love with
22 november 2019 - Gepubliceerd op Amazon.com
Geverifieerde aankoop
This book is an absolute squee fest. I enjoyed Todd and Lewis and their story. Bellows has made me fall in love with these adorably written characters and honestly gave me such a lovely feeling whilst reading. Truly a book to re read.
Meer lezen
Een iemand vond dit nuttig
Vertaal recensie in het Nederlands