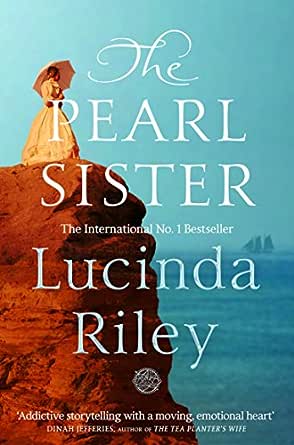 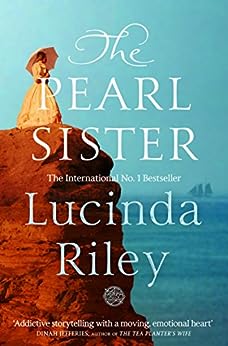 Praise for The Shadow Sister: "Riley's engaging and mezmerizing story of self-discovery and love...can be perfectly read as a standalone. This book will appeal to readers of Edwardian novels and Jane Austen-style fiction."-- "Library Journal (starred review)"

"The Shadow Sister really is Lucinda's best yet. The scope of this series is breathtaking and each book is more captivating than the last"--Iona Grey, author of Letters to the Lost "Daily Mail"

"A deliciously twisting plot with clues cleverly paced along the way. I could hardly wait to solve the mystery of Star's origins. Thoroughly addictive storytelling with a moving, emotional heart."--Dinah Jefferies, author of The Tea Planter's Wife "Daily Mail"

"A unique dual timeline saga, rich with history and setting as well as emotion. This fourth book follows CeCe to discover her roots, as three of her sisters have done before her, but also to discover herself -- and the journey is both heartwarming and heartbreaking. Riley has a distinct gift for setting, and as such the locales along CeCe's travels come alive under her masterful pen. From the beaches of Thailand to the Australian outback to a London flat, the landscapes are vividly drawn and lushly atmospheric. The dual timeline aspect is seamlessly integrated with the story and will keep readers glued to the page, waiting to see how it all connects." -- "RT Book Reviews"

"Brilliantly written. Reading like a stand-alone, it's full of evocative details about cities, the countryside, flora, and fauna, which makes the scenes come alive. Separated by nearly a century, the characters' storylines and dialogue are captivating and hold our interest...Highly recommended."-- "Historical Novel Society"

"Lucinda Riley is one of the strongest authors in this genre of historical fiction. Her ability to weave stories together, using modern-day and historical settings, is top-notich...excellent detail, heart-wrenching romance, and an engaging mystery."--Dinah Jefferies, author of The Tea Planter's Wife "Historical Novel Society"

"Riley's meticulous research and attention to detail immerse readers in historical background and bring CeCe and Kitty to life. Fans of Kristin Hannah, Kate Morton, and Riley's previous novels will adore this."-- "Booklist"

"Set in the bucolic English countryside, this will appeal to fans of Kristin Hannah, Kate Morton, and Riley's earlier novels."-- "Booklist"

The Pearl Sister is the fourth book in the number one international bestselling Seven Sisters series by Lucinda Riley.

CeCe D’Aplièse has never felt she fitted in anywhere. Following the death of her father, the elusive billionaire Pa Salt – so-called by the six daughters he adopted from around the globe and named after the Seven Sisters star cluster – she finds herself at breaking point. Dropping out of art college, CeCe watches as Star, her beloved sister, distances herself to follow her new love, leaving her completely alone.

In desperation, she decides to flee England and discover her past; the only clues she has are a black-and-white photograph and the name of a woman pioneer who lived in Australia over one hundred years ago. En-route to Sydney, CeCe heads to the one place she has ever felt close to being herself: the stunning beaches of Krabi, Thailand. There amongst the backpackers, she meets the mysterious Ace, a man as lonely as she is and whom she subsequently realizes has a secret to hide . . .

A hundred years earlier, Kitty McBride, daughter of an Edinburgh clergyman, is given the opportunity to travel to Australia as the companion of the wealthy Mrs McCrombie. In Adelaide, her fate becomes entwined with Mrs McCrombie’s family, including the identical, yet very different, twin brothers: impetuous Drummond, and ambitious Andrew, the heir to a pearling fortune.

When CeCe finally reaches the searing heat and dusty plains of the Red Centre of Australia, she begins the search for her past. As something deep within her responds to the energy of the area and the ancient culture of the Aboriginal people, her creativity reawakens once more. With help from those she meets on her journey, CeCe begins to believe that this wild, vast continent could offer her something she never thought possible: a sense of belonging, and a home . . .

Annette G.
4,0 van 5 sterren ... sadly, not my favorite one!
14 februari 2018 - Gepubliceerd op Amazon.com
Geverifieerde aankoop
Let me start by saying how much I love the Seven Sisters series, and the way Lucinda Riley tells more than one story in each book. I am always eagerly awaiting the next installment. As with the other books, it was wonderful to follow one of the sisters and to find out what her background was. Unfortunately, I didn't enjoy the story of the Pearl Sister as much as the three previous books. The whole Thailand and Ace part didn't fit into the story, especially given the way the story ended, and was more confusing than helpful in my opinion. The part about the pearl business in Australia could have been interesting but had holes in the story, and Kitty was a character I couldn't find very likable. I liked CeCe as a person, but there were too many coincidences in her journey to make it believable. I didn't want to give the book only 3 stars, 5 stars wouldn't be justified in my opinion, and 3.5 stars are not possible, hence the 4-star review.
Meer lezen
7 mensen vonden dit nuttig
Vertaal recensie in het Nederlands

joycesmysteryandfictionbookreviews
4,0 van 5 sterren A great read
23 januari 2018 - Gepubliceerd op Amazon.com
Geverifieerde aankoop
I was very eager to read this book so ordered it from England as it has not yet released in the U.S.. As in all of the novels in the series, this one is about a sister who was adopted as a baby. CeeCee, learns about herself and her birth family along with the reader. Parts of the novel take place in the present while the story of CeeCee's birth family takes place in the past. The parts of the novel join together well. The characters are vivid and their stories well developed. Australia is the setting for much of the novel and the historical background was fascinating; I learned about pearl divers, the fate of children who were sent to orphanages because of being aborigine and Caucasian and about aboriginal art and beliefs. Some suspension of disbelief is required but I was more than willing. If you enjoy historical/present tense novels with a good story in a long book, this one is for you!
Meer lezen
7 mensen vonden dit nuttig
Vertaal recensie in het Nederlands

Marilyn Rivas
5,0 van 5 sterren The Pearl Sister
12 februari 2018 - Gepubliceerd op Amazon.com
Geverifieerde aankoop
I have lived each book in this series. I love that 's Riley has done her research on each location for her books
I've never been to Australia and loved learning about the Never Never. Riley holds my attention in each of her books. I am eager to read them all. I'm fascinated with her characters. She always spins a great romantic story that you quickly get caught up in. I am suggesting her books to all of my friends. I simply cannot put them down.
Meer lezen
4 mensen vonden dit nuttig
Vertaal recensie in het Nederlands

P. Blevins
5,0 van 5 sterren The best of the series so far
16 februari 2019 - Gepubliceerd op Amazon.com
Geverifieerde aankoop
The Pearl Sister: Seven Sisters Book 4 is by Lucinda Riley. Lucinda Riley has outdone herself on this book. Her descriptions of Australia bring the heat and humidity right into the room with the reader. The story she uncovers about the pearl merchants and their attitude towards the aborigines is horrific. That there were people like Kitty Mercer who looked at them as people is encouraging. Lucinda’s description of CeCe’s life as a dyslexic is troubling. How many people are going through life like she is, unable to read information brochures, maps, and newspapers, not through lack of education; but by a physical disability. Her book makes you think about things you really haven’t thought of in some time if ever. CeCe’s journey to find herself and her art is fascinating.
After Star left for her life with Mouse and Rory, CeCe found herself adrift and somewhat angry. She had protected Star all their lives because Star wouldn’t talk or couldn’t get the right words out. What CeCe hadn’t realized, was how much she had been helped and protected by Star from her dyslexia. She knew she had relied on Star for her school papers and things like that; but to now be completely on her own without Star to interpret, she began to see that she might have been overprotective of Star for her own benefit not Star’s. However, they were both off finding their own lives. CeCe’s was leading her to Thailand and possibly Australia.
In Thailand, she had not taken into account the holiday and found herself without a room. She ended up sleeping in a cave on a private beach when she was caught by security guards. They were dragging her out when Ace, a man she had met earlier on the beach, stepped in. He offered her a room in the house he was staying in. She ended up staying with him for a week, sleeping in his spare room and sharing his dinners. They were getting to know each other or as much as he would expose of himself. He kept his story to himself except for his boyhood in Thailand. He was very secretive and careful that no one knew where he was staying. However, a nosy reporter located him and managed to get hold of a picture of Ace and CeCe. Since CeCe had left early that morning after giving Ace a copy of the photos which the security guard had had developed for her, he assumes she had betrayed him. CeCe knew nothing of this until she finally arrived in Australia to find she had been associating with a wanted man.
Since there is nothing she can do for Ace, CeCe continues her search for her biological family. Ace had started her journey by reading her a book about Kitty Mercer and she manages to continue the story via a CD of her life. Although her life was interesting, the connection between Kitty and CeCe still alludes her. Can she find out?
Meer lezen
Vertaal recensie in het Nederlands

J Stanley
4,0 van 5 sterren Cece's Story
30 januari 2018 - Gepubliceerd op Amazon.com
Geverifieerde aankoop
I love the concept of finding out each sister's story and then still leaving us wondering how it will all tie together (which I hope it will in a much later book?) In this fourth sister's, Cece's, story, the book travels to Australia for her answers. As in the previous books, I find the background story much more interesting and well written than the present day. It's strange how differently they read and how much better the dialogue and characters are in the past stories. Very puzzling. This is definitely a series to be read from book 1. I will definitely be awaiting book 5!
Meer lezen
3 mensen vonden dit nuttig
Vertaal recensie in het Nederlands
Ga naar Amazon.com om alle 296 recensies te bekijken 4,7 van 5 sterren
Ontdek het beste van shopping en entertainment
Gratis en snelle bezorging van miljoenen producten, onbeperkt streamen van exclusieve series, films en meer
> Ontdek Prime
Terug naar boven
Over ons
Verkoop bij ons
Amazon-betaalmethoden
We helpen je graag
© 1996-2020, Amazon.com, Inc. en dochterondernemingen