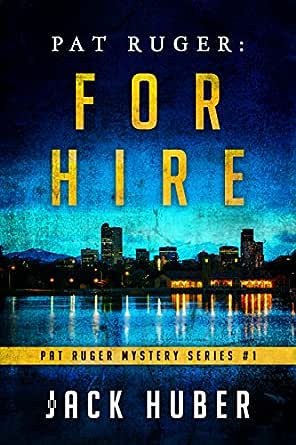 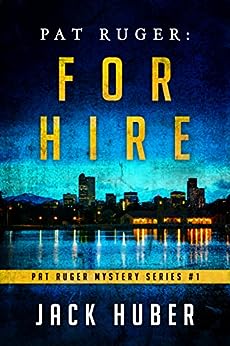 Pat Ruger is a retired detective in Denver, Colorado, who does freelance PI work. An old friend, Angel, is a long-time weed dealer who refers a case to Pat- a missing woman suspected of being kidnapped and radicalized by Islamic extremists. Pat’s new client and her best friend are young women of the street and they eagerly help him recover from mourning over his late wife. When Pat uncovers a terrorist plot, can he find a large explosive device set to kill thousands of people and disarm it in time?
click to open popover

Intriguing storyline with several different cases. Procedures, actions and reactions are not realistic. The characters and dialogue are okay, nothing memorable. The lead character is likeable but it is not reasonable that young women want to have sex with him, and an FBI agent is drinking during lunch and playing barefoot footsie with him. Teenagers chucking a brick through a neighboring rancher's window because they were bored?

Given that this is the author's first in the series I might be interested in other works.
No desire to re-read this story. Remember this is my personal opinion and does not reflect on the author.

Texas
4,0 van 5 sterren Best of several books.
2 juni 2019 - Gepubliceerd op Amazon.com
Geverifieerde aankoop
Pat Ruger: For Hire #1 – This is my first read by this author and I found myself immersed until the last page and then picked up the second book. Well written, but needing some editing – none distracting, with interesting and intriguing storylines. This story could have been written by Joseph Wambaugh. The main characters are developed enough to be interesting; I’m sure as the series goes, we’ll learn more about them. They have good dialog and work well together. The pace was continuous, never slowing down while the storylines merged into an intriguing, substantial read. I did laugh about the sex scenes, not explicit, since they came off as male fantasies; all the sudden this old dude has all types of women, haha. But he is a decent person and I like him, a good main character. I found the sixth book of this series on HiddenGems and discovered I had several Ruger books in my library. 4*

Pat Ruger: Caribbean Shuffle #2 – This story picks up a few months after For Hire ends. Still with the male fantasies, but some explicit now. Unfortunately, this story is not as well thought out or researched; it reads way too much like a D-rated Hollywood movie. Research would have shown how to communicate between ships instead of what was done; also, there is not a Naval man that calls his ship a boat. While the ideas were good, the lack of realism makes the story silly. Still needs editing. 3*

Pat Ruger: Native Species #3 - This story picks up in the same scene where Shuffle ends. As bad as Caribbean was with the Hollywood copying, this story is pathetic. Formatting is inconsistent, which makes reading it difficult. There is an extra space between each sentence, even in the mid of one person’s dialog, which is too Hollywood. AND, every female, especially the young ones, wants sex with Pat. Give me a break. What happened to the guy who wrote For Hire? Get him back, two out of three books that are poorly written and silly make me sorry I found Oblivion on Booksprout. I couldn’t finish this drivel. 2*

Pat Ruger: Oblivion Highway #6 – After reading two flops by this author, this book is similar to his first book, For Hire, which was pretty good. The writing style is similar to FH, unlike the two others, which were too juvenile and Hollywood. The storylines were good. Pat is still a caring, helpful person that almost gets himself killed. There are a couple of new characters that will probably show up in the next book; both are great, a sex therapist and a Lab. The pace is fast and I found the book interesting. Hopefully, the author continues in this vein and doesn’t return to the writing style of the second and third books. I found this book on HiddenGems. 4*
Meer lezen
Een iemand vond dit nuttig
Vertaal recensie in het Nederlands

Charles A. Ray
4,0 van 5 sterren Interesting
14 oktober 2017 - Gepubliceerd op Amazon.com
Geverifieerde aankoop
Retired Denver cop, Pat Ruger, does freelance PI work. When an old friend, weed dealer, Angel, refers a young woman to him, and she asks his help finding her missing sister, suspected of being taken and radicalized by an extremist group, he finds himself up to his waders in drug dealers and terrorists—all out to kill him.
Pat Ruger for Hire by Jack Huber is a fast-paced mystery, laced with humor, spiked with deadly action, and with an explosive climax that will have you on the edge of your chair. While most of the characters are quite believable, I had to strain my brain to believe that Pat was as attractive to every female character he encountered, or that he could keep the pace he did, without eventually needing a pacemaker.
An interesting character, though, and I can imagine he’ll get up to some fascinating adventures in future offerings.
Meer lezen
2 mensen vonden dit nuttig
Vertaal recensie in het Nederlands

IMHO
5,0 van 5 sterren FIVE STARS ! ! !
26 oktober 2016 - Gepubliceerd op Amazon.com
Geverifieerde aankoop
Great NEW SERIES by Jack Huber hit this one out of the park! ( pun intended - read the story! )
Pat Ruger is a retired police detective, and is asked to find a missing person, because the police department
was no longer looking....
If you like mysteries and detective novels, then this is a Must Read!!! And books 2 & 3 are available!!

Please check "Yes" if you have found this review helpful. I rely upon others' reviews to make an informed decision
anytime I make a purchase, so it is my intention to help others do the same. I welcome any questions or feedback.
Meer lezen
5 mensen vonden dit nuttig
Vertaal recensie in het Nederlands

Twostory
3,0 van 5 sterren FBI hires PI
18 september 2016 - Gepubliceerd op Amazon.com
Geverifieerde aankoop
Another retired cop goes into action and saves the day. How many ex-cops does the FBI hire to do their work? This is another "cop consultant" story. Pat Ruger has all the right connections and instincts to solve serious crimes. It's a common basis for detective stories. This one is OK but has some coincidences that favor the outcome of the story. The reader just has to go along with the flow and forget about all the improbabilities that arise. There were a few missing words/typos.
Meer lezen
2 mensen vonden dit nuttig
Vertaal recensie in het Nederlands
Ga naar Amazon.com om alle 55 recensies te bekijken 4,3 van 5 sterren
Terug naar boven
Over ons
Verkoop bij ons
We helpen je graag
© 1996-2020, Amazon.com, Inc. en dochterondernemingen