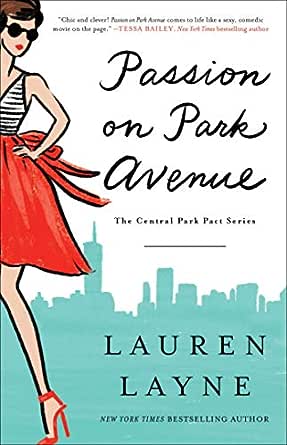 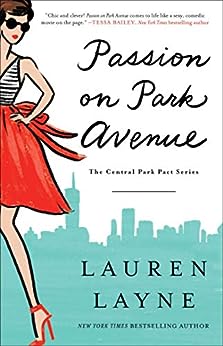 "Featuring wine in coffee mugs, dinner parties with ulterior motives, and Naomi and Oliver being (almost) caught with their pants down, this is perfect for readers who love the dishy women's fiction of Candace Bushnell."--Booklist

"Ms. Layne is off to a great start for a new series of smart and fashionable women not looking for their HEAs that I can't wait to follow."--Harlequin Junkie

"Saucy and fun, this series is off to a promising start."--BookTrib

"The word charm is pretty much synonymous with Lauren Layne . . . a work of genius."--Hypable

"I couldn't put it down! Not only is the friendship between Naomi, Claire and Audrey refreshing and inspirational, the chemistry between Naomi and Oliver is off the charts! I love a sassy heroine and a funny hero and Layne delivers both. Witty banter and an electric connection between Naomi and Oliver kept me turning the pages late into the night. Lauren Layne knocks this one right out of Park Avenue!"--Samantha Young, New York Times bestselling author of Fight or Flight

"A cute and easy story perfect for summer reading, Passion on Park Avenue by Lauren Layne is a flirty fling of a novel."--Fresh Fiction

An Oprah.com Best Romance Novel of 2019!

“Perfect for readers who love the dishy women's fiction of Candace Bushnell.” —Booklist

From the author of the New York Times bestselling Stiletto and Oxford series, the first in a sizzling new series following the unlikely friendship of three Upper East Side women as they struggle to achieve their dreams and find true love and happiness in the city that never sleeps.

For as long as she can remember, Bronx-born Naomi Powell has had one goal: to prove her worth among the Upper East Side elite—the same people for which her mom worked as a housekeeper. Now, as the strongminded, sassy CEO of one of the biggest jewelry empires in the country, Naomi finally has exactly what she wants—but it’s going to take more than just the right address to make Manhattan’s upper class stop treating her like an outsider.

The worst offender is her new neighbor, Oliver Cunningham—the grown son of the very family Naomi’s mother used to work for. Oliver used to torment Naomi when they were children, and as a ridiculously attractive adult, he’s tormenting her in entirely different ways. Now they find themselves engaged in a battle-of-wills that will either consume or destroy them.

Claire
2,0 van 5 sterren So disappointed! What happened?
20 juni 2019 - Gepubliceerd op Amazon.com
Geverifieerde aankoop
I am a big LL fan and have read all her previous books and enjoyed most of them. This one is not up to the standard of LL's usual work: everything was "off" from the the premise, the pacing, the characterization, the dialogue, the chemistry, everything.
The book starts with Naomi going to the funeral of her lover whom she just discovered was married. WHAT? What kind of person would cause that additional pain to the guy's widow? Forget that the plot turns out differently, what was she thinking? And what kind of person is that cruel? And why would I then root for her throughout the story?

Then there is instant friendship with the wife and other girlfriend: the scene, the circumstances and the dialogue just didn't ring true or seem even vaguely believable.
I am very good at suspending my disbelief, and for LL I continued (I'd have put it down if it were any other author,) only to find that Naomi gives up her new place in Tribeca for an upper East Side apartment she didn't know she was even applying for. Now, maybe a confused young person would do that, but not someone who is smart enough to be the owner/CEO of a multi-million dollar company. Nope. Especially for the sake of a vague, ill thought-out revenge plan.

The chemistry between Naomi and Oliver just wasn't there. Naomi is mad at him for most of the book over action he didn't take AS A CHILD! Come on! I'd have overlooked that but the lack of chemistry just made Naomi's anger/enmity and subsequent actions even more improbable. The enemies to friends part was all resolved very quickly and I didn't buy it. I have trouble seeing these two together in the long run.

I know Naomi was in the fashion business but the endless designer name-dropping was tiresome after a while. Whereas it initially helped set the scene for the social circle the story was taking place in, it was too much and I started tuning it all out cause it became very annoying.

Finally the whole thing with the tv producer felt uncomfortable. Was there more of this story line that was inartfully edited out? It also felt "off".

I'm sorry to be so down on this book by one of my go-to authors for light hearted, fun, pick-me-up stories. I gave it two stars because the secondary characters seemed okay and might be more interesting than Naomi and Oliver and their unconvincing romance.

If you are new to this author I recommend skipping this one and going to the Oxford/Stiletto series.
Meer lezen
23 mensen vonden dit nuttig
Vertaal recensie in het Nederlands

RECF
2,0 van 5 sterren About 40% in and Naomi still holds a grudge
15 juli 2019 - Gepubliceerd op Amazon.com
Geverifieerde aankoop
Ok. So I debated about writing this review because I LOVE LL. I have ALL her books and I really enjoyed 99% of them. This one I am giving a two star, one for the book and one more because I really have enjoyed her other books.

I am in agreement with the other reviewer in reference to Naomi holding a grudge. I am at about 40% of the kindle book and the main woman character (Naomi) is still holding a grudge for something the man character (Oliver) did or did not do when he was ten and she was 9. It has been 20 years and she is still bitter about it. Granted, from her perspective it was life changing but I really hate it that she doesn’t want to tell him why she has an attitude with him for something he did when he was ten. This is a big part of the story. I do not tend to like these stories unless the person discloses it at the beginning and then the characters try to resolve it. But it is almost half way through and she is still holding that grudge, it is childish. I just keep on thinking about my own 9 years old child and how childish they can still be. But Naomi is still holding that grudge even after 20 years. This is no “slow burn” but just childish.

Do I dislike this book because I read Prenup right before? Who knows? But spend the money in Prenup by LL instead of this. Especially when the book was over $10. You will not miss anything by not buying this book. I am trying to finish it because I already paid for it.
Meer lezen
9 mensen vonden dit nuttig
Vertaal recensie in het Nederlands

Cara
5,0 van 5 sterren Fantastic New Series!
28 mei 2019 - Gepubliceerd op Amazon.com
Geverifieerde aankoop
There are some authors that you know you're going to enjoy the book. LL is one of those for me. However, even with that said, I was not prepared to be as blown away by Passion on Park Avenue as I was.

Strong, sassy, successful, self-made CEO Naomi's life gets thrown a curveball when her boyfriend dies suddenly. However, the real adventure begins when she meets his wife, and other mistress (neither of whom she was aware of) at his funeral. These three women decide to become friends and support each other as they navigate everything life will throw at them. With the support of these new friends, Naomi sets out to "prove her worth" to those who treated her poorly as a child, including the son of the family who ruined her mother's career.

With all the humor, awkward moments and slow burn of the classic RomComs, complete with a couple "What are you doing Naomi?!" moments, this book hooks you in and the next thing you know it's 2am. This book focuses on not only the chemistry between Heroine and Hero, but the friendship between the woman as well, giving you all the sisterhood feels, as well as the romantic ones. LL doesn't shy away from some heavy topics in this one: cheating, revenge, childhood trauma, homelessness, Alzhimers, and more - yet remains witty and clever.

This book has earned a place on shelf next to the Shopaholic series to be read over and over. I'm not sure I'm going to be able to wait for the next installment!
Meer lezen
6 mensen vonden dit nuttig
Vertaal recensie in het Nederlands