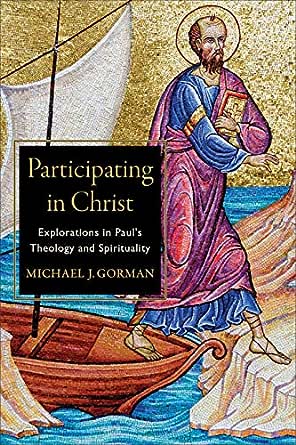 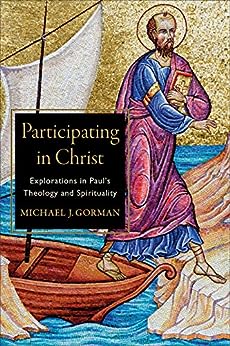 World-renowned scholar Michael Gorman examines the important Pauline theme of participation in Christ and explores its contemporary significance for Christian life and ministry. One of the themes Gorman explores is what he calls "resurrectional cruciformity"--that participating in Christ is simultaneously dying and rising with him and that cross-shaped living, infused with the life of the resurrected Lord, is life giving. Throughout the book, Gorman demonstrates the centrality of participating in Christ for Paul's theology and spirituality.

World-renowned scholar Michael Gorman examines the important Pauline theme of participation in Christ and explores its contemporary significance for Christian life and ministry. One of the themes Gorman explores is what he calls "resurrectional cruciformity"--that participating in Christ is simultaneously dying and rising with him and that cross-shaped living, infused with the life of the resurrected Lord, is life giving. Throughout the book, Gorman demonstrates the centrality of participating in Christ for Paul's theology and spirituality.
Alle bekijken
click to open popover

Pseudo D
5,0 van 5 sterren more than meets the eye
27 september 2019 - Gepubliceerd op Amazon.com
Dr. Gorman sits in the chair of Fr. Ray Brown. He is a Protestant who knows more about Catholic
teaching than most Catholics. For instance, in recent years he endorsed Edward Sri and Curtis
Mitch's book on Matthew, and just last month he wrote the foreword for Brant Pitre et al's book
on St. Paul. In my reviews from a couple of years ago, for EP Sanders I emphasized the themes of
participation, transformation and the Eastern Orthodox notion of theosis or divinization. For NT
Wright's biography of Paul, I stressed 2 Corinthians. So it's pretty cool that in this book Dr.
Gorman focuses on all those themes!

He has a relentless emphasis on justification as participation in Christ, transformation, and
theosis (divinization or deification). The latter idea is primarily Eastern Orthodox (or eastern
patristic) and is especially controversial among Protestants. But Gorman is looking to orchestrate
a dialogue among Orthodox, Catholics and all kinds of Protestants. He also wants to reconcile
the New Perspective on Paul (Sanders etc.) with the more traditional Protestant view on
justification, as well as the apocalyptic or revelatory view. Gorman says that it doesn't have
to be a contradiction. There is legal recognition by God, and there is participatory transformation.
The link is the idea of performative speech, speech that makes something happen. Well
God above all is the one that can do performative speech. His Word makes stuff happen.
In this case, transformation and participation in Christ in the new covenant.

I was flipping through my Bible to compare translations, even the Old Testament with
Isaiah 53 and the suffering servant song. Among the key texts are, of course, Philippians
2 and kenosis. 2 Corinthians 5:21 and around that area, with new creation, reconciliation,
that we might become the holiness of God (a key text for theosis). Then there's Romans,
"Paul's greatest hits", including chapter 6 with its reflection on baptism and what it does.
Gorman has a VERY detailed exegesis of Philippians 2:5, just before the kenosis song.
It is a Christophany and a theophany, because Christ shows what God is like in the Trinity,
and also an ecclesiophany, because it's what the church should be like, and an anthrophany,
because it's what humans should be like. Gorman likes to fiddle with the Greek and English
and make up words and combinations of words, which is kind of fun. There's also lots on
Galatians, of course, being a key letter for the doctrines on justification.

The last chapter is in fact a reflection on the importance of the resurrection and how it
has been deconstructed in the modern world (naming Rudolf Bultmann, Robert Funk
and John Spong). The penultimate chapter is on western culture and social justice,
written in St. Paul's voice. It is a critique of nationalism, materialism, hedonism, militarism,
etc. My biggest disagreement with Mike was always on pacifism, not Catholic or Protestant
doctrine. I'm not a hawk, I'm a dove but I'm not a complete pacifist. In this book, Gorman finally
addresses the pacifism of Richard Hays and himself in a way that I appreciated and that can
be a point of dialogue.

Jacob Wilson
5,0 van 5 sterren A Fresh Look at Paul
24 oktober 2019 - Gepubliceerd op Amazon.com
"Participation in Christ" is a collection of linked essays and arguments on the ideas of cruciformity (our participation in being transformed into and by the crucified Christ), theosis (that we become like God in this transformation), co-crucifixion and co-resurrection (the idea as participatory), and Christ's crucifixion as both a Christophany and a Theophany. Not only that, but also an ecclesiophany (revealing of the nature of the church) and an anthrophany (revealing the nature of true humanity).
•
All of those words are Gorman's style. Throughout the essays he provides a detailed exegesis of key texts like Philippians 2:5 (where participatory language introduces the famous kenosis poem), 2 Corinthians 5:21 with themes of new creation, reconciliation, and participation in God's holiness, as well as Romans and Galatians. There is so much in this book that's worth reading.
•
In the end though, Gorman begins tying together traditional understanding of justification with the New Perspective (where justification is both judicial and participatory). He also begins an important conversation between themes of Protestantism, Catholicism, and Eastern Orthodoxy, but does so in a way that is exegetically satisfying and worth reading. This book is highly academic, highly theological, and will be hotly debated in the coming months. **book graciously provided by Baker Academic for an honest review
Meer lezen
3 mensen vonden dit nuttig
Vertaal recensie in het Nederlands

Marissa Baker
5,0 van 5 sterren An excellent academic work on Pauline theology
14 november 2019 - Gepubliceerd op Amazon.com
“Participating in Christ” is exactly the sort of Christian non-fiction that I like to read. Michael J Gorman's careful, in-depth reading interprets Paul within the context of old testament scriptures, Paul's other writings, and his culture. Gorman's examination of what it means to participate in Christ dives deep into the scriptures and puts Paul's writings into a context that I think modern readers often overlook.

The writing for this book is very academic, and if you come to it looking for something easy-to-read then you might be tempted to give up partway through. However, the writing is still very accessible to readers who (like me) don't have formal training in theology. Just know going into it that this book will require some patience. I like deep, academic books but they require a little extra effort to digest and this one took me quite a while to read. I also started to feel a little lost near the end, where Gorman spent several chapters tracing one argument and it became a bit difficult for me to follow as I read it over the course of a few weeks.

Overall, though, I thoroughly enjoyed this book and I keep coming back to it as a reference when studying, most recently while writing a blog post about identifying as part of the community that exists in Christ. I highly recommend “Participating In Christ” to those who want to learn more about what it means to be part of Christ's body or who are looking to read a book that will make them think deeply about the Christian faith.