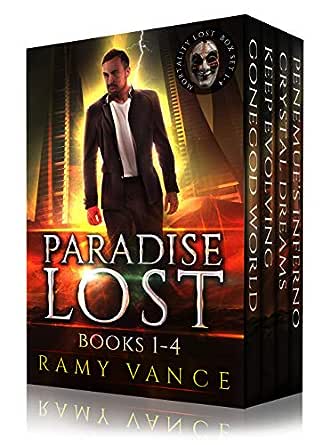 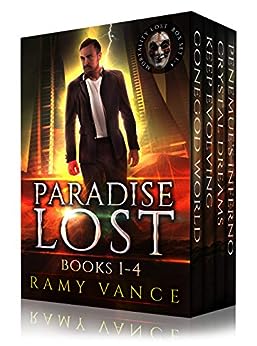 The gods are gone. All of them.

Grab all four books in the thrilling Urban Fantasy series, Paradise Lost, for one low price, in this great value 1800+ pages box set!

Then the Others came.


Jean Matthias, ex-monster-killer, is now trying to help them adjust to this new godless world.

Everyone from his past thinks he’s dead. In order to keep helping the displaced mythical creatures that now roam the world, he’s going to need it to stay that way.

Except-something is terrorizing the night.

A murderous creature is unearthing parts of his past best left dead and buried. If the wrong people find out he’s still breathing, he'll be forced back into a life he died to escape.

And to make matters worse, if the creature isn't stopped, it might just trigger the apocalypse. Again.

Jean didn’t start this fight, but he’s damn sure going to end it.


If you like the Dresden Files, Mercy Thompson or want to read a throwback to Angel and Buffy the Vampire Slayer, then you’ll love the Paradise Lost Boxed Set.


"Mythology, satire, and brutal honesty. Vance delivers a knockout punch of fun and fearlessness in every last one of his books. Not only does he make you laugh, he makes you think. That's a rare combination that few authors ever achieve, and Vance does it splendidly." — John P. Logsdon, author of the Paranormal Police Department series.

What readers are saying about the series:

★★★★★ ‘GoneGodDamn, I was completely charmed by this story.’

★★★★★ ‘Fun book along the lines of American Gods and Harry Dresden.’

★★★★★ ‘A new and refreshing take on a genre that I thought I'd read most permutations of.’

★★★★★ ‘A thoroughly enjoyable read with marvelous world-building. I am looking forward to reading the rest of the series.’

★★★★★ ‘To say that this set of books is unique, would be a vast understatement.’

★★★★★ ‘Loved, loved, loved this book! Immediately put myself on his email list so I wouldn't miss his next ones. Finally a fantasy book with a new premise. And it's a good one! Awesome book.’

★★★★★ ‘It's as if Borges' Book of Imaginary Beings married a graphic novel and had an action adventure baby in Neverwhere.’

★★★★★ ‘I was immediately pulled into the gritty, beautiful world which Vance creates. The system of magic is simple and elegant.’


The Paradise Lost Boxed Set is the first 4 novels of the Keep Evolving Series and takes place in the GoneGod World...a unique setting of myths, magic and mischief. But what is the GoneGod World?

Four years ago, the gods left. All of them. Their last message to humanity was "Thank you for believing in us, but it is not enough. We're leaving. Good luck."

At first no one took them seriously. Until, that is, all the denizens of all the heavens and hells started showing up on people's doorsteps.

Creatures from every religion, mythology, folklore or fairytale now live among us, mortal and homeless. Trouble is, after eons of living forever, elves, dragons, dwarves, oni-demons, even friggin’ Medusa aren't very good at being mortal.


Welcome to the GoneGod World...where myths are real and paradise is truly lost.

Scott B. Allan
5,0 van 5 sterren Welcome to the GoneGod World...where myths are real and paradise is truly lost!
2 juli 2019 - Gepubliceerd op Amazon.com
Geverifieerde aankoop
Wow...4 great books for this price and I couldn't resist. What a super-cool boxset. I have been into this author's work since he started the GoneGod World series and it is great to see these now available together. Tons of great value here! If you are new to the series, get the boxset and start working your way through these books. You'll be hooked before you are done the first one.

"Mythology, satire, and brutal honesty. Vance delivers a knockout punch of fun and fearlessness in every last one of his books. Not only does he make you laugh, but he also makes you think. That's a rare combination that few authors ever achieve, and Vance does it splendidly." — John P. Logsdon, author of the Paranormal Police Department series.

What is in this boxset?
The Paradise Lost Boxed Set includes the following novel:

Over 1800+ pages of magic, mischief, and mayhem fill this fantastic urban fantasy boxed set!
What I like about this series is the imagination behind all of the creatures and GoneGod World. RE Vance has really created a unique world that draws you in...and keeps you there until the end. But that is just the beginning...the stories hold you over the cliff for a while before letting go, and then you are whisked down into the world of the GoneGod Paradise.

Warning: Read at your own risk. These stories could be addictive!

Kindle Customer
5,0 van 5 sterren Roller coaster ride
8 juli 2019 - Gepubliceerd op Amazon.com
Geverifieerde aankoop
Jean-Luc is an extraordinary character. You'll be hooked from the start! Paradise Lot is where the most diverse group of beings have learned to mostly co-exist. If you love Urban Fantasy, mythology, supernatural and paranormal beings, as well as characters that have depth, are complex and unique, and evolve then you will not be disappointed. The addition of Penemue's Inferno in this box set is killer! For anyone that has read the books when they first released, trust me when I say that you will absolutely NEED to read this story.
Meer lezen
4 mensen vonden dit nuttig
Vertaal recensie in het Nederlands

JennsPage
5,0 van 5 sterren Best GoneGodamn Series I've read in a long time!
2 juli 2019 - Gepubliceerd op Amazon.com
Geverifieerde aankoop
If you love UF but long for a new take on its tropes then you'll love this series. The author does an amazing job of presenting familiar characters in new and seriously entertaining ways. The world building is top-notch and you'll find yourself losing sleep wanting to know what happens next in the GoneGod World.
Meer lezen
5 mensen vonden dit nuttig
Vertaal recensie in het Nederlands

There were, however, a few things I didn't like as much. One was a bit too much "narrative causality": I sometimes felt that how the world works is somewhat arbitrary, rules keep changing to pave the way for the plot.

Another problem I had that Book 4 ends very abruptly, leaving you hanging with the thought "Yeah, and what happens after...?" (This really goes for Books 1 to 3 as well, but since I read them one after the other, it wasn't as apparent.) Come on, the series needs a winding down, it needs to tie off loose ends, so that the reader has some time to say goodbye to those well-loved characters.

And my final gripe: it needs proofreading. Badly. Lots of typos.

G-Money
4,0 van 5 sterren Epic tale of the aftermath of Exodus of the Gods...
4 augustus 2019 - Gepubliceerd op Amazon.com
Geverifieerde aankoop
Not a dull moment in these stories! The humor, the despair, the very real feels of the tragedies and light-hearted moments taking place in Paradise Lot, all keep the stories riveting and moving along. I LOVED IT ALL! Can't wait to read the rest that will follow as I'm now fully invested in the plight and hopefully a future redemption of the Others, either by their God's or their eventual acceptance by most humans. Great story!

I gave this boxset 4 stars because the spelling errors and grammatical errors were a bit much.