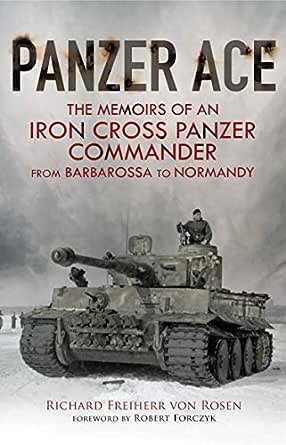 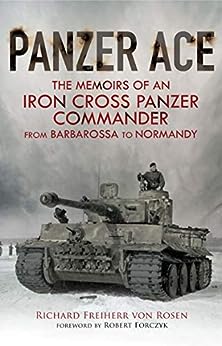 "This book will make for an excellent read for those that enjoy memoirs of soldiers exploits on the battlefield and there time in World War Two. Tons of pictures of various Panzers and other German military vehicles and equipment that will sure to please the modeller. Recommended"--InScale

Richard Freiherr von Rosen was a highly decorated Wehrmacht soldier and outstanding panzer commander. His memoirs are richly illustrated with contemporary photographs, including key confrontations of World War II.After serving as a gunlayer on a Pz.Mk.III during Barbarossa, he led a Company of Tigers at Kursk. Later he led a company of King Tiger panzers at Normandy and in late 1944 commanded a battle group (12 King Tigers and a flak Company) against the Russians in Hungary in the rank of junior, later senior lieutenant (from November 1944, his final rank.)Only 489 of these King Tiger tanks were ever built. They were the most powerful heavy tanks to see service, and only one kind of shell could penetrate their armor at a reasonable distance.Every effort had to be made to retrieve any of them bogged down or otherwise immobilized, which led to many towing adventures. The author has a fine memory and eye for detail. His account is easy to read and not technical, and adds substantially to the knowledge of how the German Panzer Arm operated in the Second World War.
Alle bekijken
click to open popover

Mike Barnett
5,0 van 5 sterren Great German Memoir!
5 augustus 2018 - Gepubliceerd op Amazon.com
Geverifieerde aankoop
This memoir was probably the best one I've read from a German Army soldier, right beside "The Forgotten Soldier" by Guy Sajer (which was a bit longer, more eloquent, and contained a bit more detail about his day-to-day ordeals facing the Russians). The fact that this memoir was written from the perspective of a Tiger tank commander on both the Eastern & Western fronts makes it especially valuable and rare.

It is the perfect compliment to the J.J. Fedorowicz publication (from 2000) of "The Combat History of Schwere Panzer-Abteilung 503" of which the author was a part (he also contributed heavily to this Fedorowicz volume, thus there is some duplication of information). There are many photos previously unpublished, as mentioned by other reviewers; some coming from the author's private collection and some from other surviving members of his unit.

There are also numerous details that would assist military modelers such as the individual tank numbers of the Tigers in his company, things they carried on the outside of their tanks, and many interesting battle details from both fronts. I was particularly interested in the chapters on his experiences in the Normandy Campaign, one of my main areas of interest. But even the chapters on the Russian Front were fascinating and riveting.

I found this book hard to put down, and how many times can one say that about a war memoir, particularly from a German soldier? The author had a keen eye for details of interest and writes in an engaging manner. It's almost as good as those I've read that were written by professional journalists.

I am very glad this volume was translated from the original German edition, allowing me to happily add it to my personal library. I highly recommend it if you have even a passing interest in W.W. II and veteran accounts. As a German memoir it is one of the best and may be the best memoir of a Tiger tank commander. There just aren't that many out there. A rare gem!

John Pyskaty, M.S.
5,0 van 5 sterren Photos alone worth the price of book
18 april 2018 - Gepubliceerd op Amazon.com
Indeling: Kindle-editieGeverifieerde aankoop
I originally had been worried that this might be fiction pretending to be non-fiction having seen a Youtube video that described another book on Tiger Tanks as questionable. This is most certainly not the case here. The book is packed with photos of the author with panzers in various locations as s well as photos of different German military documents with his name.

A most amazing book detailing whst it was like to be a commander of Tiger tanks. Certainly he was amazingly lucky to survive the war though he went from battle to battle to hospital and back to battle again. If you like tiger tanks, you are used to seeing the same photos used over and over again in different books. This books was filled with photos I had never seen before, sharp, high quality images. The number and quality of the photos alone are worth the price of the book. It is an extremely good read, well written, and exciting.
Meer lezen
38 mensen vonden dit nuttig
Vertaal recensie in het Nederlands

F. Carol Sabin
5,0 van 5 sterren A personal history
30 april 2018 - Gepubliceerd op Amazon.com
Geverifieerde aankoop
Richard von Rosen’s riveting and reflective combat memoir vividly conveys the frontline realities of different theatres of operations of the WW II. The narrative is told with the vivid detail of an impassioned eyewitness and his rare and moving memoir is a first person chronicle of nightmarish experiences.

The book is divided into 10 chapters (with nice presentation of main events during the period described) and I was glad to see professional forewords by dr. Robert Forczyk and also the author.
After the first chapter (“The second World War begins”), the author described in Chapter II’s 100 pages his first battles during the opening phase of Operation Barbarossa (“On the Eastern Front June – August 1941”). Operations at Stary Bychow, Breaking through the Stalin line or Battle for Roslav - where author was wounded for the first time - are excellent descriptions of the daily tanker’s life and sacrifices.

Author’s convalescence and additional training are detailed in”My quiet time in the Reich (February 1942 - January 1943) before going “Back in Russia (January-May 1943)” as tank platoon leader to participate in the bitter fights for Rostov. The story of the Battle of Kursk -“Operation Zitadelle (June-July 1943) - includes the encounter with SU 152, stepping on a mine (engineer training before operation paid off) or his second wound on 14.07.1943.

After another year, his unit was transferred to France to fight against Allied forces. The next two chapters, “The invasion Front, 1944” and “Operation Goodwood” are filled with Western Front experiences.
“At Sennelager Camp (September-October 1944)” is a very short chapter about a training/reorganization period with more information from photos than text. One photo shows unteroffizer Kurt Knispel, tank ace at 23 years old with over 160 kills (KIA 28.04.1945).

Chapter IX - “The Collapse (1944-1945)” describes the armored operations in Hungary (military coup included) and also the Battles for Gyongyos, Szolnok, etc. Wounded for the third time, Oblt. R. von Rosen is hospitalized in a Luftwaffe hospital in Bratislava.
In the last three chapters “Military Hospital and the End of the War (February-July 1945)”, ”Home Again” and ”A prisoner of the French”, the author recalls the humiliation of defeat and surrender, but also the brutality of French occupation.

Eventually, worth mentioning is the von Rosen’s resume at the end of book. In 1955 he (re)started a military career being commissioned into Bundeswehr as Hauptmann and he retired as major-general in 1980.
The book is filled with an impressive number of contemporary photos (over 400), plus some sketches. Some photos have even some interesting (tactical) comments. Sometimes I found disturbing to start a narrative just to be interrupted by more than 10 pages of illustrations. I had to flip back several pages in order to remember the initial phrases. As throughout the text, the photo captions pay a special tribute to his former comrades and friends.
The volume ends just with a short epilogue and no notes or index sections are provided.
One of the more valuable WW II memoirs! Recommended!
Meer lezen
34 mensen vonden dit nuttig
Vertaal recensie in het Nederlands