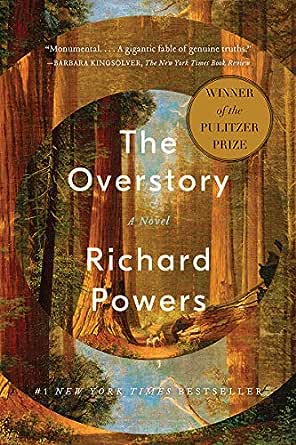 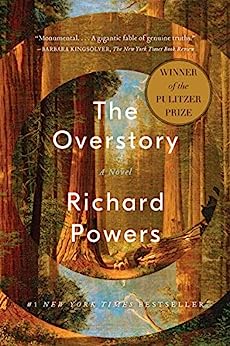 The best book I've read in 10 years. It's a remarkable piece of literature, and the moment it speaks to is climate change. So, for me, it's a lodestone. It's a mind-opening fiction, and it connects us all in a very positive way to the things that we have to do if we want to regain our planet.--Emma Thompson

Should be mandatory reading the world over.--Emilia Clarke

A towering achievement by a major writer.--Robert Macfarlane, author of Underland

An ingeniously structured narrative that branches and canopies like the trees at the core of the story whose wonder and connectivity echo those of the humans living amongst them.--citation from the Pulitzer Prize in Fiction

A big, ambitious epic.... Powers juggles the personal dramas of his far-flung cast with vigor and clarity. The human elements of the book--the arcs his characters follow over the decades from crusading passion to muddled regret and a sense of failure--are thoroughly compelling. So are the extra-human elements, thanks to the extraordinary imaginative flights of Powers's prose, which persuades you on the very first page that you're hearing the voices of trees as they chide our species.--Michael Upchurch

This ambitious novel soars up through the canopy of American literature and remakes the landscape of environmental fiction.... Remarkable.--Ron Charles

This book is beyond special.... It's a kind of breakthrough in the ways we think about and understand the world around us, at a moment when that is desperately needed.--Bill McKibben

Powers is the rare American novelist writing in the grand realist tradition, daring to cast himself, in the critic Peter Brooks's term, as a 'historian of contemporary society.' He has the courage and intellectual stamina to explore our most complex social questions with originality, nuance, and an innate skepticism about dogma. At a time when literary convention favors novelists who write narrowly about personal experience, Powers's ambit is refreshingly unfashionable, restoring to the form an authority it has shirked.--Nathaniel Rich --Deze tekst verwijst naar de paperback editie.

Richard Powers is the author of twelve novels. His most recent, The Overstory, won the Pulitzer Prize in Fiction. He is also the recipient of a MacArthur Fellowship and the National Book Award, and he has been a four-time National Book Critics Circle Award finalist. He lives in the foothills of the Great Smoky Mountains. --Deze tekst verwijst naar de paperback editie.

Leda D. Schubert
5,0 van 5 sterren and the love people are capable of
18 april 2018 - Gepubliceerd op Amazon.com
Geverifieerde aankoop
I finished this magnificent, life-changing book 1/2 hour ago, and I hope to read it again soon. Powers takes on the single most important topic of our time: the effects of humans on the planet and the possibility of a future. Through 9 varied characters, he brings to life the old forests, the lives of individual trees, the quest for AI, and the love people are capable of, among other themes. It's a tour de force of creation and, at 500 pages, it could have gone on forever and I would have been happy. It will also break your heart, but it's not completely without hope. Highest recommendation.
Meer lezen
819 mensen vonden dit nuttig
Vertaal recensie in het Nederlands

Aran Joseph Canes
5,0 van 5 sterren A Most Extraordinary Walk in the Park
8 april 2018 - Gepubliceerd op Amazon.com
Geverifieerde aankoop
When looking for a literary analogue, The Overstory is almost something of a Dostoevskian novel. The themes are different of course—-Powers is not interested in discussing God or the basis of morality—but one does get the sense in reading the Overstory that the plot, characters and various literary devices are all at the service of the author’s philosophical vision. And by philosophical I don’t mean esoteric fine points of metaphysics but the larger question of the future of life on earth—in both Powers and Dostoevsky there is almost a return to the themes of ancient apocalyptic writings.

While Powers certainly doesn’t need authentication of his narrative power—he has already won a National Book Award among many literary prizes—I can vouchsafe that he is an excellent storyteller. Similarly, his ability to create characters that may stretch the bounds of believability but still generate passionate sympathetic feelings in the reader is also beyond doubt.

Thus, I found myself reading the Overstory with every free moment I had over two days and loving nearly every page.

The overarching philosophy of the work is that human beings, either willfully or not, do not understand the amount of destruction they are causing to the world’s flora. Plants and trees, one of the oldest of the earth’s kingdoms, are only now beginning to be understood as beings that communicate, learn and in some instances even care for their own offspring. The human caused biocide of the world’s flora is a tragedy not only because these trees may have medicinal or other useful properties for humans but also because each one is a beautiful product of nature fashioned over millions of years. In the author’s view, we seem to be destroying some of the most important parts of creation, so that everyone can, so to speak, have a bigger projection screen TV.

Nor are biofuels, renewable energy or other technological fixes likely to stem this downward spiral. Even virtual reality is only going to be as interesting as the humans who create it and so cannot be a genuine substitute for the complexity of what nature provides for us gratis in the real world.

The author seems to envision only two scenarios: either humankind will wipe itself out and the earth will generate new, unforeseeable solutions to life or artificial intelligence will impose a solution on a humanity which cannot save itself.

To those who have read optimistic works like Steven Pinker’s Enlightenment Now or related perspectives such environmental pessimism is somewhat startling. I can’t say that I am fully persuaded by Powers’ perspective but I can appreciate the accuracy of his science, the literary craftsmanship that went into embodying these ideas and the importance of his overall message.

So, if you are willing to endure a literary punch to the stomach and put on apocalyptic glasses then you will thoroughly enjoy The Overstory. But, though a love of trees thoroughly permeates the book, it is hardly a walk in the park.
Meer lezen
660 mensen vonden dit nuttig
Vertaal recensie in het Nederlands

Burt J. Kempner
5,0 van 5 sterren I read this remarkable book with mounting awe
21 april 2018 - Gepubliceerd op Amazon.com
Geverifieerde aankoop
A wise, deep, moving epic by an exceptional writer. I was totally entranced. There are fabulous stand-alone set pieces, engaging characters, glorious prose and a soul-stirring look into the inner lives of trees. It’s one of a handful of books of which I can say I was a different person when I finished it. Bravo, Mr. Powers. This may very well be your masterpiece.
Meer lezen
352 mensen vonden dit nuttig
Vertaal recensie in het Nederlands

Sunny
3,0 van 5 sterren Two-thirds wonderful.
20 september 2018 - Gepubliceerd op Amazon.com
Geverifieerde aankoop
This book could have been two-thirds as long and been the better for it. I mistakenly thought the book was all short stories and if that had been the case, it would have been magical. The “short stories” were the best I have ever read. The middle allowed all the characters to develop the “tree theme” and that, too, was well done. By the final third, it was all hippy-dippy, tinfoil hat, stream of conscious waste of the trees it took to write the book. Sometimes, you just have to STOP. Or get a better editor.
Meer lezen
303 mensen vonden dit nuttig
Vertaal recensie in het Nederlands

lapidaryblue
5,0 van 5 sterren Wow! Powerful doesn't begin to summarize it.
14 mei 2018 - Gepubliceerd op Amazon.com
Geverifieerde aankoop
How have I lived and read this long and not known of Richard Powers? What a writer and what a book.

If I were still in my 20s or even 30s I would be buying copies of this book and thrusting them all on my friends and telling them it is a must read. Now that I'm considerably older than that, I'm not so naive. You have to come to it of your own. The trees themselves will call you do it, just as in the book.

Of course, it's a clarion call to our species to stop wreaking havoc on the earth and all its species, including our own. And, of course, it is a cry in the dark. We will destroy ourselves and then the planet can begin to recover. It's happened many times during the earth's long history and will happen many times again. Too bad for us. Let's hope some of those magnificent giants out live us to help heal earth after we have destroyed it.