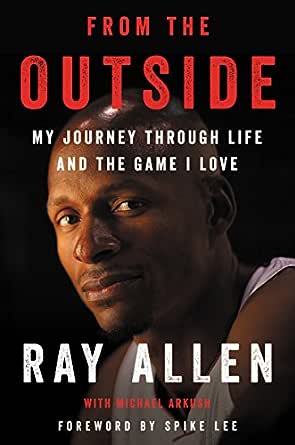 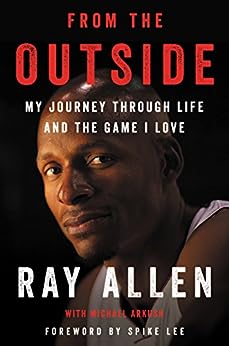 From the Outside: My Journey Through Life and the Game I Love (English Edition) Kindle-editie

The record-holding two-time NBA champion and recently inducted hall-of-famer reflects on his work ethic, his on-the-court friendships and rivalries, the great teams he's played for, and what it takes to have a long and successful career in this thoughtful, in-depth memoir.

Playing in the NBA for eighteen years, Ray Allen won championships with the Boston Celtics and the Miami Heat and entered the record books as the original king of the three-point shot. Known as one of the hardest-working and highest-achieving players in NBA history, this most dedicated competitor was legendary for his sharp shooting. From the Outside, complete with a foreword by Spike Lee, is his story in his words: a no-holds-barred look at his life and career, filled with behind-the-scenes stories and surprising revelations about the game he has always cherished.

Allen talks openly about his fellow players, coaches, owners, and friends, including LeBron James, Kobe Bryant, and Kevin Garnett. He reveals how, as a kid growing up in a military family, he learned about responsibility and respect—the key to making those perfect free throws and critical three-point shots.

From the Outside is the portrait of a gifted athlete and a serious man with a strongly defined philosophy about the game and the right way it should be played—a philosophy that, at times, set him apart from colleagues and coaches, while inspiring so many others, and lead to the most pivotal shot of his career: the unforgettable 3-pointer in the final seconds of Game 6 of the 2013 NBA finals against the San Antonio Spurs. Throughout, Allen makes clear that success in basketball is as much about what happens off the court as on, that devotion and commitment are the true essence of the game—and of life itself.

DaveSincere
4,0 van 5 sterren Very thoughtful inside look into the life of Ray Allen
31 juli 2019 - Gepubliceerd op Amazon.com
Geverifieerde aankoop
I must say... I like biographies and autobiographies but I only read about the great ones or people who've been through a lot.

Ray Allen's story intrigued me... I'm a little bit older than Ray so I can remember him playing for UConn as I was in college as well. He was a beast in the NBA Sega Genesis Games for Seattle and Milwaukee. He's one of the greatest pure shooters who also has super exceptional athletic ability (Just Youtube Ray Allen Highlights). This guy used to jump out the gym and didn't mind giving it to anyone.

So to read about his life and stories was like being a fly on the wall at his games in certain times of his life. From his battles with Kobe and Michael to his time in Milwaukee, why KG, PP and Rajon hate him to why he chose Miami and Lebron over signing with Boston. He discusses it all and it makes sense. KG and the rest of the Celtics were in their feelings. When you get to the NBA you have to do what it takes to take care of your family, that's really the endgame of it all. So KG, PP and Rondo being mad at him for going to Miami to make money and win a championship is straight bull. Miami offered less than Dallas, but who WOULDN'T go to Miami to play with D Wade and Lebron.. Those guys kill me now they're mad at Ray.. Screw em'..

I was happy with this book and I think you will be too. Very good read about Ray's life and how he remains humble. I honestly think he could've played another 2-3 years if he wanted.. but only an athlete knows when they're ready to hang the sneakers up.

Rick Shaq Goldstein
4,0 van 5 sterren RICK “SHAQ” GOLDSTEIN SAYS: “WHAT SUCCESS HAS ALWAYS REQUIRED... COMMITMENT… DAY… AFTER DAY… YEAR… AFTER YEAR”
29 maart 2018 - Gepubliceerd op Amazon.com
Geverifieerde aankoop
As a career long admirer of eighteen-year NBA veteran … and two-time NBA Champion… and portrayer of Jesus Shuttlesworth… in Hollywood… Ray Allen… this autobiography… has been a long time coming. The author’s writing style… is straight forward… and lean… in the area of “pomp-and-circumstance”… not unlike the author’s ball playing persona.

Ray was an Air Force “brat”… which meant… home was here… home was there. This added to Allen’s inability to fit in and feel accepted. This is one of the two main perspectives… or mantras… that are the ongoing cores of his story. The author felt… unaccepted… for many reasons. Being far from rich… and having a very limited wardrobe… being black… and even “criticized”… for sounding “white”… when he talked. Additionally… whenever I hear or read about someone who says “My Father never told me he loved me”… I get a feeling that is deeper than being sad. Even all these years since my childhood… and being a Father and Grandfather… and always being open with my love… it strikes me… as almost a sin against humanity. Ray… states he was such a deprived child.

Ray never took any basketball accomplishment for granted… he was ready for every challenge to be a success… when he states words that should be chiseled in the walls of eternal success… “IT REQUIRES WHAT SUCCESS HAS ALWAYS REQUIRED: COMMITMENT, DAY AFTER DAY. YEAR AFTER YEAR.” Ray came to practice earlier… and left later… than just about everyone else. From day one… he never took success for granted… he put in the sweat AND time AND unrelenting effort! Ray admits mistakes made along the way… from recounting his college recruiting trips… where he found he was more immature than he had originally admitted. From being slighted by Rick Pitino… on a visit to Kentucky… to making a premature commitment to Alabama. After committing to UConn… (Decency… Integrity… Honesty)… the enormous personal growth under Coach Calhoun… and his unwavering dedication to getting better… even if it meant sitting in his room alone… while his less dedicated teammates went out and partied.

Ray’s long NBA career included many accolades and awards… but perhaps… the most meaningful… didn’t appear in the newspapers… or on plaques… or trophies. They were the private words of awe and respect… and understanding… by competing teams owners… coaches… players… trainers… and teammates… when they years later would tell Ray… that unbeknownst to him… they were watching him… in awe… from the shadows… while he day by day… year by year… pushed… AND… demanded… to put himself… through hundreds of extra shots… extra exercises… so it would be… second-nature… when it was all on the line… like it was in game six of the 2013 NBA Championship series for the Miami Heat… against the San Antonio Spurs. One of the greatest… most clutch shots in NBA history… led to the Heat being able to survive for a seventh game and a Back-To-Back-Championship. Ray reminds the world in this book… that he was getting ready for that moment… that second in time… ever since he was a youngster and saw Michael Jordan on TV. (Though his favorite player was Michael Cooooooppppeeeerrrr on the Showtime Lakers)

Note: The Foreword to this book by Spike Lee… is perhaps the “weakest” forward to a book I’ve ever read. Spike comes across like a sixty-one-year old man… trying to act like he’s a cool young hipster. Luckily… he doesn’t waste too much space in the book… since the forward is about ¾ of a page long… and even in such limited space… Spike uses the word “Da”… six times!
Meer lezen
13 mensen vonden dit nuttig
Vertaal recensie in het Nederlands

Alise
5,0 van 5 sterren Ray is my favorite player
27 april 2019 - Gepubliceerd op Amazon.com
Geverifieerde aankoop
I enjoyed this page turner. Ray, already being my favorite, made me look forward to reading about his life. As a die hard Celtics fan, it hurt when he left, but after hearing the rumors, and now from his mouth, I understood. Never enjoyed watching him in a Heat uniform, but watching him play the game he loved, made it worth it. This book gave some advice, not that it was written for that purpose, but enjoyed reading. Thanks Ray
Meer lezen
Een iemand vond dit nuttig
Vertaal recensie in het Nederlands

Andriy Laba
5,0 van 5 sterren Simply truth from one of the best to play the game
13 mei 2018 - Gepubliceerd op Amazon.com
Geverifieerde aankoop
I think some times you need to pick up peace of literature that seems simple at first glance but you need to remember in order to create something simple and inspiring you need to work much harder.

If you want to learn what makes people greats at sports they play or life they live, seek some life advice or at the tough spot and need some inspiration this book is worth your time!
Meer lezen
Een iemand vond dit nuttig
Vertaal recensie in het Nederlands