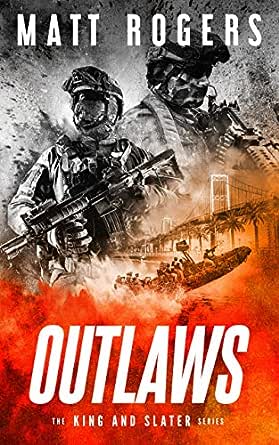 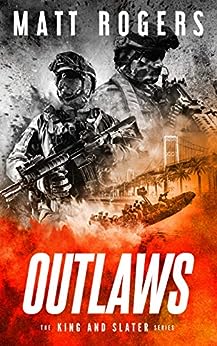 WOULD YOU BECOME AN OUTLAW TO MAINTAIN YOUR MORAL CODE?

Black operations killer Will Slater has a choice to make. Continue putting his life on the line for his country despite the unrest brewing below his stoic exterior … or get out.

Muster the courage to tell his employers how he feels, accept that he’s rapidly approaching his physical and mental limits, ask permission to step away from his role as a human wrecking ball...

But he knows they won’t let him out, not with the state secrets swimming around in his head. There's exceptions the upper echelon simply cannot allow. Slater's been a vigilante once. He knows the pain of isolation, the stress that comes from making an enemy of the shadow world.

And that’s avoiding the real dilemma — if he goes, Jason King must choose between the woman he loves and his brother-in-arms.

What readers are saying about King & Slater:

★★★★★ - “Slater and King working together is a whole new adventure. Twice as much death and destruction. Twice as much adventure and excitement.”
★★★★★ - “Separately, forces to be reckoned with: together, virtually unstoppable.”
★★★★★ - "Two of the best warriors I've met in a long while. Can't wait to see who they tackle next time."
★★★★★ - "It was absolutely fantastic. Loved every minute and I had a hard time putting it down. The action never stops."
★★★★★ - “This book was a treat from start to finish. I continue to be amazed by Matt's ability to come up with truly creative situations for our beloved King and Slater to be thrown into."
★★★★★ - "I think you'll understand what makes them tick. The deepest part of their hearts are exposed.”
★★★★★ - "Jason and Will together. What could be better? Powerful, tense, emotional and fast-paced."
★★★★★ - "Two minds that are so coordinated makes for excitement whatever they do. Matt’s really hit one out of the park with this book."
★★★★★ - "The ensuing combat takes on more importance as family, treachery, and the sheer volume of corruption are factored in."
click to open popover

John K. Lenon
5,0 van 5 sterren SOOO Great
11 december 2019 - Gepubliceerd op Amazon.com
Geverifieerde aankoop
Listen folks, I read alot of books. Alot. I've read all of this author's books. I've read every book of Jason Bourne, Mack Bolan, Sam Durell, Joe Pike, Jack Reacher, John Rain, Jonathon Quinn, Jet, Harry Bosch, John Milton, John Corey, Levon Cade, Conan the Barbarian, John Carter Warlord of Mars, Edge, Steele, The Sackets, Dusty Fog, Nick Heller, Mitch Rapp, The Grey Man, Kirk McGarvey, Bob Lee Swagger, Earl Swagger, Lizbeth Salander, Sam Dryden, Travis McGee, Rambo, Zeb Carter, Peter Ash, The Scarecrow, Lucas Davenport, Gabriel Allon, just to name a few. These are some of the heroes that we love. Westerns, Sci Fi, Action novels, mysteries, Detectives, whatever kind of fiction. Jason King and Will Slater are action bad asses with a heart and are on par with all of the folks I listed above. Bottom line: Great characters and action, well written, no annoying grammatical or spelling errors. Both have their own books or series and then the author combined them into a team series. Members of the Black Force. The ONLY two members. Got a problem? They will solve it. For themselves or the government, or both. Read this dude. He rocks.
Meer lezen
2 mensen vonden dit nuttig
Vertaal recensie in het Nederlands

Sami
5,0 van 5 sterren Outlaws
2 januari 2020 - Gepubliceerd op Amazon.com
Geverifieerde aankoop
I can't express enough how much I enjoy Mr Rogers' style of total suspense. I have read many of his books and I am amazed how whether it is a King of Slater study individually at them together, I can't put the books down after I start them. Every story is different in the suspense and I find myself clenching my teeth as I get so into the story of that book. He weaves the books together with the characters but each book has its own sit on the edge of your seat if his characters come out alive at the end. For those of us who like suspense novels Matt Rogers writing can't be done better!
Meer lezen
Vertaal recensie in het Nederlands

Fripster
5,0 van 5 sterren NO LET UP IN THIS GREAT SERIES
20 december 2019 - Gepubliceerd op Amazon.com
Geverifieerde aankoop
I liked this book so much that I did not want it to be over so I stopped reading near the end and went on to Thomas Perrys new book . I will then go back and finish this one. Slater and King are probably the best team of special ops assassins in this genre and this is only made possible by Rogers superb writing. Okay I went back to finish and you may need a change in underwear while you read the last one their of this book, it is that exciting.
Meer lezen
Vertaal recensie in het Nederlands

Andrew C
5,0 van 5 sterren Started off slow and then...
10 januari 2020 - Gepubliceerd op Amazon.com
Geverifieerde aankoop
Another great entry in the King and Slater series....full of twists and turns and a lot of action! It started a little slow with the indecisiveness of Sister's situation but once that was resolved things took off. The characters had awesome chemistry. Rogers is good at the depth of the main characters so to see how this player was pretty awesome. I can't wait to see what's next for King and Slater!
Meer lezen
Vertaal recensie in het Nederlands

Kindle Customer
5,0 van 5 sterren Outlaws
17 december 2019 - Gepubliceerd op Amazon.com
Geverifieerde aankoop
Thank you Matt, for another amazing book. Will and Jason, appeared to be heading down a dark path, with horrible consequences. Then a favor changed everything. It's great to see that they have a real future, doing what they do best and serving the greater good. I'm glad everything worked out for the best, and I am looking forward to the next book in the series. Keep up the great work.
Meer lezen
Vertaal recensie in het Nederlands
Ga naar Amazon.com om alle 60 recensies te bekijken 4,9 van 5 sterren
Terug naar boven
Over ons
Verkoop bij ons
We helpen je graag
© 1996-2020, Amazon.com, Inc. en dochterondernemingen