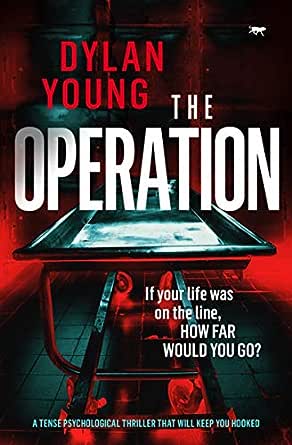 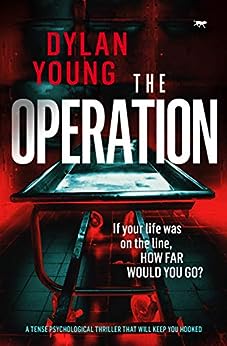 The Operation: a tense psychological thriller that will keep you hooked (English Edition) Kindle-editie

If your life was on the line, how far would you go?

Surgeon Jacob Thorn isn’t worried when the police interview him over nurse Katy Leith’s disappearance. She is a co-worker, nothing more. But when a leaked video of him and the missing woman arguing goes viral, the social media reaction is vicious.

When harrowing images of the kidnapped woman start to appear on his phone, along with a demand from her abductor that Jake confesses to a crime he has no recollection of committing, he is forced to act or face terrifying consequences.

He needs to delve into the past for answers. But time is running out for Katy.

Will he admit to his failings and lose everything, or plead ignorance and let an innocent girl die?

Dylan Young is the author of the acclaimed psychological thriller, The Appointment. The Operation is a tense and utterly compelling psychological thriller which will have you gripped from page one. If you are a fan of authors like Mark Edwards, John Marrs and Lisa Stone, you'll love this heart-pounding thriller.

Joanna J
4,0 van 5 sterren A clever and well-written stand-alone medical thriller from the author of the Anna Gwynne series
9 januari 2020 - Gepubliceerd op Amazon.com
The Operation is a clever well-written medical thriller about the impact that social media hysteria can have on a surgeon unjustly accused of a terrible crime. I had read all three of this author’s brilliant DI Anna Gwynne series in the last year or so, and confess to slight disappointment that this was another stand alone, rather than a return to the adventures of capable Anna and fascinating Hector Shaw, but ended up really enjoying this. I bought The Appointment, having bought it after missing out on an ARC, so need to bump it up the TBR.

Jacob Thorn is a successful general surgeon at an Oxford hospital with a burgeoning private practice, a gorgeous if controlling girlfriend, Sarah, and hopes of moving into a desirable new home. His only problem in life is that Sarah won’t let him get a dog, so instead he walks Sid, a boisterous rescue Labrador-Rottweiler cross for a local shelter.
When Katy, a beautiful young nursing colleague, disappears after a leaving-do at a pub, his life is turned upside down by the release of a video showing him arguing with her days before, the police question him and the press immediately start pointing the finger at him, leading to nationwide online vilification and even public harassment. Then messages arrive threatening that Katy will be killed using a knife with his prints if he does not confess to the murder of a patient years earlier - one he remembers nothing about. Facing condemnation from colleagues and strangers alike, how will he save his freedom and his career?

When I started this and discovered it was written in First Person Present, which I despise (I know plenty of people like it but I find it completely distracting and annoying.) I wanted to abandon it, but I had committed to reviewing it before publication for the Bloodhound ARC group, and seen plenty of positive comments from other readers, so decided to grit my teeth and push on. Fortunately not all of it is Jake’s POV, there are chapters showing the police investigation written in standard third person past. There are extensive sections of Jake’s internal monologue about everything, from hospital politics to current TV programmes, for which the present tense felt appropriate. There was also way too much detail about everything that Jake eats and drinks. Some details of his life flesh out a character but too much felt like padding. It did mean that the plot takes a while to get moving - it’s 30% in before anything which could be considered thrilling happens, but from then on I was appropriately gripped trying to work out what was going on.

I had not realised from reading the author’s other books that he is actually a medical doctor, but that became abundantly clear quite early on here, as he accurately describes everyday scenes of hospital life, from the operating theatre to the dreaded HR meetings, with all the associated stresses facing doctors that the public know nothing about. The interspersed twitter quotes were a painful reminder of how much some people hate us - until of course they need us! It’s a long time since I’ve worked in a hospital or for the NHS, but a really good reminder of why I never went back. It’s not that trolls are any less vicious here in NZ (and props to the author for the various New Zealand references in the book!) but the system here is not so demoralising and underfunded as in the UK.

I thought there were perhaps a few too many clues, so I guessed who was behind part of Jake’s troubles fairly early on, but totally didn’t predict the rest of it, and liked the way it all panned out, especially the ending which was perfect. I’m always worried in books which feature an animal that something terrible will happen to them which can make reading rather stressful, so I’m happy to reassure fellow animal lovers that nothing bad happens to Sid.
I thought the dialogue was very well done, I particularly enjoyed the banter between Jake and his anaesthetist colleague was pretty funny. Oh and the cover image is great - unusual but completely appropriate. Overall I can thoroughly recommend this and look forward to whatever Young comes up with next (but I still hope Hector’s in it!) 4.5 rounded down for the use of the present which turned out to be completely unnecessary.

My thanks to Heather Fitt at Bloodhound for the ARC in exchange for an honest review.

Heidi Lynn
5,0 van 5 sterren Best Medical Suspense Read of 2020
16 januari 2020 - Gepubliceerd op Amazon.com
First, I want to thank Dylan Young and BOTBSPublicity for providing me with this book so I can bring you this review.

If you are a fan of Medical Suspense books like I am-you-must-pick-up Dylan Young’s The Operation. Immediately, I knew when I read the title and saw the cover, I knew this book was a must read! For someone like me who is passionate about medical field, good patient care, and medical suspense genre this was one of the top reads for 2020! Dylan just got a new fan!!

Being a former Medical Office Assistant there was a part of the book that I found relatable. Dylan brought up some very important dialogue between two staff members in the hospital regarding administrative roles and gender roles. There were very interesting facts that were stated that were if you think about it sad in a way. His dialogue between these two were passionate because of the issues yet genuine at the same time. This was one of the best sections of the book. I feel that he was talking to us through the characters.

I especially found all the medical cases and surgeries in this book very fascinating. Dylan did an incredible job describing the patient, what their diagnosis was, and what their treatment or surgery was going to be.

There were many stories within the stories of nurse Katy’s abduction which was a very interesting story as well. I loved how he brought social media like Twitter and Facebook into it. There was an interesting section of what the Doctor really thought about Facebook. I chuckled at that!
Meer lezen
Een iemand vond dit nuttig
Vertaal recensie in het Nederlands

booklover
4,0 van 5 sterren Confession - Good For The Soul
13 januari 2020 - Gepubliceerd op Amazon.com
Many thanks to the Author / Bloodhound Books for the digital copy of this psychological thriller. Read and reviewed voluntarily, opinions expressed here are unbiased and entirely my own.

General Surgeon Jacob Thorn is the prime suspect in nurse Katy Leith's disappearance, possible abduction. Although he knew her from working at the hospital, it's not until a video shows up showing him and Katy arguing. The police are taking a much closer look at Thorn's life.

And when terrible pictures of Katy start showing up on his phone, the kidnapper also sends a note ... that disappears in seconds. The message ... confess to a crime he doesn't remember committing.

If he doesn't publicly confess, Katy will die.

This is a well written psychological thriller that keeps the reader glued to the riveting story of a man who is being blackmailed for a crime he doesn't remember doing ... a crime that will cost him his job, his reputation ...or the life of a young woman. The use of twitter postings pulls this story right into the here and now. Amazing how social media can condemn a person without any proof. The characters are finely drawn and Thorn volunteering at a shelter for dogs made him much more likeable and human. The ending came as an astonishing surprise.
Meer lezen
Een iemand vond dit nuttig
Vertaal recensie in het Nederlands
Ga naar Amazon.com om alle 12 recensies te bekijken 4,2 van 5 sterren
Terug naar boven
Over ons
Verkoop bij ons
We helpen je graag
© 1996-2020, Amazon.com, Inc. en dochterondernemingen