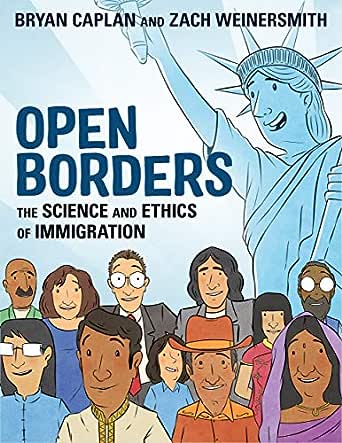 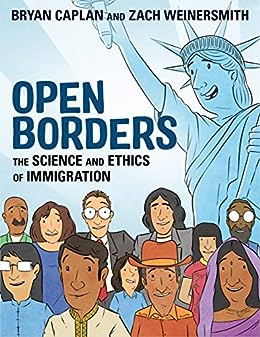 An Economist “Our Books of the Year” Selection

American policy-makers have long been locked in a heated battle over whether, how many, and what kind of immigrants to allow to live and work in the country. Those in favor of welcoming more immigrants often cite humanitarian reasons, while those in favor of more restrictive laws argue the need to protect native citizens.

But economist Bryan Caplan adds a new, compelling perspective to the immigration debate: He argues that opening all borders could eliminate absolute poverty worldwide and usher in a booming worldwide economy—greatly benefiting humanity.

With a clear and conversational tone, exhaustive research, and vibrant illustrations by Zach Weinersmith, Open Borders makes the case for unrestricted immigration easy to follow and hard to deny.

Louis
2,0 van 5 sterren Preaching to the choir, with added cartoons, if you like that sort of thing
30 oktober 2019 - Gepubliceerd op Amazon.com
Geverifieerde aankoop
I pre-ordered this book back in April. I've been a fan of SMBC comics for years. It arrived at a great time -- My Great Decisions group just had a discussions on Mexico and Immigration

I was expecting a more balanced discussion, but this is pretty much the same tired arguments. It doesn't address the subject to the depth I had hoped, and I didn't read any major point in here that I haven't already heard before. Nor did it really do justice to the counter-arguments. Bryan just sets up a bunch of straw men and knocks them down.

That is disappointing in a book of this length, which should have the room to dive deeper into this complex subject and present a little more of both sides. As an example, it didn't really address issues in Europe or the recent history of US legislation on immigration in any detail. Nor much of the history, which is inexcusable since human migration has existed for as long as, well, humans, and there is a rich set of precedents to analyze and learn from.

The book would have benefited from a healthy dose of Zach Weinersmith's irreverent cynicism. Without the snark, the graphics just look like a 200+ page Jack Chick tract. The same style that make SMBC so great just produces vaguely creepy brainwashed members of a religious cult in this book. Just check out the cover if you don't believe me. Ol' liberty herself vacantly stares off into the distance with a big goofy smile on her face.

And if you think the Jack Chick comparison is a low blow, there is a section where not only does the author ask the question "Who would Jesus deport?", he goes on to have a hypothetical discussion with Cartoon Jesus, who delivers a pro-open-borders sermon. A wide-eyed talking lamb sitting on Cartoon Jesus's lap punctuates the sermon by declaring "Denying foreigners the right to live and work where they like just isn't Christian!" Admittedly, perhaps the low point of the book, but I fear the rest is in much the same earnest, straining manner.

So why two stars instead of one? Because I think that this book is disappointing, it may be the start of a healthy debate on immigration, as Bryan and Zach are scheduling talks on this.

So if you want to thank Zach for all those great comics, buy this book. Or to prepare for attending one of the talks, which I think will be better than the book.

Update: One more thought - For any future author lucky enough to work with Zach on a project, make him your co-author rather than just your artist. Let him call the shots and run with the ball for a bit. The mind who gave us SMBC, BAHfest, and the single-use unlubricated monocle possesses a gift of insight, imagination, and irreverent wit that will contribute immensely to your creative process..

Alex
1,0 van 5 sterren The Magic Dirt Theory (Now Illustrated)
6 november 2019 - Gepubliceerd op Amazon.com
Geverifieerde aankoop
A surprisingly shallow treatise compared to Caplan's last book, especially considering that this topic is his bread and butter. It has to be said that right out of the gate, the cover has all of the hallmarks of a saccharine teenage libertarian fantasy, wherein every imagined immigrant is stylized to look just like Caplan.

Where to begin? The most immediate issue with this book is that its rationalization for open borders relies on a type of straw man argument that involves Caplan being very selective with his empirical rigor. He covers the territory of the debate broadly but, in many cases, quite superficially.

His social arguments fall squarely into the superficial category. One can find this in the section comparing crime rates of natives to immigrants. Caplan uses incarceration data as a means of assuaging fears that with immigration comes an increase in crime. He attempts to show that there is no concerning difference between the in-group and the out-group, so to speak. (As an aside, it should be mentioned that much of this data comes via Alex Nowrasteh and the Cato Institute which is funded and founded by the Koch brothers).

Simply put, by their very own numbers, we find that an increase in Hispanic immigration would significantly increase crime. Considering that the vast majority of immigration would be coming from Latin America, you would think this angle of analysis would be an entry-level requirement for an open borders argument.

Caplan’s strength is in economics, but the growth model underpinning his proposed "doubling of world GDP" is already under fire from other economists (see: Garret Jones). The issue being that the economic mechanisms for his claim are vague and rely on intangible, unquantifiable, and unexplained 'qualities' unique to American soil. In other words, more magic dirt theory. Many of his other economic assumptions rest on the notion that western institutions are so robust so as to absorb an incredibly sharp influx of immigrants successfully. Yet the 2015 refugee crisis, which resulted in distinct harm to institutions and created major political shockwaves across Europe, betrays this belief. The broader thesis that he and other anarcho-capitalists rely on is that mass immigration will kill the welfare state. Good luck with that plan when the overwhelming majority of immigrants support expanding government programs.

Mech Mech
5,0 van 5 sterren A fun and informative introduction for newcomers to this policy idea
30 oktober 2019 - Gepubliceerd op Amazon.com
Geverifieerde aankoop
This was a very enjoyable graphic novel. I was expecting (dreading?) dry text broken up with a few doodles, and instead got an graphic novel with a really high text-to-information ratio: every piece of text feels both essential and well-placed. No fat to trim here!

Having no well-formed prior opinion on the idea of open borders (though generally supportive of more immigration), I wasn't expecting this level and depth of arguments and data. While I'll want to read level-headed responses to this text, it has made a really strong impression on me. It was as accessible as it was persuasive.

Lastly, I should mention that it's a brief read (unless you dive into the robust Notes and Bibliography sections). With that in mind, I think this is a great book to pass around and discuss, but you shouldn't expect it to last you longer than an evening.
Meer lezen
35 mensen vonden dit nuttig
Vertaal recensie in het Nederlands

Amazon Customer
5,0 van 5 sterren They had me at "contents"
29 oktober 2019 - Gepubliceerd op Amazon.com
Geverifieerde aankoop
Be careful - after you read this clear, concise, funny and fact-filled graphic novel you will be out on the streets demanding Open Borders and a taco truck on every corner! Well, maybe not, but I'm starting to think all policy-focused books should be written this way. Are you listening, Thomas Piketty?