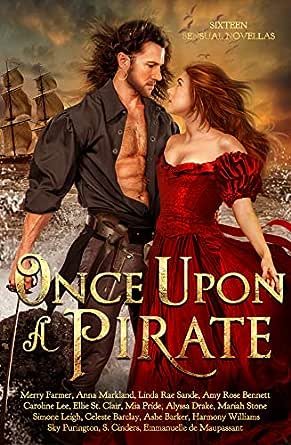 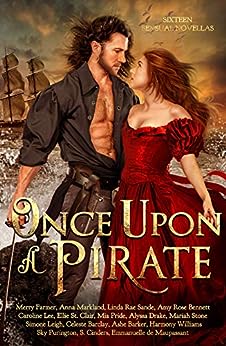 Set sail to the lush heat of the Tropics, the storm-tossed Northern realms, the wild Barbary Coast, and the hazardous waters of the South Seas.

Defying danger in pursuit of all-consuming love.
Matching wits to claim the greatest treasure of all.

As perilous battles, treachery and revenge give way to sinful kisses, no heart is safe.

THE CAPTIVE VIXEN
by Merry Farmer

THE LADY AND THE PRIVATEER
by Amy Rose Bennett

THE STORMSWEPT STOWAWAY
by Ellie St.Clair

THE BRUCE’S ANGEL
by Caroline Lee

THE PLEASURE OF A PIRATE
by Linda Rae Sande

THE LADY’S GUIDE TO ESCAPING CANNIBALS
by Emmanuelle de Maupassant

THE DARK HEART OF THE SEA
by Celeste Barclay

JILTED AND KILTED
by Mia Pride

RESCUED BY PASSION
by Sky Purington

AN IMPERFECT SCOUNDREL
by Alyssa Drake

THE SPINSTER’S GUIDE TO PIRACY AND PLUNDER
by Harmony Williams

Due to some family mishaps, Calliope has been blamed for a family curse. So she’s foisted off to join her Uncle Theo on a far away quest for dodo bones. When the ship that they’re on is forced off course to avoid a pirate ship and gets stuck on a reef... enters dashing privateer, Captain Townsend to the rescue.

Off the bat Calliope and Jonathon fight their attraction for each other, which becomes impossible since fate is destined to throw them in each other’s paths. I was a little worried because the first few chapters these two were hardly on the same page... Jonathon had his own quest for that he was chasing, so that kept him away from Calliope. But when they are in the same scene, get ready for the tingles coz theses two will give you all the feels.

I really enjoyed this story... especially since there’s a very inappropriate parrot named Nelson acting as the comic relief. I love animals in books.

This is surprisingly a little tame for an Amy Rose Bennett story... but she does keep the sexual tension between Calliope and Jonathon on a tight leash (I did like the mud scene). Makes up for it at the end tho. All in all a totally fantastic read.

Bathsheba wants a change in her life and decides to follow in her father’s and brother’s footsteps... doing ritual and custom studies of primitive tribes. Things takes a turn when her brother goes missing. Searching for her brother will take Bathsheba on an adventure filled with high sea voyage, close quarters with a dashing, but broody, Captain... and a mad run from a live volcano and a village full of cannibals.

Jorge is a 3rd generation sea man... his ship is his life. However, maintaining that lifestyle and taking care of his crew requires money. So when Bathsheba offers to pay him for the assistance in locating her brother, he jumps at the chance... even though he has a secret that will devastate her.

Together they make a fine pair. Their first meeting had me laughing so hard. I did enjoy their (mis)adventures very much. This story reminded me of quest movies that I used to watch as a child.... King Solomon’s Mine.... Romancing the Stones... Goonies.

Emmanuelle de Maupassant writes very descriptive stories. Sometimes I forget that it’s a novella I’m reading. My only wish is that Jorge and Bathsheba had a little more “get to know” time before they got to the island. They spent at least 17 days on the ship, and it would have been nice to have a few more sharing moments between these two.

Ruairi and Senga’s were such strong characters that truly complimented each other. I love how Ruairi was so protective over Senga. Always rushing to save her... totally a yummilicious hero. And Senga was such a freaken little warrior, absolutely not a simpering miss. Even though they had sex upon first meeting, their romance was a wonderfully slow burn. I didn’t feel like it was rushed at all. These two had great conversations, talked about each other’s past, and just really got to know who they were individually. Loved these two... and they were really hot together too.

My star system:
4 stars: Book was great... loved the characters... will definitely be re-reading this story... but didn’t make me cry.

Monique D
5,0 van 5 sterren Mateys, this looks like a great one!
27 december 2019 - Gepubliceerd op Amazon.com
Geverifieerde aankoop
I have read only one story so far, but if it's any indication, ONCE UPON A PIRATE will be a smashing box set! And what about that gorgeous cover!

THE PLEASURE OF A PIRATE by Linda Rae Sande

Blake Russell was attending a masked ball, and only one young lady caught his eye: Little Bo Peep, the voluptuous Miss Barbara Wycliff. He is contemplating courting her eventually, but before he knew it, "the lust of his life" had vanished! She has been kidnapped by Lord Dorchester! With not a moment to lose, he goes after her!

THE PLEASURE OF A PIRATE is a wildly entertaining Regency pirate romp, and what a glorious movie it would make; think of the swashbuckling of Erroll Flynn pictures with a dash of Gene Wilder's humour! We also get the full details of how Blake ended up Captain of the Molly and the ship's colourful crew. And wow, this didn't go as I expected! I loved that while Barbara is ingenious, she thinks and acts like a pampered young lady; it was quite amusing and more believable than the usual historical fare. Besides, neither Blake or Barbara are physically perfect, but they are so very appealing and the air around them crackles with sexual tension.

This is a rather long novella, and Linda Rae Sande knows her pirates. There are many surprising twists and turns; what happens is never quite what you anticipate; isn't it just wonderful! The characters are well fleshed out, charismatic, and the dialogues very witty and clever. THE PLEASURE OF A PIRATE had me smiling the whole time and giggling quite often. If you're looking for a fun romantic read with a bit of oral naughtiness and a hint of steam, you will enjoy this story as much as I did.
Meer lezen
5 mensen vonden dit nuttig
Vertaal recensie in het Nederlands

Élodie Nicoli
5,0 van 5 sterren An awesome bundle of fun and entertaining adventures
27 december 2019 - Gepubliceerd op Amazon.com
Geverifieerde aankoop
Here is my review for the three arcs I was granted, I will update it when I read the others.

THE LADY AND THE PRIVATEER
Amy Rose Bennett

Hapless spinster, Lady Calliope Banks, is on a hunting expedition for dodo bones on the Isle of Mauritius. Roguish privateer, Captain Jonathon Townsend, is on the hunt for a notorious pirate. Even though they’ve both charted entirely different courses in life, it seems Fate might have other ideas… Thrown together unexpectedly, neither Lady Calliope nor Captain Townsend can resist the irresistible pull of a growing magnetic attraction. But can this unlikely pair find love?

When a lady is rescued by a privateer, these two stubborn personalities must do with their circumstances ...

If one thing is sure, the story put me straight to the point with humor, with lady Calamity contemplons her fate and maybe early demise until her sinking ship is rescued.
It is a fast and sweet read with two heroes who are instantly drawn to the other but their past and present situation provide them to act on it, until they must face the evidences of their attraction.
Yet a spoiled parrot with a flourish language, some dodo bones and cunning fellows will help them see what is right in front of them.
4 stars

THE DARK HEART OF THE SEA
Celeste Barclay

What happens when a ruthless pirate meets the woman who warms his dark heart? Rauirí MacNeill is one of the most feared pirates sailing the British Isles, but when he rescues a woman from attack, can he resist when she matches wits without fear? Senga MacLeod Sorley did not expect a chance encounter to lead to a kiss and an adventure on the high seas.

When a young woman rescued twice by a Pirate must choose which road to follow from now on ...

This was my first read by Mrs Celeste Barclay, and what a read. If you love epic tale, you are in with this one. Nothing felt rushed nor lacking despite the shortness of this novella.
I loved both main characters, they have a past and instead of using it as a shield to avoid entanglement, it brings them together.
Both suffered tragedy and betrayal, yet they survived and became stronger.
When Ruairí fought to take in destiny in hand, Senga has a woman has not the same options, but in her way, she battled to keep her independence.
I loved she is no shrinking violet, she is quite a awesomely strong heroine, playing on equal terms in men world.
Ruairí made his mission from the beginning to protect her, still she stands her ground and is able to return blow for blow. But she is no hardheaded woman, she listens and understands when she must follow orders.
A must read sensual story about two peoples who have found their own solace in the arms of the other.
5 stars

Under the protection of darkly handsome Captain Jorge de Silva, Lady Bathsheba Asquith lands on the mysterious island of Vanuaka with only three days to find her missing brother. The trials of the jungle strip away any pretense of propriety and passion flares, but de Silva is not all he seems, and Bathsheba is in more danger than she can imagine. Vanuaka’s volcano is awakening—and only a human sacrifice can appease its fire.

When a lady hires a captain and his crew, can secrets and deceit be overcome when their life’s are at stake ...

Lady Bathsheba has followed the rules all her life, living the “perfect life” of a society’s miss and peer’s wife, her only glimpse of adventure through the letters sent by her explorer of a brother.
Yet now widowed for many years, she wants more from her life than ball gowns and parties.
So for once, she follows her heart instead of reason and here she is awaiting her brother’s return in a far away place.
Jorge is following his grandfather and father steps, captaining his inherited ship and also providing protection for his mother’s people.
His mixed origins make him the perfect man for Bathsheba’s mission but he would be out of his depth in her world.
Bathsheba is a kind and loving woman who is longing for more from life, she is true and caring, and despite her naivety and inexperience, she jumps willingly in her first adventure.
When Jorge is a bit more jaded by his past challenges and when he sees her first as a mean to an end, he is also drawn to her.
How can they reach the other when secrets lurk in the shadows awaiting to tear them apart.
A 5 stars tale of finding its inner strength and fighting for what we want.

I was granted an advance copy by the authors, and will purchase this book once released as I have other authors I hope to read about.
Here is my true and unbiased opinion.
Meer lezen
4 mensen vonden dit nuttig
Vertaal recensie in het Nederlands
Ga naar Amazon.com om alle 121 recensies te bekijken 4,6 van 5 sterren
Terug naar boven
Over ons
Verkoop bij ons
We helpen je graag
© 1996-2020, Amazon.com, Inc. en dochterondernemingen