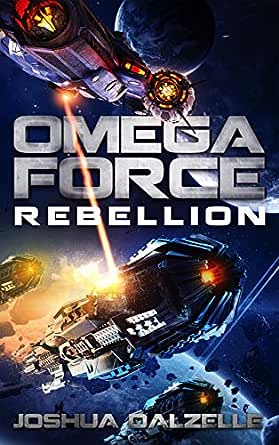 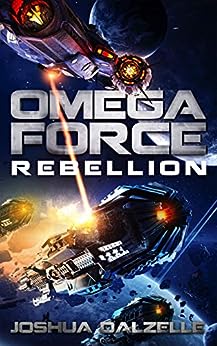 The quadrant is on the brink of all-out civil war, but almost nobody knows it.

Now that he knows a malevolent AI that calls itself the Machine has seized much of the ConFed's military apparatus and even controls the Grand Adjudicators themselves, Jason Burke must decide if he risks picking a fight with such an overmatched enemy, or if he runs to hide and fight another day.

Omega Force needs allies, and needs them quickly. After the unprovoked invasion of a neighboring superpower by the ConFed, Jason finds out that most of their military hadn't been destroyed but instead remains hidden while the ConFed continues to hunt them down. If he can find the missing fleets and convince them to join his fight, he just might be able to hit back at the Machine before it invades another sovereign nation.

"Rebellion" is the eleventh book in Joshua Dalzelle's #1 bestselling Omega Force Series and continues the story of Jason Burke and his crew of mercenaries and criminals.

FoxyFam5
5,0 van 5 sterren Superb. Omega Force is at it again!!
26 september 2019 - Gepubliceerd op Amazon.com
Geverifieerde aankoop
Omega Force has long been one of my all-time favorite series. It has it all, action, humor, intrigue.
Please keep in mind Omega Force IS a series and this is book 11. You will not be able to pick up this book as a standalone. Please start at the beginning. May also want to consider Marine, an Omega Force spin off. The events in that book seem to take place around the first to the middle of Rebellion, book 11.

Rebellion picks up right after book 10. Jason and crew are now fighting a rebellion that spans the quadrant. Earth is just starting to make mark, but it's not quite there yet. I actually anticipate many good things coming out of Earth that will support Jason in future books. Alliances are forming. They will need all the help they can get as they face an ancient enemy that has already proven how diabolically evil it is. Omega Force didn't finish it off the first time they met this evil and now it will be harder than ever to defeat.

I always wait with anxious patience until the next book comes out. I was so excited to get an email this book was out!! I eagerly await the next installment!!

Amazon Customer
3,0 van 5 sterren OK, but only OK
9 oktober 2019 - Gepubliceerd op Amazon.com
Geverifieerde aankoop
Sometimes the best series are books you simply stumble across, and the Omega Force series is one of those. I've read every book in the series, twice. But I was a little disappointed with this one because it opened a lot of story threads and left them open. Most of the books have been complete novels, but this is really the first one that's really just a bridge, an episode in a serial.
(Spoiler alert)
Will Doc be able to "fix" Jason and his connection to Cas?
Who / what is "The Machine" really afraid of that pushes him to go for absolute power?
Will Lucky figure himself out, and why did he kill all those Eshuquarians?
Where is Jason's son? (and is Marine 2 coming soon?)
Will Killea and Jason ever either get back together, or, at least, make peace?
What is going on with that distant empire?

Lazerbeam
5,0 van 5 sterren One of the best in the OF series yet!
25 september 2019 - Gepubliceerd op Amazon.com
Geverifieerde aankoop
I had read all of the OF books in the series and it took so long for this one to be released that I thought the author had given up the series. In retrospect, it was worth the wait. This one has good action, character interplay and a good story line. The author has also laid out a good foundation for continuing the series. I just hope he doesn't take so long between releases. Then again, a good story does take time to write and edit properly. Can't wait for Pandora's Paradox release.
Meer lezen
Een iemand vond dit nuttig
Vertaal recensie in het Nederlands

EricAZ
4,0 van 5 sterren Good read but falls short of previous
2 oktober 2019 - Gepubliceerd op Amazon.com
Geverifieerde aankoop
3 1/2 Stars. I've really enjoyed the series and will certainly look for the next one, but this book feels like it was banged out in a hurry and seemed to lack the sense of the author's delight and energy in both crew and ship that has suffused the previous titles. It almost feels like he had to get a book out but wasn't ready to fully develop all the ideas and plot lines that he wants to explore going forward. One other thing: the book is full of editing mistakes and weird word substitutions ("peddle" instead of "pedal"; "subliminal" drive instead of "subluminal" drive) that were not just one-off but repeated. Was this dictated speech-to-text? A good read, but a little short of the expectations Mr. Dalzelle has set by the other books.
Meer lezen
Vertaal recensie in het Nederlands

Peter Griffith
5,0 van 5 sterren Dalzelle does not disappoint
20 september 2019 - Gepubliceerd op Amazon.com
Geverifieerde aankoop
Omega Force is amazing fiction, not because of the amazing battles, or the cool tech. No, it's amazing because the character development and story building is incredibly good. Without even knowing how, once you start this series you'll come up for a breather and be 60% into a book. They are literally impossible to put down. I'm just sad that I read so fast that I'll have to wait so long for another book.
Meer lezen
2 mensen vonden dit nuttig
Vertaal recensie in het Nederlands
Ga naar Amazon.com om alle 159 recensies te bekijken 4,8 van 5 sterren
Terug naar boven
Over ons
Verkoop bij ons
We helpen je graag
© 1996-2020, Amazon.com, Inc. en dochterondernemingen