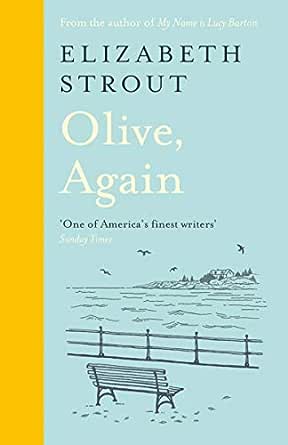 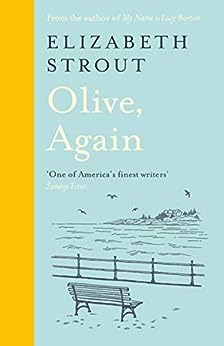 An extraordinary new novel by the Pulitzer Prize-winning, Number One New York Times bestselling author of Olive Kitteridge and My Name is Lucy Barton

Olive, Again follows the blunt, contradictory yet deeply loveable Olive Kitteridge as she grows older, navigating the second half of her life as she comes to terms with the changes - sometimes welcome, sometimes not - in her own existence and in those around her.

Olive adjusts to her new life with her second husband, challenges her estranged son and his family to accept him, experiences loss and loneliness, witnesses the triumphs and heartbreaks of her friends and neighbours in the small coastal town of Crosby, Maine - and, finally, opens herself to new lessons about life.

'A powerful storyteller immersed in the nuances of human relationships' Observer

'She gets better with each book' Maggie O'Farrell

Mary Lins
5,0 van 5 sterren Enjoy Olive Again!
22 juni 2019 - Gepubliceerd op Amazon.com
Vine-klantenrecensie van gratis product( Wat is dit? )
First of all, you do not have to have read Pulitzer winning, “Olive Kitterage”, or seen the Emmy winning HBO series starring Frances McDormand, to thoroughly enjoy Elizabeth Strout’s follow up, “Olive, Again”, though I predict that you will want to.

The success of the book and HBO series rests on Strout’s perfectly imperfect character, Olive. She is entirely unique and readers have a variety of reactions to her, mostly contradictory because she is. She is hard-nosed somewhat stereo-typically a cold north easterner, judgmental and blunt. She is also compassionate, sarcastically witty, and loyal. I’ve always thought that it would be difficult to be friends with Olive, but worth it.

“Olive, Again”, like its predecessor (and like the two “Lucy Barton” novels Strout has penned in the interim), is a collection of inter-related stories about the denizens of Crosby, Maine, particularly in relation to Olive Kitterage. We meet some familiar characters, but also a few new ones. There is a disturbing story of a young girl who cleans houses and a strange relationship that follows. I was especially touched by the continuation of a story from the first book that relates a poignant conversation between the sister of a murderer and her parent’s lawyer as she returns to Crosby and her memories of growing up there. Evidence of Olive growing as an individual is in a piece where she visits a former pupil who has cancer. I loved these conversations so much because Olive reveals a lot about her marriages. Plus, it’s quite funny! Happily, one section brings us up to date on the Burgess boys - another of Strout's novels!

I didn’t think of this eleven years ago when I first “met” Olive, but this re-acquaintance has made wonder if Olive is on the “autism spectrum”. Is she ignoring social cues, or is she missing them? Is her bluntness and thoughtless disregard for “niceties” because she doesn’t understand the need for them? Several times she does show empathy and concern for others’ feelings, but these episodes seem to come as a shock to even her. In any case, Strout beautifully “grows” Olive in this wonderful new novel. I knew I needed more Olive and I am thankful that Strout did, too!

It’s a fast read even though I tried to slow down and savor it! Strout is such a wonderful writer, Frances McDormand is such a wonderful actress, let’s hope another HBO series is in the works!
Meer lezen
159 mensen vonden dit nuttig
Vertaal recensie in het Nederlands

Mary K.
1,0 van 5 sterren Not so great, save your money...
23 oktober 2019 - Gepubliceerd op Amazon.com
Geverifieerde aankoop
Loved the first book but wasted my money on this one. Just a lot of drivel that went nowhere. I also didn’t like her digs against Trump. No need to work that into a storyline but it seems to be a trend from authors in Maine...
Meer lezen
130 mensen vonden dit nuttig
Vertaal recensie in het Nederlands

David Keymer
5,0 van 5 sterren SHE CREATES A UNIVERSE OF FEELING AND HUMANITY
21 juni 2019 - Gepubliceerd op Amazon.com
Vine-klantenrecensie van gratis product( Wat is dit? )
In still another absolutely superb collection of fiction, Strout (author of the Pulitzer Prize winning Olive Kittredge, year) demonstrates again that she knows a simple truth. That people are interesting. Not just famous people. People, period. All of us. Any one of us. Our lives aren’t linear, no matter whether they set out for them to be. They don’t go in straight lines. They twist and turn, diverge from the path and loop back, or head off in a wholly new direction where god knows what will happen. And the past comes back to bite us in the present in the way people see us and relate to us and in our regrets and second guessings about past behavior and deeds. Even if we say we don’t need others, we are tied to people around us in multiform ways.

Witness the sleepy little town of Crosby, Maine, where Olive Kittredge, now in her seventies and widowed but for forty years before that a teacher of junior high math –she still encounters past students in the stores, restaurants and streets of Crosby. She meets a man named Jack, a retired Harvard professor, arrogant, even snobbish in his manner. He’d been shoved out of Harvard after he was charged with sexual harassment over an affair with a young colleague in his department. He’s a widower now too, riven with guilt for having cheated on his wife and shame over his public humiliation. In his prime, he was a young god but those days are far behind now: he’s overweight now, has a puffy round stomach that shames him, but then, so do his memories. Somehow, one time only, Olive and he wind up in bed together, not sex, but a relationship. And then she’d left and when he tried to get in touch with her, she didn’t respond.

So to the first story, “Arrested”, in this set of separate but interconnected stories that collectively weave together into a novel about that strange but wonderful old woman, Olive Kittredge. But not just about her. Rather, they’re about her universe, the odd collection of people in and around Crosby who give meaning (and sometimes lack of meaning) to her life, as does she to theirs. It’s a wondrous way to craft a novel, “us/them”-=centered as much as “me.”

The story! Jack’s having a bad day. He called to apologize to his daughter Cassie for the way he’d treated her for years: she’s lesbian and he’d never accepted that. The call didn’t go badly. It just didn’t go well. So he stops at the Regency Hotel bar to hoist a few and when he pulls away from the bar he’s pulled over by the police for driving too fast and having an overdue inspection certificate. He complicates matters by his attitude toward the police but finally he’s allowed to drive off –shamed again. But for what? The present events or his past offenses? His past drives his present. He sends an email to an old beau of his deceased wife to let him know she had died and when the man responds, finds that his wife had been having her own affair while he’d been having his. He has no reason to think that Olive Kittredge would want to get in touch with him again but he decides to try again, this time by letter.

It’s three stories later before Olive’s front and forward in a story, but she pops up in different ways in between. In “Labor,” she goes to a baby shower and ends up delivering a baby in the back seat of her car. (It’s messy.) That leads to a conversation with Jack again and the start of what will be her second great relationship, ending in eight years of marriage with him. She’s peripheral in “Cleaning,” which is about a young, poor woman and her awful life cleaning for stuck up prigs. But she’s there.

“Motherless Child” is one of the pivots of this extraordinary glimpses into people’s inner lives in this on the surface idyllic little Maine town. It’s about a visit: Olive’s son Christopher, his wife, Anne, and their four children, two older and two very young, visiting from New York City where they live conveniently far away from Christopher’s mother. The visit is a disaster and when Olive tells her son that she is going to get married again, to Jack, a Vesuvius of a disaster. Then Anne snaps at her husband, tells him to man up, and Olive has an epiphany: Christopher has married his mother because Olive behaved toward him the same way when he was young. She was not a patient mom. And now her son is locked in the same dynamic with his wife.

I’m not going to go through all the stories in this collection. There are nine more! But all are about the same thing, though in different ways: the past always has hooks in us and we don’t really know what or who we are, we just move along, trying our best but buffeted by our feelings and the pressure of events. The end result is often not pretty or tidy. It just is.

By the end, Olive is eighty-three or eighty-four, which is my age or a year older. Jack’s long dead and her first husband, Henry, looms larger in her memories now. She almost died from a heart attack and can no longer drive after dark. She living in an assisted living facility where her relations with the other residents are, let’s say, not always easy. She’s finally contemplating death. She doesn’t want it but she knows it happens.

There is this marvelous passage one page before the end of this book: "[I]t was almost over, after all, her life. It swelled behind her like a sardine fishing net, all sorts of useless seaweed and broken bits of shells and the tiny, shining fish –all those hundreds of students she had taught, the girls and boys in high school she had passed in the corridor when she was a high school girl herself (many- most—would be dead by now), the billion streaks of emotion she’d had as she looked at sunrises, sunsets, the different hands of waitresses who had placed before her cups of coffee—All of it gone, or about to go."

That is glorious writing. Olive contemplates her life and goes back to writing. This is what she writes: “I do not have a clue who I have been. Truthfully, I do not understand a thing.”