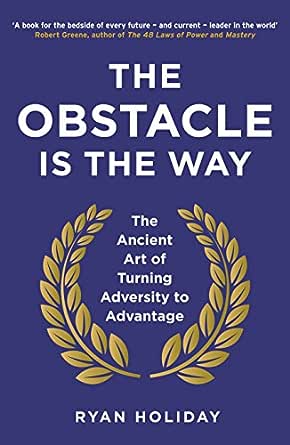 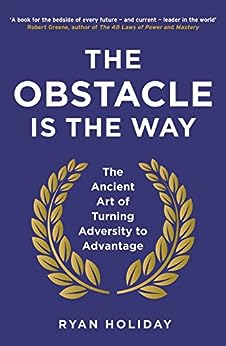 The Obstacle is the Way: The Ancient Art of Turning Adversity to Advantage (English Edition) Kindle-editie

We give up too easily. With a simple change of attitude, what seem like insurmountable obstacles become once-in-a-lifetime opportunities. Ryan Holiday, who dropped out of college at nineteen to serve as an apprentice to bestselling 'modern Machiavelli' Robert Greene and is now a media consultant for billion-dollar brands, draws on the philosophy of the Stoics to guide you in every situation, showing that what blocks our path actually opens one that is new and better.

If the competition threatens you, it's time to be fearless, to display your courage. An impossible deadline becomes a chance to show how dedicated you are. And as Ryan discovered as Director of Marketing for American Apparel, if your brand is generating controversy - it's also potentially generating publicity.

The Stoic philosophy - that what is in the way, is the way - can be applied to any problem: it's a formula invented more than 2,000 years ago, whose effectiveness has been proven in battles and board rooms ever since. From Barack Obama's ability to overcome obstacles in his election races, to the design of the iPhone, the stoic philosophy has helped its users become world-beaters.

Ian Mann
4,0 van 5 sterren Amazing, but never true
10 april 2017 - Gepubliceerd op Amazon.com
Geverifieerde aankoop
No doubt, you are trying to get ahead in whatever ‘getting ahead’ means to you. But so often an obstacle seems to stand in your way. Yes, there are a few people who report having planned their charmed life or their business success and had it unfold almost exactly as planned, and with style and elegance. Amazing, but never true. Most people blocked by the obstacles of time, money, connections, opportunity and more, do nothing.
This book has a fascinating take on ‘being stuck’ – it is a primer on how to turn adversity to advantage, as the subtitle explains.
Let me state upfront – I am bored by motivational talks and books. I find very little about them interesting or useful twelve hours later. This book is not a motivational text, though it is motivating as many good books are.
The “Ancient Art” of the subtitle is referring to the wisdom and insight of the Stoic philosophers. These writings or thoughts influenced all the people Holiday uses as examples of this approach to obstacles of life. The circumstances of these people would leave most disoriented, reactive, torn and even paralyzed. As Holiday shows “some seem to turn those very obstacles, which stymie us, into launching pads for themselves.”
Knowing that there are heroes doesn’t help us to become heroes, but knowing how they became heroes, does. The value of this book is that it offers an ancient and profound method and framework for understanding, appreciating, and acting in the face of the obstacles life throws at us.
Turning obstacles into the way forward takes many forms. For the great Athenian orator, Demosthenes, it was a relentless drive to improve himself through action and practice. For Abraham Lincoln it was humility, endurance, and compassionate will. In each case, all the people cited in this book were not born with the attributes it took to succeed, and many faced unimaginable horrors, from imprisonment to debilitating illnesses, and of course the day-to-day frustrations we all endure.
So, what did they do? “They had the ability to see obstacles for what they were, the ingenuity to tackle them, and the will to endure a world mostly beyond their comprehension and control,” Holiday explains.
The perspective is not a self-delusional, positive and happy one, ‘this is not so bad’, but rather, ‘I can make this good’.
The starting point is maintaining a state of mind that one of Holiday’s examples, the extraordinary businessman, John D. Rockefeller, had perfected: cool headedness and self-discipline.
When America send the first astronauts into space, they trained them in one skill more than in any other: the art of not panicking. When people panic, they make mistakes. They just react, but not to what they need to react to, but to their survival hormones. At 150 miles above Earth, panic is suicide. Panic had to be trained out of the astronauts and it does not go easily. It must be trained away, through persistent, repeated attempts at not panicking, until you don’t.
Talent isn’t the most important characteristic for success, grace and poise are, because these precede the opportunity to deploy your talent.
The action after the panic allows for a change of perception that is a prerequisite for right action. George Clooney spent his first years in Hollywood getting rejected at every audition. He desperately wanted the producers and directors to like him, and they didn’t. He blamed them for not seeing how good he was. His life changed when he changed perspective, from self-centredness to that of other-centeredness, not possible in panic mode.
Producers need to find the right actor to cast in their film, and they all hope that the next person to walk into the room is the right actor. When Clooney realized that he was the answer to their prayers, not the other way around, his performance improved and so did his career.
Consider the refusal to fund your company. I could be an obstacle, or a call for a change of action. Getting the person to fund you this isn’t up to you, but the decision to refine and improve your presentation is.
Consider the number of exceptional businesses started during depressions or economic crises.
Fortune magazine was founded soon after the crash of 1929. Hewlett-Packard, and Revlon in the Great Depression. General Motors in the panic of 1907. Microsoft in the recession in 1973-75. LinkedIn during the burst of the dot-com bubble. Half the companies in the Fortune 500 were started under adverse conditions.
Rather than focus on the difficulties of an economy in free-fall, they focused on what they needed to do to succeed, and that produced the difference. This difference requires presence of mind.
Andy Grove, former CEO of Intel, said “Bad companies are destroyed by crisis. Good companies survive them. Great companies are improved by them.” In like fashion, great individuals find a way to transform weakness into strength.
This is essentially a very practical book which will introduce you to a wealth of important ideas beyond what I have introduced in this column. They will be of extraordinary value as you try to facedown business crises.

*Ian Mann of Gateways consults internationally on leadership and strategy and is the author of the soon to be released ‘Executive Update’.

Amazon Customer
5,0 van 5 sterren They are easy to read
11 september 2017 - Gepubliceerd op Amazon.com
Geverifieerde aankoop
I'm into self-improvement and optimization, and many of the podcasts I listened to have mentioned Ryan Holiday and his books, primarily this one and Ego is the Enemy. I have a lot of books on my shelf, but Ryan's writing truly stands out. The chapters are short, effective, and extremely well-written. It's actually entertaining to read this book, which consists of short stories that will genuinely change your mindset.

Most chapters are only 4-8 pages long, but they pack a punch. They are easy to read, but so thoughtful and packed with content that you can spend days just going over and absorbing the lessons from a single chapter. On the other hand, you can also read 100+ pages in one sitting, because it's truly hard to put down the book.

Usually books like this will feel boring - like you've already heard the subject hundreds of times and can anticipate what's coming next, leaving your mind to wander. Ryan's books are rare, instead they read like a hidden treasure, as the knowledge in the books is powerful, but easily read and applied. I've since ordered and read all of Ryan's books, and they are gold. Anytime I feel stuck in life, I know I can pick up this book and receive motivation and insight to keep conquering seemingly insurmountable challenges. Timeless and can be read again and again.
Meer lezen
12 mensen vonden dit nuttig
Vertaal recensie in het Nederlands

Isaiah Hankel
5,0 van 5 sterren A book for successful businessmen and academics
6 mei 2014 - Gepubliceerd op Amazon.com
Geverifieerde aankoop
The Obstacle is the Way digs into how knowledge and reason are in fact the highest good, as well as how to stay indifferent to pleasure and pain and how to respond to the vicissitudes of fortune objectively. The key is to not let your emotions color your perception of the world.

Ryan not only provides a great review of stoicism, he does an excellent job at articulating exactly how this school of thought can be applied to any problems that you might be facing now as you try to advance your career or transition from academia into a new career. He also provides an ample number of takeaways in the book. The Obstacle is the Way goes beyond the philosophy of stoicism simply by making the philosophy actionable. Reading this book will make you take action. Rational action.

If you're looking to:

...then this book is for you. The Obstacle is the Way is rooted in concrete, everlasting principles, not processes or fads that come and go with the wind. By reading this book, you will understand these principles and you will be able to make use of them to get what you want.

If you want to get ahead, the Obstacle is the Way is highly recommended.
Meer lezen
29 mensen vonden dit nuttig
Vertaal recensie in het Nederlands

margo c
1,0 van 5 sterren Illegal. Should not be sold on Amazon
9 juli 2019 - Gepubliceerd op Amazon.com
Geverifieerde aankoop
This book states on the back: "This book is for sale in India, Bangladesh, Bhutan, Nepal, Pakistan and Sri Lanka......Not for export elsewhere." This book is very cheaply made. Poor paper quality--basically like a thin brown paper bag. Binding will fall apart after one or two readings. Waited way too long to get this poorly made book.
Meer lezen
7 mensen vonden dit nuttig
Vertaal recensie in het Nederlands

Grant Senzani
5,0 van 5 sterren Epic, a book that is a must have!
3 september 2017 - Gepubliceerd op Amazon.com
Geverifieerde aankoop
A must read if you are serious about changing your life for the better. My greatest take away amongst many? Philosophy is about actions.
Meer lezen
8 mensen vonden dit nuttig
Vertaal recensie in het Nederlands
Ga naar Amazon.com om alle 149 recensies te bekijken 4,4 van 5 sterren
Terug naar boven
Over ons
Verkoop bij ons
We helpen je graag
© 1996-2020, Amazon.com, Inc. en dochterondernemingen