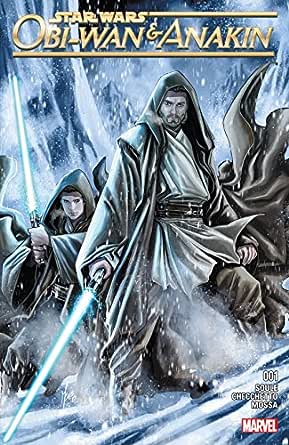 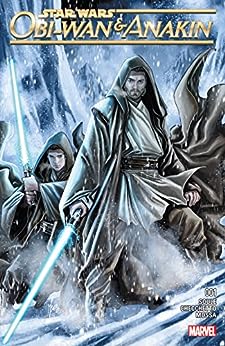 Before their military heroism in the Clone Wars, before their tragic battle on Mustafar, and many decades before their final confrontation on the Death Star...they were Master Obi-Wan Kenobi and his Padawan learner, Anakin Skywalker. It's been a few years since Obi-Wan pledged to train the young "chosen one," but even as they have grown closer through training, it has been a difficult road. Now, called to a remote planet for assistance, Master and Padawan may be pushed to the breaking point. Writer Charles Soule (Lando, She-Hulk, Daredevil) and artist Marco Checchetto (Star Wars: Shattered Empire, Avengers World, Punisher) bring us a tale of the Jedi at the height of their power.
click to open popover

Jedi Dropout
5,0 van 5 sterren Amazing Art
18 december 2016 - Gepubliceerd op Amazon.com
Geverifieerde aankoop
The art in this series of comics is by far one of my favorites. I also love the futuristic steampunk style planet this story takes place on. Truly a must have for any Star Wars fan, but you probably already knew that.
Meer lezen
Vertaal recensie in het Nederlands

C Theodore howlett III
5,0 van 5 sterren These are best in canon
18 augustus 2016 - Gepubliceerd op Amazon.com
Geverifieerde aankoop
Finally the prequels are honored by Lucas film since Disney bought them. This new OT only philosophy they have adopted is kind of insulting to fans that liked I II and III
Meer lezen
Vertaal recensie in het Nederlands

Victor Johnson
5,0 van 5 sterren So far so good
15 mei 2016 - Gepubliceerd op Amazon.com
Geverifieerde aankoop
Starting out fairly strong. Definitely makes me want to finish the series. I can see many stories branching off just from the interactions of this issue.
Meer lezen
Vertaal recensie in het Nederlands

Ezequiel Colòn
4,0 van 5 sterren They're great
8 april 2016 - Gepubliceerd op Amazon.com
Geverifieerde aankoop
If only these books were longer...but they are extremely well made... and I read them along with watching the movies. It's a descent read
Meer lezen
Vertaal recensie in het Nederlands