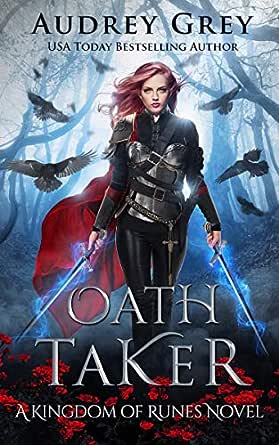 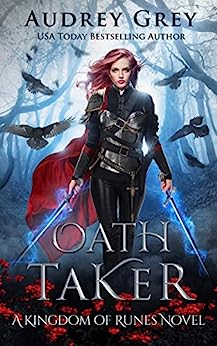 Perfect for fans of Sarah J. Maas and Holly Black, this first book in a dark and action-packed new series is impossible to put down!

​
After the Prince of Penryth saved her from captivity, seventeen-year-old Haven Ashwood spends her days protecting the kind prince and her nights secretly fighting the monsters outside the castle walls.

When one of those monsters kidnaps Prince Bell, Haven must ally with Archeron Halfbane and his band of immortals to rescue her friend.

Her quest takes her deep into the domain of a warped and vicious queen where the rules are simple: break her curse or die.

Lost in a land of twisted magic and fabled creatures, Haven finds herself unprepared, not just for the feelings she develops for Archeron, but for the warring powers raging inside her.

Her rare and forbidden type of magic may be their only hope . . . but mixing light and dark comes with a steep price.

Faced with impossible love, heartbreaking betrayals, and a queen intent on destroying the realm, only one thing remains certain.

Haven must shatter the curse or it will devour everything she loves.

Welcome to the Kingdom of Runes where immortals and humans clash, light and dark magic reign, and mythical creatures lurk in the shadows. If you like fierce heroines, enemies-to-lovers romance, wild plot twists, and endearing characters that stay with you long after you reach the end, you need to discover the book readers are calling dark fantasy at its best. Just make sure to clear out some space on your calendar first!

**Oath Taker was previously published in the boxed set Shattered Worlds under the name Curse Breaker. This is a revised second edition. The Kingdom of Runes series is upper/mature YA and contains mild cursing and adult situations, including romance.**

"Could not put this book down! I was in a massive slump after Sarah J Maas finished her throne of glass series nothing was hitting the spot UNTIL NOW!" -Sarah Edwy-Smith , Goodreads Reviewer ★★★★★

“Grey has a major talent for world building and writing strong female characters. The story was exciting and I could hardly put this book down.”
-Lauren G., Amazon Reviewer ★★★★★

"Audrey Grey has such a way with words and her story telling in unique and very twisty (you won't see a lot of things coming!)."
-JK Leonard, Amazon Reviewer ★★★★★

“Audrey Grey is a genius storyteller that has woven a witty tale of magic, adventure, action, romance and danger.”
-Cassie J., Goodreads Reviewer ★★★★★

“OMG I freaking love this story. Audrey's writing is descriptive, captivating and hooks you in from the first moment on. It was an amazing story with absolutely great characters (loved the side characters as well). I cannot wait to read what else Audrey has in store for us.”
-Jamie S., Goodreads Reviewer ★★★★★
click to open popover

Natasha
4,0 van 5 sterren A world to fall in love with
28 mei 2019 - Gepubliceerd op Amazon.com
Geverifieerde aankoop
I love Audrey Grey's books so when I found out she had rewritten my favorite book to make it a longer series I was beyond excited. The rewrite had a lot to live up to since the original version was breath taking. I'll admit that I didn't love this one quite as much as the original but I can see where it's going and I know the next books will reach my expectations.

So let's talk about what I loved. The world building and explanations are exactly what I was missing in the original version. I feel like I understand this world way more than I did before. I also loved all the little details that make it less of a story and more of an immersive experience. This whole world and the characters are just absolutely brilliant. I'm so happy that we got more depth and emotional attachment to the band of Solis traveling to break the curse.

Ok, now I have to talk about what I don't like. I hate doing this but there were some changes that I didn't care for at all. The biggest change I disliked was Stolas' name. It used to be Allucard and it was so easy to remember but when it changed to Stolas I had trouble remembering it because the race of Sun Lords are known as Solis so Stolas just doesn't stand out. I also didn't like Haven as much in the middle of this book but I understand why she had to become a little less mature than she had been. If she was already perfect how could she have any character growth? And by the end of the book it's easy to see how much she learned and matured so I'm incredibly excited to see her in the future books. And honestly, if these are the worst things about this book that says a lot because these are just nit picky things that I see because I've been obsessed with this series for what feels like years.
*I'll definitely reread this book and I absolutely recommend it to everyone!

*Update*
So I want to rescind some of the remarks I make about the naming issues I had. Audrey reached out to explain why the name had to change and now that I understand the reasoning behind it I completely agree with the changes she had to make and support her entirely. I struggled to decide if I should rewrite the review but decided that I needed to keep it the way it is for authenticity but I should update everyone with my new opinion.
Now go and read all her books! *

Amanda B Steele
5,0 van 5 sterren I NEED MORE STAT!
23 mei 2019 - Gepubliceerd op Amazon.com
Geverifieerde aankoop
This book. I don't even know how to accurately put into words how this book stole my every thought and brain cell. I was enraptured within the first couple of pages and I couldn't put it down until there was no more for me to read.
I always feel skeptical when someone compares their book to SJM or Holly Black, but this story warrants ALL THE ATTENTION AND PRAISE! It got me out of a reading slump and I was absorbed entirely. I became one with the story and I'm #sorrynotsorry to my family for ignoring them.
The world building is incredible. I felt like I could actively see each scene unfold and the more that was explored, the more I wanted to be transported into the world. These are some of the most fleshed out characters I've ever read and they're not just fleshed out, they're COMPLEX. As the story unfolds, dynamics stir and change and it feels effortless.
I'm a super fan of Beauty and the Beast retellings, and this has to be my fave by far. It's gender-swapped and the MC, Haven, is Prince Bell's royal companion guard. A girl guarding a dude. YES PLEASE.
Haven has been put through the ringer in her life, but she her wants are simple: protect Bell and find out where she came from. The first one trumps all others in her mind which makes her the most loyal friend ever. She's lived with hardship and endured discrimination at every turn, but she lets it drip off her like rain water.
Prince Bell is taken by the Shadow Queen and Haven must fight tooth and nail to find him and bring him back. She has to wade the waters with a band of immortal Solis to break the curse that ravages the land and IT IS AMAZING!
I wish I could give this story 10 stars. It will forever be a favorite and I'm salivating for book 2 like whoa. You'd be a fool to pass this up!

Bec Wolfe-Thomas
1,0 van 5 sterren Just can not get into it.
14 juni 2019 - Gepubliceerd op Amazon.com
Geverifieerde aankoop
I really wanted to like this but absolutely nothing is drawing me into this book. This keeps being touted as a book similar to a Sarah Maas book but I really do not see much of similarity at all. The why of everything is pretty confusing and the MC likes to do stupid stuff for reasons... I'm going to just stop now, this is not working for me at all.
Meer lezen
15 mensen vonden dit nuttig
Vertaal recensie in het Nederlands

Alyssa Dietrich
5,0 van 5 sterren This book has it all!
23 mei 2019 - Gepubliceerd op Amazon.com
Geverifieerde aankoop
Like my headline says, this book has it all! Haven the main character is strong, but also flawed. I really liked that about her, she made some reckless choices but was a strong heroine. The whole plot takes off when her best friend Bell is taken for his powers...or what the evil queen thinks are his powers. Haven sets out on a path to get him back and is met by Archeron and his friends. This is a relationship that definitely doesn’t start off right but you kind of feel those twisty undertones of some possible hidden feelings. One might think it’s as simple as the classic hate turns into love type of thing...BUT we can’t forget about Stolis. This is another really interesting relationship that may not be as it seems. I found myself waiting for the chapters that involved Stolis. Something about him just completely drew me in. The book doesn’t end with resolution bc there is more to come! And trust me this is one you will be hanging off of the edge of your seat waiting for the next release! Audrey Grey is an amazing author and her works truly have all of the elements to be a BIG deal!
Meer lezen
8 mensen vonden dit nuttig
Vertaal recensie in het Nederlands