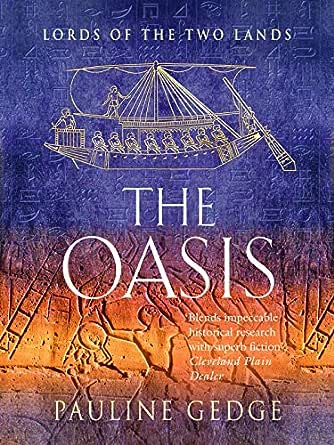 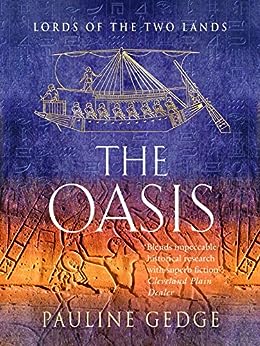 He must fight the war his father started – whatever the cost.

After the death of his father, Kamose must assume command of the rebellion. Leading the native princes against their overlords, he makes a perilous sweep up the river Nile toward the delta strongholds of the Hyksos, but the long domination of the invaders has given them an iron grip of the land.

Despite the odds he must fight the battle his father started against the ruthless rulers who have held Egypt for two hundred years. The war will be gruelling, and many will fall. Can the Tao family survive, gain the favour of the Gods and save Egypt?

The Oasis, second in the epic Lords of the Two Lands series, is perfect for fans of Bernard Cornwell and Conn Iggulden.

Praise for The Oasis

‘Gedge excels at setting the scene and subtly evoking a sense of the period as she tells a timeless story of greed, love, and revenge’ Kirkus Reviews

Pat Savu
5,0 van 5 sterren The Enemy within
21 oktober 2000 - Gepubliceerd op Amazon.com
Geverifieerde aankoop
In this book Pauline Gedge continues her saga of the founders of the New Kingdom in ancient Egypt. Most of the people reading this book already know how this will turn out from reading history books, but that doesn't take the edge off the story at all. We know that Kamose will not live wear the Double crown or to successfully storm the citadel of Hyksos. Pauline Gedge has made Kamose come alive. She has painted the picture of an introspective, intense man who will do anything to accomplish his goal of expelling the Hyksos. It is very hard to say good-bye to him even though we know his brother Ahmose will be a better Pharaoh. Although great military engagements are won, the family of Tao find it is the enemies within that are harder to vanquish in their bid to expell the Hyksos and catapult their house to the status of divine. Altogether enjoyable, inspiring, and sad at the same time.
Meer lezen
3 mensen vonden dit nuttig
Vertaal recensie in het Nederlands

Janet L. Gomez
5,0 van 5 sterren What a Great Read
20 oktober 2002 - Gepubliceerd op Amazon.com
Geverifieerde aankoop
The author's goal was to "rehab" Kamose Tao in history's eyes and she has indeed succeeded. The Lord of the Two Lands trilogy continues with the intensity and determination well established in the first book. Even though the story line is recorded in history, there is no real sense of predictability. Lots of action, repeated demonstrations of survival of the fittest, and treachery abounds. I thank Ms. Gedge for including a map, a bibliography, and for sating my thirst for historical fiction! I'll say a little prayer to Thoth that she continues to create such enjoyable works.
Meer lezen
2 mensen vonden dit nuttig
Vertaal recensie in het Nederlands

Evelyn D. Batchelor
5,0 van 5 sterren Volume 2 of the Trilogy
16 februari 2013 - Gepubliceerd op Amazon.com
Geverifieerde aankoop
The Hyksos - interlopers from Asia Minor with Cretan and Minoan trading connections - ruled Egypt for over 200 hundred years. Then the native princes, roused by Seqenenra Tao of Weset, launched a rebellion. After his death, his son Kamose assumes command of the rebels and leads his troops on a perilous sweep up the river Nile toward the delta stronghold of the Hyksos Pharoah Apepa. But Kamose cannot lead the Egyptians to ultimate triumph.
Meer lezen
Vertaal recensie in het Nederlands

S. Smith
5,0 van 5 sterren Captivating...
9 mei 2001 - Gepubliceerd op Amazon.com
The Oasis, the second volume of Pauline Gegde's Lord of the Two Lands Trilogy, is even more captivating the the first. Following the death of Sequenenra Tao at the hands of feared but brilliant General Pedzeku, the members of the House of Tao are stipped of their titles, nobility and power to rule over their ancestral home of Waset by the Setiu King Apepa. The idea of a foriegn king ruling over Egypt does not sit well with Sequenenra's sons Kamose and Ahmose despite all that they have lost and, with their family's permission, they decide to restore Egypt to the rightful Egyptian rulers, the Taos, or die in the process.
At times gruesome and painful, the Oasis details exquistely the price war can exact on those who wage it. The decision to take life, regardless of how noble its reason, is one which weighs heavily on the soul. Gedge's character Kamose Tao, who proclaims himself Pharoah and sets out to purge Egypt of the Setiu who have usurped the country from its rightful citizens, fights many bitter, bloody battles in which innocents are killed to right what the Ancient Egyptians refer to as Ma'at - a sense of law, righteousness and justice. The development of this character from an introspective older brother, favored by his grandmother, to a king who speaks his mind without regard to consequences and who is tormented by the horror of a war of his own making, is indeed compelling.
Additionally, as you will always find in the work of Pauline Gedge, Egypt is recreated in intricate detail. The reader is transported to a time when the 17th Dynasty is concluding and the Great 18th Dynasty is about to leave the womb...
I can't wait to read The Horus Road (vol 3)!