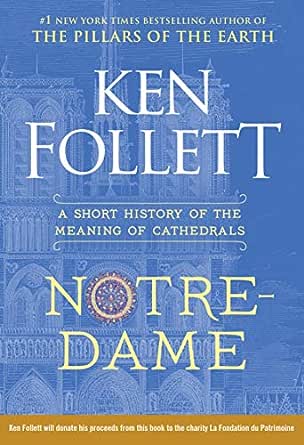 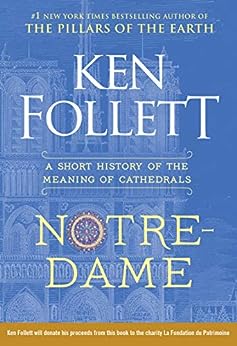 Notre-Dame: A Short History of the Meaning of Cathedrals (English Edition) Kindle-editie

“The wonderful cathedral of Notre-Dame de Paris, one of the greatest achievements of European civilization, was on fire. The sight dazed and disturbed us profoundly. I was on the edge of tears. Something priceless was dying in front of our eyes. The feeling was bewildering, as if the earth was shaking.” —Ken Follett

In this short, spellbinding book, international bestselling author Ken Follett describes the emotions that gripped him when he learned about the fire that threatened to destroy one of the greatest cathedrals in the world—the Notre-Dame de Paris. Follett then tells the story of the cathedral, from its construction to the role it has played across time and history, and he reveals the influence that the Notre-Dame had upon cathedrals around the world and on the writing of one of Follett's most famous and beloved novels, The Pillars of the Earth.

Ken Follett will donate his proceeds from this book to the charity La Fondation du Patrimoine.

'Two days after Notre Dame burned, I flew to Paris to appear on the TV programme La Grande Librairie for a discussion about cathedrals. The following morning I had breakfast at the Hotel Bristol with my French publisher and she asked me to write a short book about Notre Dame and what it means to all of us. She said she would donate the publisher's profits to the rebuilding fund and, if I wished, I could do the same with my royalties. Yes, I said; of course, I'd love to.'
click to open popover

P.B.Reader
4,0 van 5 sterren Notre Dame's History - Kind Of
29 oktober 2019 - Gepubliceerd op Amazon.com
Ken Follett’s latest book is a long essay he wrote during the week after the Notre Dame fire in 2019. A prospective reader would assume from the title that this was an intellectual essay about cathedrals in general and Notre Dame in particular. The prospective reader would be wrong. This is more of an essay loosely held together by Notre Dame. Topics discussed range widely – from a very short biography of Victor Hugo and his book “The Hunchback of Notre Dame” to the 1844 renovation of Notre Dame to Charles DeGaulle preempting the Allies in taking over the 1944 victory celebration after the end of WWII that concluded with a mass in Notre Dame amidst sniper fire. The only chapter that truly discusses the meaning of cathedrals is the last and even then it is interspersed by Follett blowing his own horn about how much he knows about cathedrals because he wrote a bestselling novel that centered on the building of a fictional cathedral.

Setting all the above aside, this is a fast read full of tons of historical trivia about Notre Dame and the people who had a hand in making it the stunning edifice it was until the fire in April 2019.

If you are at all interested in history and love the cathedrals of Europe, then this is the book for you. An added bonus is that if you purchase this book, Follett will donate his proceeds from the book to the charity La Fondation du Patrimoine, a non-profit organization collecting donations for the restoration of Notre Dame.

Thanks to Viking and Edelweiss for an eARC.
Meer lezen
47 mensen vonden dit nuttig
Vertaal recensie in het Nederlands

Ken Kochczynski
1,0 van 5 sterren Extremely Disappointing
6 november 2019 - Gepubliceerd op Amazon.com
Geverifieerde aankoop
I have love every book by Ken Follett, up until now. I realize this book was for charity also. But some of these reviews had more meat in them than the book. It read like he just threw in his notes from his Kingsbridge series with his thoughts of the day on the Notre-Dame fire. Save a tree and cut down on your carbon footprint and just send in $20 to the Notre-Dame restoration fund.
Meer lezen
17 mensen vonden dit nuttig
Vertaal recensie in het Nederlands

Kindle Customer
2,0 van 5 sterren Historic Repetition
2 november 2019 - Gepubliceerd op Amazon.com
Geverifieerde aankoop
I too felt enormous pain as Noted Same burned, and as a fan of Follett, I looked forward to his essay. How disappointed I was to read a rehashing of what I already knew. Missing from this time was any New perspective, nor any discussion of the current efforts and arguments regarding its current reconstruction.
Meer lezen
14 mensen vonden dit nuttig
Vertaal recensie in het Nederlands

Nate Caplan
2,0 van 5 sterren A disappointing book not even close to Follett quality
1 november 2019 - Gepubliceerd op Amazon.com
Geverifieerde aankoop
Very disappointing. I am a great fan of Follett's work but this one was obviously put together piecemeal and has maybe 30 pages of decent content. Of the listed 80 pages of content, most are pulled together from other sources including a number of drawings and art work that is obviously added to "bulk up" the book. The little content that is original is interesting and informative but there is a dearth of it making this book feel like a rip-off.
I tried to get a refund but apparently, that's not possible with e-books. I now the proceeds go to rebuilding the Cathedral. Having been many times I am all for helping but I resist getting cheated.
Meer lezen
11 mensen vonden dit nuttig
Vertaal recensie in het Nederlands

Jennifer Pye
5,0 van 5 sterren Written with love
29 oktober 2019 - Gepubliceerd op Amazon.com
Geverifieerde aankoop
Ken Follett is my favorite author, I have read every book written by him and can't wait for the prequel to The Pillars of the Earth. I loved his explanations of Notre-Dame, why it is important. It was also so great to see how he tied Pillars into it and awesome to see his thought process for Pillars. I love that he is giving the proceeds to rebuilding the cathedral of Notre-Dame.
Meer lezen
10 mensen vonden dit nuttig
Vertaal recensie in het Nederlands
Ga naar Amazon.com om alle 102 recensies te bekijken 4,2 van 5 sterren
Terug naar boven
Over ons
Verkoop bij ons
We helpen je graag
© 1996-2020, Amazon.com, Inc. en dochterondernemingen