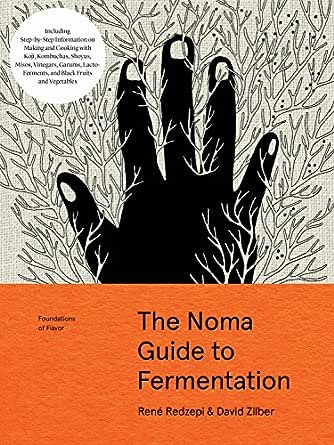 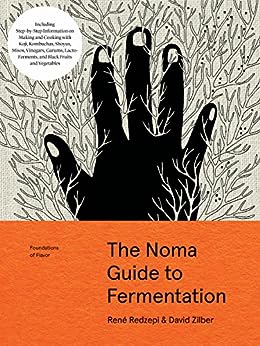 The Noma Guide to Fermentation (Foundations of Flavor) Kindle-editie

“An indispensable manual for home cooks and pro chefs.” —Wired

At Noma—four times named the world’s best restaurant—every dish includes some form of fermentation, whether it’s a bright hit of vinegar, a deeply savory miso, an electrifying drop of garum, or the sweet intensity of black garlic. Fermentation is one of the foundations behind Noma’s extraordinary flavor profiles.

Now René Redzepi, chef and co-owner of Noma, and David Zilber, the chef who runs the restaurant’s acclaimed fermentation lab, share never-before-revealed techniques to creating Noma’s extensive pantry of ferments. And they do so with a book conceived specifically to share their knowledge and techniques with home cooks. With more than 500 step-by-step photographs and illustrations, and with every recipe approachably written and meticulously tested, The Noma Guide to Fermentation takes readers far beyond the typical kimchi and sauerkraut to include koji, kombuchas, shoyus, misos, lacto-ferments, vinegars, garums, and black fruits and vegetables. And—perhaps even more important—it shows how to use these game-changing pantry ingredients in more than 100 original recipes.

Fermentation is already building as the most significant new direction in food (and health). With The Noma Guide to Fermentation, it’s about to be taken to a whole new level.
click to open popover

marjeneg
3,0 van 5 sterren Who's the audience?
13 november 2018 - Gepubliceerd op Amazon.com
Geverifieerde aankoop
I will write a fair review (hence the 3 stars, which I think is generous) despite my major disappointment. I follow the Nordic Food Lab, have watched countless videos about it, I've used it as inspiration and have read their scientific articles. I was therefore expecting more of this "cookbook." I make koji, miso, koji "aminos" etc. so I'd say I'm an intermediate koji hobbyist. I have a fermenter for my koji. However, this book did not give me any new information - there's no learning how to do your own experiments, there's just some ideas an inspiration, which you can easily find if you dig a little, or if you have enough creativity. On the other end of the spectrum, a lot of these are even too difficult for me - lots of recipe that require fermenting at a certain temperature for 10 weeks, using ingredients like bee pollen and fermenting it (what kind of home cook has this budget?!), so I can't help asking, who's the audience? It's neither a beginner book, for people getting into home miso and koji-making (The Book of Miso is still the book after all these years and is more comprehensive), nor is it for people who have dabbled looking for more. It gets a few stars because it's a pretty book, has nice pictures, and it's one of the first of its kind - at least starting perhaps a koji-making fad.
Meer lezen
182 mensen vonden dit nuttig
Vertaal recensie in het Nederlands

Arnold Irving
2,0 van 5 sterren Absurd. And poorly bound
19 december 2018 - Gepubliceerd op Amazon.com
Geverifieerde aankoop
My copy of this book was bound poorly (the covers didn't sit flat), so I sent it back. But I couldn't bring myself to ask for a replacement. I would never make more than one or two things from this book, and neither will you. If you want an introduction to fermentation, Sandor Katz's books are just fine. This book is clearly for foodies, not for cooks -- the amount of special equipment you'd need and ingredients you'd have to mail order is absurd. Basic fermentation is not that hard, the web has plenty of info on recipes and techniques -- your experiments are extremely unlikely to poison you, and you'll come away with a lot more knowledge than you will from this foodie-bait.
Meer lezen
61 mensen vonden dit nuttig
Vertaal recensie in het Nederlands

Hunter Angler Gardener Cook
4,0 van 5 sterren Technical in a Good Way
7 december 2018 - Gepubliceerd op Amazon.com
Geverifieerde aankoop
As an experienced fermenter of many things, this book is valuable to me. I was hoping for ferments that dealt with fish, meat and dairy, but there are none in this book. I'd be excited to see how NOMA deals with those foods. There are innumerable interesting projects to be made from this book, both verbatim and as touchstones for your own ingredients and ideas. The biggest issue I have with it is that this is a book, essentially, of condiments. Virtually everything in here is to be used as either a side, a small element in a larger dish, or as a straight-up condiment. This is not necessarily bad, but remember that if you spend a year aging your own soy sauce, it is, well, just soy sauce. So if you're the sort of person who digs that sort of thing (as I am), you'll like it. If not, look elsewhere.
Meer lezen
34 mensen vonden dit nuttig
Vertaal recensie in het Nederlands

AimsInBrooklyn
5,0 van 5 sterren The Whys of Fermentation
26 oktober 2018 - Gepubliceerd op Amazon.com
Geverifieerde aankoop
The Noma Guide to Fermentation doesn't just teach you "how" to ferment, it teaches you "why." And the biggest why is that the ferments in this book will make your food delicious. The book starts with very easy projects like lacto-fermentation (typical recipe: fruit, salt, jar, time) on through the complexities of making shoyu, the world's most popular fermented flavor. Yes, you can make your own soy sauce! More than that, this guide gives you the foundation (the "whys") that you can use as a jumping point to go beyond the recipes in the book to #fermentallthethings. Thank you, Rene and David, for sharing your knowledge.
Meer lezen
32 mensen vonden dit nuttig
Vertaal recensie in het Nederlands

Samuel M. Throssell
5,0 van 5 sterren Fermentation Perfected!
17 oktober 2018 - Gepubliceerd op Amazon.com
Geverifieerde aankoop
This book has been written by the fellas from Noma, former world number 1 restaurant on the planet. Rene made clear early on in this book that fermentation plays a HUGE part in everything they do at the restaurant. Each recipe is tried and true, each recipe has been utilized at their restaurant. They explain how to use each recipe and give you ideas on different things you can do.