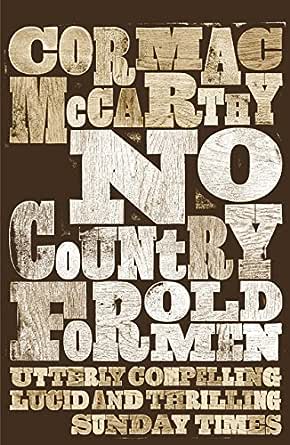 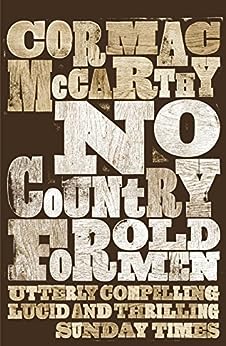 Adapted by the Coen Brothers into an Academy Award winning film, No Country For Old Men is a dark and suspenseful novel from Cormac McCarthy, author of The Road.

Llewelyn Moss, hunting antelope near the Rio Grande, stumbles upon a transaction gone horribly wrong. Finding bullet-ridden bodies, several kilos of heroin, and a caseload of cash, he faces a choice – leave the scene as he found it, or cut the money and run. Choosing the latter, he knows, will change everything. And so begins a terrifying chain of events, in which each participant seems determined to answer the question that one asks another: how does a man decide in what order to abandon his life?

Dee Arr
5,0 van 5 sterren Ethical Dilemmas All The Way Around Embellish a Great Story
16 december 2017 - Gepubliceerd op Amazon.com
Geverifieerde aankoop
This book is built around the premise that any one of us can think we are making a good decision only to later find out the depths of how bad that decision actually was. Llewelyn Moss chose to take a suitcase full of money from a drug deal gone bad, thinking he would never get caught…and it all goes downhill from there.

This was my first Cormac McCarthy book, suggested by a friend who well knows my penchant for Strunk and White’s “The Elements of Style.” Commas are a rare breed, and quotation marks were extinct long before this book was written. Even so, the author’s style is fairly easy to understand, and the story drives this book anyhow. The down-home conversations reveal a lot about the characters, and the interludes with Sheriff Bell (where it seems as if he is speaking directly to us) tell us everything we want to know about the man, and more.

Mr. McCarthy balances multiple characters, allowing each to share the main stage and have their moment to shine as the book races to an unexpected climax. The plot examines motivations, particularly why different people make different decisions and the underlying currents that cause or force them to continue, right or wrong, to embrace whatever path was chosen. These moments are very revealing, and it is interesting to view each character’s interpretation of what is ethical behavior. This is not a speed read. The author’s style arm-twists us into slowing down, and for that I am grateful. Five stars.

Frequency Jones
5,0 van 5 sterren A modern-day masterpiece
23 september 2017 - Gepubliceerd op Amazon.com
Geverifieerde aankoop
What more can I say about this book that hasn't already been said? This is an incredible book. I read The Road prior to this book and it's difficult to say which is my favorite. Both are fantastic. I read the parts of Sheriff Ed Tom Bell in Tommy Lee Jones' voice because I just can't think of anyone else who would've been better cast in that role. And Mr. Chigurh is truly a psychopath in this book. A wonderful contrast to the aging sheriff.
Meer lezen
18 mensen vonden dit nuttig
Vertaal recensie in het Nederlands

thomas templeton
5,0 van 5 sterren He juxtaposes good, decent ordinary human beings up against the 21st ...
11 juli 2018 - Gepubliceerd op Amazon.com
Geverifieerde aankoop
Unfortunately, I watched the movie prior to reading the book and I have to admit the book holds its own to a superb Coen Brothers film. McCarthy
writes a hard, cold, mean prose almost devoid of heroes. He juxtaposes good, decent ordinary human beings up against the 21st centuries' Hannibal Lecter only this psychopath has absolutely no charm nor charisma nor overpowering intellect. Anton Chigur is a psychopath with only one saving grace; he is as relentlessly ruthless and savage as death. Read the book and maybe you'll root for the sheriff or the man who stole the dope deal gone bad's brief case full of drug money. It is a truly remarkable and enjoyable book.. The 20th century had Hannibal Lecter, a suave and brilliant psychopath. The 21st century has Anton Chigur, a frozen creature without even a hint of a soul. Take your pick: charm and great taste or the bloodless soulless threat of a great white shark on the hunt.
Meer lezen
7 mensen vonden dit nuttig
Vertaal recensie in het Nederlands

C. M Mills
5,0 van 5 sterren No Country for Old Men is a novel of violence, revenge and murder by Cormac McCarthy the Pulitzer Prize winning author
14 december 2015 - Gepubliceerd op Amazon.com
Geverifieerde aankoop
No Country in for Old Men is a bloody and bold novel. The story takes place in Texas in 1980. The plot concerns a young man named Moss who comes across a bloody crime scene in the desert. He discovers several dead drug dealers and teals the millions of dollars he finds on their corpses.
Moss flees from a devilish homicidal maniac whose name is Anton Chigurh An old Texas sheriff Bell is given the difficult task of tracking down the evil Chigurth and saving the life of young Moss and his wife.. The exciting story will keep your interest from the first to the last page., A quick read!
The book excels in the use of dialogue. These characters speak as if they are real people. The graphic violence will be disturbing to many readers. This is not for young and impressionable readers. The novel was made into a famous movie which was awarded the Best Picture Oscar in 2007.
Meer lezen
14 mensen vonden dit nuttig
Vertaal recensie in het Nederlands

James Barton Phelps
5,0 van 5 sterren Dystopian Doom Drenched Fiction - But Superb Writing
14 december 2012 - Gepubliceerd op Amazon.com
Geverifieerde aankoop
I read the book once-not carefully - and knew I didn't get it. Then I read it again with some care; and when I put it down that second time it bothered me that I still didn't know what the book was really about. Then I saw the movie and it cleared up a lot of it; but there were still things I didn't understand - locations, time lines, identities., who if anyone has the money at the end of the book Above all you need a map of West Texas to follow the story; and you need to consult it often. And now I have gone back once again to clear some things up and think about what McCarthy was really trying to say, if anything. And I'm still not sure. But I need to get this review off my mind. So to the extent that McCarthy was writing for a knowing audience the book is a flop. To the extent that once again McCarthy was showing off his superb writing skills - particularly his ability to give us a dystopian story, to write doom drenched fiction it was a success. Would I read it again? Probably. Would I recommend it to you? Depends.

About McCarthy as a writer: No one writing today can say so much or describe so much on one page as McCarthy - and in words of few syllables. Nor can anyone writing today bring the reader into the picture as well as McCarthy nor sketch a character as well nor write conversation so well that you can almost hear the Texas twang, the rural patois of a good old boy Texas lawman. Read a page of McCarthy describing Llewellyn Moss's first view of the scene of four burned shot-up trucks surrounded by three dead bodies and one wounded man in the Texas desert and you are right there. Listen to Sheriff Ed Tom Bell talk to his uncle Ellis and you are in the room with them. I just wish he would be clearer. Was this a requiem for the good old days in West Texas? Was it a tribute to the men of that time? Was it a study of evil? (Frankly I have the same questions in respect to his fascination with evil in the only other McCarthy books I have read - The Road and Blood Horizon ) Was sit a Jeremiad against the hippie generation? The narcotics trade? Or was it just a good story interspersed with a lot of philosophy, giving Melville a run for his money? I guess it was all of these things. But I wish now that, having put the book down, I really knew what he was trying to tell me.

The obvious story is fairly clear; Moss finds the trucks and the men in the Texas desert just this side of the border. Everyone is dead except the wounded man asking for water. (Moss has none.) One of the trucks is loaded with bricks of cocaine. There is a man lying dead by a briefcase under a tree. The briefcase holds 2.3 million in hundred dollar bills. Moss takes it. He returns that night with water, but the man has been shot and the cocaine is gone. He realizes too late that he may not be alone, all terrain four wheelers with lights are in the vicinity and he is spotted. He runs. And a lot of the rest of the narrative is the chase. Obviously two sides have been cheated - one of the drugs, one of the money - and both are out to find Moss and the money. The principle agent of the chase is a psychopathic killer with almost supernatural powers - Anton Chigurth who, armed with a compressed air bottle connected to a cattle stun gun and a sawed off shotgun, manages in two hundred blood stained pages to kill Moss, his wife, his mother in law, a deputy, an innocent citizen, two or three hotel clerks, the business man behind the drug dealing - all in separate killings - and then three Mexicans in a gun fight all together; and if you can tell me after reading this book how Chigurth managed to find all these people (even though a transponder was hidden in the cash and accounts for his presence in at lest one of he killings) I'll buy you a good dinner at a place of your choice. McCarthy, being the man he thinks he is, doesn't have to explain. Chigurth just appears And there is no denouement, no satisfaction, no justice, no catharsis Though injured Chigurth just walks away out of the pages. Evil, points out McCarthy, is still out there - and always will be.

That's the narrative; but it's not the story. The story is that West Texas has changed so much since the end of World War II to 1980 (the period in which the narrative is set) that it is no longer a country for old men; and that is lamentable. Sheriff Ed Tom Bell, a man who is sure to steal your heart, tells the story in his own words, about how things are now, how things were then, what men should be like, about his opinions on life in first person italicized ruminations which begin and end the book and which are often interspersed into the narrative. They are the guts of what McCarthy has to say about life; and they are worth reading. The rest of the stuff is just well written bloody crime stuff. You'll love Ed Tom and adore his wife Lorraine who, though unready, cheerfully goes into retirement with Ed Tom who, after thirty-five years of being a sheriff. finds it is no country for old men.
JBP - December 2007
Meer lezen
26 mensen vonden dit nuttig
Vertaal recensie in het Nederlands
Ga naar Amazon.com om alle 1.025 recensies te bekijken 4,4 van 5 sterren
Terug naar boven
Over ons
Verkoop bij ons
We helpen je graag
© 1996-2020, Amazon.com, Inc. en dochterondernemingen