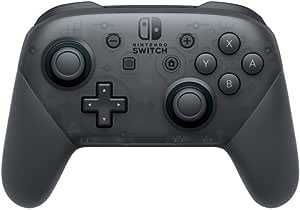 Peridot Antlers
5,0 van 5 sterren Nice
31 oktober 2017 - Gepubliceerd op Amazon.com
Platform: Nintendo SwitchEditie: StandardGeverifieerde aankoop
I like having a second controller and this one has more heft and a better feel than the joycons that come with the Switch (though the joycons are not bad I must say).

The Pro controller is an optional thing that's nice to have, but if you don't get one right away it's still fine.

The controller itself seems durable. The buttons have a good feel. I didn't have any trouble connecting it to the switch.

Jonathan German Del Rio
5,0 van 5 sterren Go big or go home
28 september 2017 - Gepubliceerd op Amazon.com
Platform: Nintendo SwitchEditie: StandardGeverifieerde aankoop
It feels like an actual game consel controller vs the joy stick. I bought for my TV in my living since I have a dock in every tv. Easily dock my switch and pick up this bad boy. You feel like you have more control of the game and if you have big hands like me, this is a blessing!!!
Meer lezen
Een iemand vond dit nuttig
Vertaal recensie in het Nederlands

Sheryl Okada
3,0 van 5 sterren Problem with Charging
11 oktober 2017 - Gepubliceerd op Amazon.com
Platform: Nintendo SwitchEditie: StandardGeverifieerde aankoop
I had bought 2 controllers, the first one would even charge the second one charged half way so I could try it out. It was good like the other controllers for the other systems. I returned both without any problems.
Meer lezen
Vertaal recensie in het Nederlands

commorancy
4,0 van 5 sterren Works well, but is not a 'Pro' controller
14 november 2017 - Gepubliceerd op Amazon.com
Platform: Nintendo SwitchEditie: StandardGeverifieerde aankoop
This controller is essential if you want to game properly on the Switch. Not only does it feel great in the hand, the offset joysticks (like the Xbox) are a welcome change from the Wii U controller. However, I've never been sold on the reversed XY and AB placement that Nintendo chooses to use on its controllers. I'd prefer if I could change the order of these buttons. I prefer the layout on the PS4 and Xbox controllers and I'd like to put this same layout onto the Nintendo controller.

After switching from the Xbox One or PS4, I am forever finding I press B instead of A or Y instead of X. It always takes me at least a week or so to get back into the Nintendo layout. Sometimes I just forget and press the wrong button. This is a real problem that Nintendo refuses to address. For any gamer who's used the Xbox or PS4 for long enough, moving to a Nintendo is a very frustrating experience. If you're going to give us a Pro controller, let us swap the AB and XY placement to match the Xbox or PS4. This is supposed to be a Pro controller, right?

The controller includes a 60 inch (5 foot) long USB-C charging cable. You can never have enough well made USB-C charging cables. Unfortunately, it's not quite long enough to be useful as a wired controller unless you sit close to the Switch. I prefer the 10-12 foot cables that let you game using a cable. Again, this is a miss by Nintendo. Make the cable longer.

At $69, it is overpriced for a controller with its features. The price for this controller should be no more than $49. It's definitely overpriced. Though, I will say that the wireless connection from the Pro Controller to the Switch is rock stable. I've never once had the connection drop even at a reasonable distance away (10-12 feet), unlike the JoyCons which seem to have frequent disconnection problems no matter the distance. Unfortunately, this controller cannot be used like the JoyCons. If you have a game that needs to use the hand pointer control (like the Wiimote), you're stuck using the JoyCons or you'll need to pick up the Switch and use the touch screen.