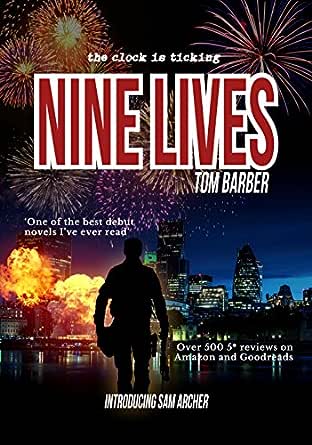 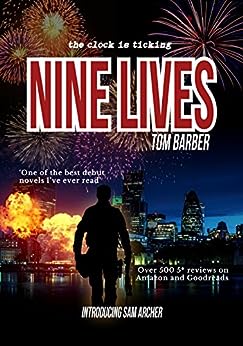 ‘One of the best thrillers in the recent past’

‘I’ve read a lot of books in the past two years since I owned a Kindle, but this was the most compulsive reading I have come across’

‘One of the best books I have read in this genre’

‘An impressive start to a great series. I've now read all 6 books, and it just gets better and better’

‘My new favourite in the genre'

It’s New Year’s Eve. A major terrorist cell is planning a series of attacks across London over the next forty-eight hours. The government has surveillance on the group, a man undercover, and prepare to move in, to take out the terrorists before they can strike. But they lose contact with their inside man. And the cell vanishes into thin air, dispersing into the streets, armed and intent on completing their assault on London. The best Counter-Terrorist teams in the country are told to take them down before it's too late.

The Armed Response Unit is one of these teams. Efficient and ruthless, the task force is ordered to locate the leader of the cell. As they hunt him down, they begin to realise that this is far bigger than any of them could ever have imagined. Bombings, rocket attacks, betrayal and a series of unexpected and shocking twists leave the ARU fighting to stay alive.

There's Archer, the youngest member of the team, keen to prove himself and justify his spot on the task force. His best friend, Chalky, who is forced to fight both the terrorists and his own demons. Porter, Deakins and Fox, tough and experienced men who’ve never dealt with anything of this magnitude. And Mac, their sergeant, who must make the quickest of decisions and lead his men against the invisible enemy.

As events unfold, other people are drawn into the danger. The Prime Minister, desperately trying to find a solution and protect the capital. A mysterious female Mossad agent, who appears out of nowhere and joins the fight against the cell. Two Special Agents from the DEA, one of whom was a member of the SEAL team that stormed Osama Bin Laden’s compound and who for some reason is struggling with the memory. And the vicious, powerful leader of a Middle Eastern drug cartel, who operates in the shadows and is somehow connected to the terrorists.

With crowds all over London celebrating the New Year, and with nine terrorists somewhere amongst them, the Armed Response Unit is faced with the most dangerous night of their lives. As the savage, shocking plans of the enemy are fully revealed, the ARU officers are faced with the ultimate question.
How many times can a man cheat Death before Death evens the score?
click to open popover

Graziella
5,0 van 5 sterren Awesome
18 april 2017
Indeling: Kindle-editieGeverifieerde aankoop
Jam packed with action. Couldn't put it down. This is happening in the world right now for real. One can only hope that they are caught in time too.
Meer lezen
Nuttig
Commentaar geven Misbruik melden
Vertaal recensie in het Nederlands

When I first got this book was when it was free but did not read it right away—had too many other books to read first. Then this past month I joined Kindle Unlimited and saw where this series falls under this category. So I decided to start reading the series since I could read them all at once. I don’t usually like to read a series unless there are a lot already published because I hate waiting for the next book to be written.

As a previous customer mentioned, it puzzled me why this first book was listed as a Sam Archer Series but don’t let that stop you from reading it—because as you read more of the series he does play a much bigger part. The first book just gives you a good feel of who he is and what he is all about.

This story takes place in England and is about an Armed Response Unit. Sam Archer is part of this unit and is the youngest member and the least experience. But even so he is able to hold his own with the rest of the team. A terrorist cell decides to create a series of attacks all over London in less than 24 hours. It is the job of the Armed Response Unit to find and stop them. The action is non-stop and the tension rises as you wonder if and how these attacks will be stopped. There are many twists and turns to this story but the biggest surprise comes toward the end. You will have to read the story to find out what the surprise is.

This is a stand alone story and very little foul language—you might find an odd word but not many and no F words at all. There are no steamy sex scenes which I really do appreciate. Now I am about to start the 4th book in the series.

Terrill D. Carpenter
4,0 van 5 sterren Tom Barber’s “Sam Archer” Series Is a Welcome Addition to My Kindle Library
3 april 2019 - Gepubliceerd op Amazon.com
Indeling: Kindle-editieGeverifieerde aankoop
While author Tom Barber’s “Sam Archer Series” has been around for a while, since January 2014, however I didn’t discover it until it was recommended by another author whom I read earlier this year. I’m certainly glad that I took the time to check it out, as it was well worth reading. While I only gave it a 4-Star rating here, my personal rating is 4.5 Stars the same as the “Amazon Average”, first time that’s ever happened.

Take the time to read the author’s blurb on Amazon, as well as Tom Barber’s author page. Maybe even take free “Look Inside” feature and read the first couple of chapters…I believe that will pique your interest enough to go on with the series which, by the way has several of the titles available via Amazon’s Kindle Unlimited Subscription service.

I found the book to be cleanly edited, and was not overwhelmed by typo’s, and grammar errors (no I’m not a “Grammar Nazi” but I do find them disconcerting at times) which made for easy reading.

I Recommend this book, and after reading it I believe you will be recommending it as well.

Thank you Mr. Barber for giving me some reading to look forward to in the future.

L.F.Falconer
4,0 van 5 sterren Compelling Entertainment
18 september 2013 - Gepubliceerd op Amazon.com
Indeling: Kindle-editieGeverifieerde aankoop
Terrorist attacks in London is one heck of a way to ring in the New Year! True to the countdown theme that pervades the pages of this book, the tension steadily builds as the clock ticks down to midnight. Despite being a trifle hackneyed in characterizations, Nine Lives is an action-filled, classic style "heroic good guys vs. cold-hearted bad guys" book that reads as if watching it on film. It is quick and vivid and seamlessly flows from scene to scene as Barber latches on and never lets his reader go.

When UK and US government agencies band together in a joint venture to stop a series of terrorist attacks upon the citizens of London, the continuous play of action and suspense is quite realistic and well presented, and I, for one, found the ending to be particularly satisfying. This book is most entertaining and I happily anticipate reading more of the Sam Archer series.

truckerguy
4,0 van 5 sterren The Good, the Bad, the Ugly...9 Lives has Got It All.
6 juni 2018 - Gepubliceerd op Amazon.com
Indeling: Kindle-editieGeverifieerde aankoop
My rating system works like this: 1 star - stinks, 2 stars - got through it, 3 stars - average, 4 stars - hey, this was pretty darn good!, 5 stars - superb, couldn't stop reading, what day is it?

So this was a 4 star; excellent storyline (plot), good character development without being a psychobabble piece, quirky observations, heroic vs villainous pairings, just a really good read. This is a debut effort and show a great deal of promise. Setting and language is British, but not unbearably so and easy reading for me, a colonial Canadian. The odd Yank makes an "in character" appearance as well. Good job, Tom!

Leapin' Literary Lurkers
4,0 van 5 sterren UK & US battle cartels and terrorism
19 juni 2013 - Gepubliceerd op Amazon.com
Indeling: Kindle-editieGeverifieerde aankoop
This could probably be subtitled a primer on terror tactics, and quite frankly had a bit more gore and violence than is my cup of chai. That doesn't prevent me from recognizing the author's ability to write a good action-packed book with well-described characters (and a couple who are too despicable for words).

There is minor allusion to political fallout and some soul-searching regarding the genesis of home-grown terrorism; motivation however was merely described, and I never felt deeply about the rationale the author presented.

The reader receives quite a tutorial on weapons, explosives and all manner of nasty scenarios. As is true in many movies of this genre, some of the close calls and coincidences defied belief.

Aside from the odd tenses which to which another alluded --- my addition would be "he had arose" where Americans would say "had arisen" or simply "he arose"---I only noted two typos: "increment weather" and "it would have been a synch" for cinch.