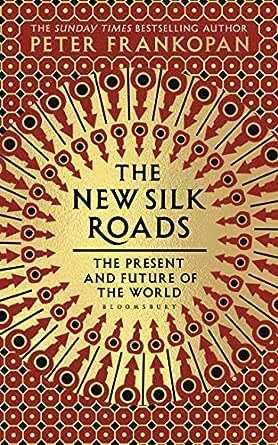 The New Silk Roads: The Present and Future of the World (English Edition) Kindle-editie

"Provocative reading for students of geopolitical and economic trends looking for a glimpse at the new world to come." --Kirkus "Masterly mapping out of a new world order. . . . Peter Frankopan has gone up in the world since his bestselling Silk Roads history was published to great acclaim in 2015--and deservedly so." --Justin Marozzi, Evening Standard "Frankopan has written another valuable and idiosyncratic book. He has the gift of perspective--the capacity to see the wood for the trees--which he combines with a Tolstoyan knack for weaving little details into the broader sweep of human affairs." --Jamie Susskind, The Daily Telegraph "Frankopan is a brilliant guide to terra incognita." --Niall Ferguson, Sunday Times "A pacy, bang-up-to-date exploration of how China's commercial and political heft is changing the way the world works." --James Kynge, Financial Times "Frankopan has written as prescient a modern history as possible . . . . [His] skill is that he able to step back a few more paces from the world map and global events than most modern commentators, whilst encouraging us to use history as a way of looking forward than regressing into the past." --Joseph Wilkins, Total Politics "A compelling, accessible account of the shift in global economic power. . . . For anyone with an interest in global politics." --Nicole Abedee, Financial Review

"If you are only going to read one non-fiction book in the coming year, let it be The New Silk Roads by Dr. Frankopan. . . . This book has all the answers and some more." --Qudsia Sajjad, News on Sunday "[D]iverting, eclectic and has serious intent. Its thesis that Eurasia is developing a sense of cohesion, largely powered by China's restless ambition, is a sound one." --Roger Boyes, The Times "Entertaining. . . . Peter Frankopan has a sharp eye for startling facts, and no reader will leave The New Silk Roads with her sense of the state of the world unchanged." --Richard Drayton, Times Literary Supplement

'Masterly mapping out of a new world order' – Evening Standard

The New Silk Roads takes a fresh look at the relationships being formed along the length and breadth of the ancient trade routes today. The world is changing dramatically and in an age of Brexit and Trump, the themes of isolation and fragmentation permeating the western world stand in sharp contrast to events along the Silk Roads, where ties are being strengthened and mutual cooperation established.

This prescient contemporary history provides a timely reminder that we live in a world that is profoundly interconnected. Following the Silk Roads eastwards from Europe through to China, by way of Russia and the Middle East, Peter Frankopan assesses the global reverberations of continual shifts in the centre of power – all too often absent from headlines in the west.

The New Silk Roads asks us to re-examine who we are and where we stand in the world, illuminating the themes on which all our lives and livelihoods depend.


The Silk Roads, a major reassessment of world history, has sold over 1 million copies worldwide.

K. Lee
1,0 van 5 sterren Not a sequel, and not a history book, either
23 februari 2019 - Gepubliceerd op Amazon.com
Geverifieerde aankoop
I enjoyed reading the author's first book, the silk road, and followed up immediately with this book. Big mistake.

This book reads like a political commentary catered to readers with strong negative feelings toward the current US administration. The emphasis would be justified if brexit, Trump, and other similar events in the past few years turned out to be historical pivotal events, but we do not know, and this is a question best left to future generations of historians.

As a fan of his first book, I wished he did not write this book. There are plenty of books on China's ambitions, there are plenty of books arguing for and against the current US adminstration, and there are no shortage of books on the US China relationship. This book adds neither new material nor insights. Other than the catchy title, I don't recall learning anything from reading this book.
Meer lezen
71 mensen vonden dit nuttig
Vertaal recensie in het Nederlands

Roger and Kara
1,0 van 5 sterren Disappointing
22 juli 2019 - Gepubliceerd op Amazon.com
Geverifieerde aankoop
I thought Frankopan's "The Silk Roads" was outstanding, educational and a real page turner for someone like me who devours well written well documented history. "The Silk Roads" is highly recommended, the "New Silk Roads" mmm.....not so much. By the time I slogged past the middle of the book I knew it was primarily not so well concealed commentary of the type anyone can see on CNN or MSNBC every day of the week. Suffering through page 178 was bad enough but when I got to page 179 and read that the U.S. had forcibly injected children of illegal immigrants/asylum seekers with drugs , leaving them unable to walk, afraid of people and wanting to sleep all the time, I'd had enough and put it down. I stopped watching CNN, NBC, CBS, MSNBC and ABC run around with their hair on fire three years ago. I didn't pass this book on as I normally do, I threw it away.
Meer lezen
16 mensen vonden dit nuttig
Vertaal recensie in het Nederlands

Priam Farll
5,0 van 5 sterren This Book Should Be Making Headlines
16 februari 2019 - Gepubliceerd op Amazon.com
Geverifieerde aankoop
This is today's and tomorrow's front page news, but it isn't talked about much because other news steals the spotlight. Read it now.
Meer lezen
12 mensen vonden dit nuttig
Vertaal recensie in het Nederlands

John M. Koenig
1,0 van 5 sterren A ball of fluff -- just a terribly disappointing compendium of statements with almost no analysis
7 oktober 2019 - Gepubliceerd op Amazon.com
Geverifieerde aankoop
When Frankopan's The New Silk Roads was selected by a book club to which I belong, I was very excited. Unfortunately, the book is a terrible disappointment. If you are looking for a repetitive compilation of statements by Chinese, Russian, and other leaders of their ambitions, along with a wide-ranging but poorly organized criticism of Trump Administration statements and policies, Frankopan's book is for you. But if you are looking for anything but the most superficial analysis of real global trends and developments, or any useful indication of what policies the U.S., the EU and other elements of the West should follow, there is nothing to see here.
As a former diplomat, professor of international relations, and harsh critic of Trump's foreign policy (as well as the Iraq War and other U.S. misadventures), I find a few items in The New Silk Roads that might influence my views. But there is no real framework for evaluating the abundance of repetitive and random facts (or, more often, reports and statements) that fill paragraph after mind-numbing paragraph in this book. It is not a difficult read; Frankopan is a good writer. But it is a terribly light read. There is no indication at all that Frankopan did serious research for this volume. And his evaluation of sources is terribly wanting -- a serious shortcoming for a professional historian.
I have not read Frankopan's earlier The Silk Roads. It must be vastly better than this, given the reviews. The New Silk Roads was certainly inspired by the earlier volume. Inspired, it seems, by the thought "I can make a lot more money without any real work."
Meer lezen
7 mensen vonden dit nuttig
Vertaal recensie in het Nederlands

Michael George
4,0 van 5 sterren modern times as a time of transition
8 juni 2019 - Gepubliceerd op Amazon.com
Geverifieerde aankoop
This book concerns the modern-day intrusion of Asia (especially China) and the Middle East into dominance of the world, and the apparent loss of influence of Europe and the U.S. Russia, China and the U.S. are portrayed as modern-day empires, involved in an extremely complex game of political, economic and social influence. Various factors have significantly played into China’s hands. The extreme importance of energy and minerals have continued to keep Russia and the Middle East of central importance. It is far from clear as to what all of this means for the future of the world. Frankopan certainly projects his viewpoint, and is convincing that there is an important transition occurring in the world at this time. He presents a complex picture, and I am not sure that it gives us much insight on the big perspective over the numerous complicated details of change. Russia, China and the U.S. play the games of empires, but the world, beyond this game, has incurred changes, especially population growth (which Frankopan alludes to only very indirectly), that muddy the picture significantly. I recommend Frankopan’s book, but not strongly, for discussing a point of view that is important. It adds one piece to the puzzle of humanity today.
Meer lezen
6 mensen vonden dit nuttig
Vertaal recensie in het Nederlands
Ga naar Amazon.com om alle 28 recensies te bekijken 3,1 van 5 sterren
Terug naar boven
Over ons
Verkoop bij ons
We helpen je graag
© 1996-2020, Amazon.com, Inc. en dochterondernemingen