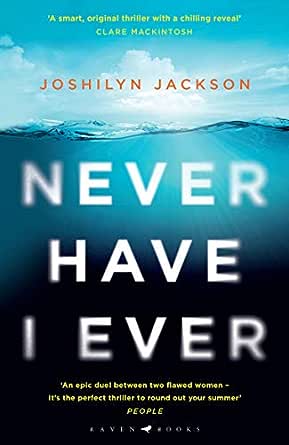 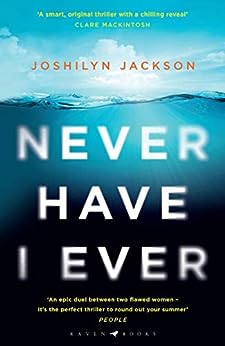 Never Have I Ever: 'One hell of a thriller' Heat (English Edition) Kindle-editie

"Joshilyn Jackson is one the best writers of the new generation. "--Mark Childress

"A vibrant, sharp and humorous read, brimming with relatable subplots, high-energy scenes and overt superhero references... The author deftly succeeds in writing a book within a book, each one beautifully complementing the other."--Atlanta Journal-Constitution on The Almost Sisters

"I was swept up by her inimitable voice from the very first page: she deftly combines such unexpected subjects as superheroes, single motherhood, race, and the impact of long-buried secrets. I love this book and can't recommended it highly enough."--Karen Abbott, New York Times bestselling author of Liar, Temptress, Solider, Spy, on The Almost Sisters

"Jackson excels at weaving a wholly absorbing story with vivid characters... [she makes] some affecting points about the importance of the stories we tell to each other and to ourselves."--Susan Rebecca White, author of A Soft Place to Land

"Wonderful--suspense and surprises, real characters, and a scary, ominous backbeat. This feels like the book Jackson was born to write."--Lee Child, New York Times Bestselling Author, on Never Have I Ever

"A smart, original thriller with real, compelling characters and a chilling reveal. I couldn't turn the pages fast enough."--Clare Mackintosh, New York Times bestselling author of I Let You Go, on Never Have I Ever

"A heart-pounding tale of cat and mouse with twists you won't see coming. Just when you think you couldn't be more shocked, Jackson delivers a mind-blowing ending. Riveting!"--Liv Constantine, internationally bestselling author of The Last Mrs. Parrish

"The more Roux and Amy became obsessed with each other, the more obsessed I became with the book. Jackson is a master... Fans of Joshilyn Jackson and newcomers alike will eat this book up. I did, and I'm hungry again."--Sara Gruen, New York Times bestselling author of Water for Elephants, on Never Have I Ever

"We're looking forward to Never Have I Ever bringing Jackson the credit she deserves. Jackson's latest is a classic interloper tale--a woman named Roux enters the lives of a seemingly perfect family and of course, her disruption reveals all the family's darkest secrets."--CrimeReads, "The Most Anticipated Crime Books of Summer"

Sunday Times Thriller of the Month

'Absolutely immaculately done, to be read in one breathless sitting'
INDIA KNIGHT

It starts as a game at a book group one night. Never Have I Ever... done something I shouldn't.

But Amy Whey has done something she shouldn't. And Roux, the glamorous newcomer to Amy's suburban neighbourhood, knows exactly what that is.

Roux promises she will go away – if Amy plays by her rules.

But Amy isn't prepared to lose everything. She's going to fight back, and in this escalating game of cat and mouse, there can be only one winner.

What readers and booksellers are saying about Never Have I Ever:

'Sizzles with suspense and delicious darkness from start to finish'

'Very well written and totally terrifying at times…be careful who you invite to book club!'

'The book of the summer'
Alle bekijken

G. Rosenthol
5,0 van 5 sterren Kept me hooked
2 augustus 2019 - Gepubliceerd op Amazon.com
Geverifieerde aankoop
Joshilyn Jackson is one of my favorite writers, and her masterful use of language and complex, flawed, relatable characters shine in this book. I'm not usually a fan of thrillers, but I could not put this down, and I may have gasped out loud more than once. I can't wait to read it again, knowing the story, to see how that changes my perceptions!
Meer lezen
35 mensen vonden dit nuttig
Vertaal recensie in het Nederlands

Kindle Customer
4,0 van 5 sterren 4.5 Stars!!
6 augustus 2019 - Gepubliceerd op Amazon.com
Geverifieerde aankoop
I LOVED this <b>4.5 Star</b> psychological thriller! It was a total cat and mouse game which kept me on the edge of my seat, reading way past my bedtime.

<b>SUMMARY</b>
Amy Way loves her life! It's a fairly simple one; she's a dive instructor in Pensacola, FL, very happily married, step mom to spirited15 year old Maddie and mom to eight month old Oliver. She lives in a middle class, family centric neighborhood and has many mom-friends. She has a very tight bond with her BFF, Char, who is one of her favorite people in the world.

Life is pretty nearly perfect except for a secret Amy has kept buried in her past. It is both her hidden shame and biggest regret. Although it happened more than 25 years ago, she still thinks about it almost every day.

One evening, a beautiful stranger, who has moved into the one and only neighborhood VRBO, shows up for Char's book club meeting. This stranger, Roux, manages to hijack the meeting, get everyone to drink too much and then, after most of the women leave, she convinces the remaining drinkers to play a version of <i>I Never</i>. Amy finds this very unsettling. Although she works hard to avoid answering any questions, she feels she has been singled out by this game. Maybe it's just guilt over her secret, but Amy feels Roux trying to corner her. Additionally, she finds out a few things about her neighbors that she really would rather not know. Pretty soon it becomes clear that Roux is not what she seems.

Told from Amy's POV, the story flips back and forth between the past, recounting Amy's secret, and the present as she and Roux face off against each other in a battle for everything Amy holds dear.

<b>WHAT I LOVED</b>
I really loved Amy! She was the kind of main character you wanted to see win in the end. As an overweight, marginalized teenager with an unrequited crush on her handsome BFF, it was so darn easy to sympathize with her. I desperately wanted her to find moments of happiness and of course I wanted the BFF, Tig, to love her back as more than a friend. Their personalities just clicked, it could have been great! Then, as the adult Amy; the one who had lost the weight, found herself and found the real love of her life, I wanted her to be able to hold on to this life. I loved how she managed to match wits with slippery Roux and hold her own. I loved how fiercely she loved not only her own baby, Oliver, but also her step daughter, husband and BFF Char. I completely admire that type of loyalty and the ability to love fully. She has definitely made a HUGE irreversible mistake or two in her life, but she knew it, she lived with it and suffered deeply from it. She really did try to set things right. It was one horrible mistake in an otherwise quite decent life.

I also loved Maddy. She was a spunky fifteen year old girl who called her step mom her "step monster" or just "monster" for short and it was truly a term of affection. I have an admiration for spirited girls both in literature and real life. They are just more fun.

The next best part of the book was the suspense. I kept thinking it was close to being done but then another twist would come along and I would realize there was more to come. I actually had to force myself to stop reading one night / morning when I realized it was 5 a.m.! I kept waiting for a good stopping point and never found one. I could not stop!! The ending was not at all what I expected!!! It took me by surprise!

<b>WHAT I DIDN'T LOVE</b>
There was one part near the very end that was pretty disturbing. I could have been just fine not having that in my head. Yuck. I don't want to say anything else about that because it leads to a big twist and it would be a huge spoiler.

<b>OVERALL</b>
Minus the part I mentioned above, this was a great story. It would make a fantastic book club selection; so many themes, moral and ethical grey areas to discuss and the characters would be so fun to dissect.
Meer lezen
28 mensen vonden dit nuttig
Vertaal recensie in het Nederlands

Gingersnap59
5,0 van 5 sterren Stellar Read
7 augustus 2019 - Gepubliceerd op Amazon.com
Geverifieerde aankoop
This is my favorite book I've read this year! The writing is flawless, the plot is unpredictable and the characters are fully rendered. I was absolutely riveted from page 1. If you love a good psychological thriller, look no further.
Meer lezen
29 mensen vonden dit nuttig
Vertaal recensie in het Nederlands

Kerry Kilburn
5,0 van 5 sterren Best of her novels - and that's saying something!
10 augustus 2019 - Gepubliceerd op Amazon.com
Geverifieerde aankoop
Wow, was this a wonderful read! I am a big Joshilyn Jackson fan, and was really excited when I learned she had written a thriller, a new genre for her. I was not disappointed. First, her prose is excellent as always, somehow combining poetry with a down-to-earth sensibility and delightful, sly humor. Her characters are, again as always, richly drawn; her two main characters, in particular, continue to reveal themselves in unexpected ways throughout the novel. But the story - OMG! The pacing is spot on, with beautifully timed reveals, twists and turns that ratchet up the tension to the breaking point - I was flipping electronic pages as fast as I could as the denouement unfolded.

Kudos to Ms. Jackson for a spectacular entry into the field, and I hope we get more of these in the future!
Meer lezen
23 mensen vonden dit nuttig
Vertaal recensie in het Nederlands

Kindle Customer
5,0 van 5 sterren WOW!
4 augustus 2019 - Gepubliceerd op Amazon.com
Geverifieerde aankoop
I recognized Joshilyn Jackson's name as the author of a book, I'd read and loved, "God's in Alabama." It was the review of her just released book, " Never Have I Ever" and bought it immediately. She went another way in her writing, a thriller this time. I'm not a thriller lover, but I have it a try, and 'WOW' I loved it. Many thrillers just bombard you with an improbable rollercoaster ride that many times was so convoluted that I would read the last chapter and quit reading! Jackson wrote a rollercoaster ride, but every page is filled with timely character development and intriguing surprises that made me not want to skip ahead! Great read!
Meer lezen
18 mensen vonden dit nuttig
Vertaal recensie in het Nederlands
Ga naar Amazon.com om alle 344 recensies te bekijken 4,3 van 5 sterren
Terug naar boven
Over ons
Verkoop bij ons
We helpen je graag
© 1996-2020, Amazon.com, Inc. en dochterondernemingen