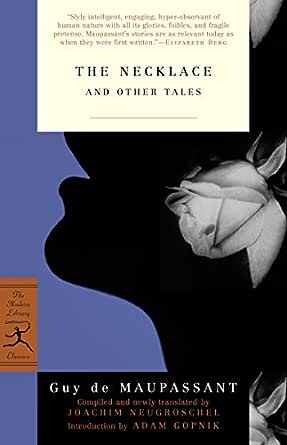 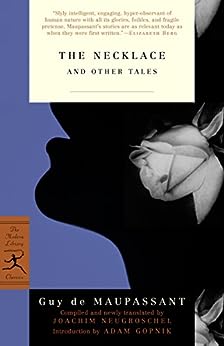 The Necklace and Other Tales (Modern Library) (English Edition) Kindle-editie

Ranging from poignant scrutiny of social pretension, to wicked tales of lust and love, to harrowing stories of terror and madness, the genius of Guy de Maupassant, France’s greatest short-story writer, is on full display in this enthralling new translation by Joachim Neugroschel. The stories Neugroschel has gathered vividly reveal Maupassant’s remarkable range, his keen eye, his technical perfection, his sexual realism, his ability to create whole worlds and sum up intricate universes of feeling in a few pages.

Adam Gopnik’s Introduction incisively explores the essence of Maupassant’s unique style and his tremendous, if unjustly unacknowledged, influence (on everything from the American short story to contemporary cinema), bearing eloquent testimony to Maupassant’s continuing and vital appeal.
click to open popover

Bleak House
4,0 van 5 sterren Some gems by Maupassant
23 juni 2016 - Gepubliceerd op Amazon.com
Geverifieerde aankoop
This is an excellent, rather short, sampling of Maupassant's genius. There are only about a dozen tales here, two of which are quite long, but they cover all of the facets of his imagination, including romance, marriage, fear, deception, prostitution, etc. I enjoyed this immensely. We're I able to, I would give this 4 and 1/2 stars. The perfect collection of Maupassant's tales, however, continues to elude me.
Meer lezen
2 mensen vonden dit nuttig
Vertaal recensie in het Nederlands

Jenny Lens
5,0 van 5 sterren Evocative, bittersweet, sensual, radical for its time and delightful for our time
18 mei 2017 - Gepubliceerd op Amazon.com
I picked up this enchanting volume translated by Joachim Neugroschel. Many of the reviews are not clear if THIS edition. Talking about various translators and Dover means reviews are NOT about the edition being sold on THIS page.

I am finding it delightful and very French. I saw Renoir's A Day in the Country and Ophuls' Le Plasir (three stories in one film). Those films sparked my interest in Maupassant. I was thrilled to find it for $1.99 at local Goodwill this week. I started with stories behind those movies.

I had to re-read the one paragraph about people dancing in the streets in The Mask. It perfectly captured my memories of going out at night, taking rock n roll photos. Or what I imagine Mardi Gras was like, before Hurricane Katrina. Very pictorial, sensual, and required me to read and read again, because I don't read so many beautifully written paragraphs like that these days!

Basically, I'm enjoying this. Not forced on me by a teacher (in fact, we never brought up his name in any class, and I also have 12 years of college under my belt). I just wanted something in contrast to the crazy politics. And I love French films, so it's a perfect match for me. To each their own, right? C'est la vie.
Meer lezen
Een iemand vond dit nuttig
Vertaal recensie in het Nederlands

Cosmoetica
3,0 van 5 sterren Good
1 oktober 2008 - Gepubliceerd op Amazon.com
I recently purchased a number of the Dover Thrift Editions of classic works by well-known writers whose work has now lapsed into public domain. One of the most noteworthy is a collection of nine tales by the acclaimed French short story master Guy de Mauppasant, whose tales are lifted from many apparent translators, none of whom are credited- which is a slight disappointment for it would have been nice to see if one or another translator was responsible for the better or worse stories, so to reckon the effect or not translation had on the original tales in French. Many critics have rightly hailed him as a skilled writer, and there is certainly much to admire in these tales. That said, there is also alot that simply is very dated, in terms of character development and plotting. Maupassant is definitely a pre-modern writer, who has far more truck with American O. Henry than the Russian Anton Chekhov, or even other Russian short story writers that predated him. Like O. Henry, Maupassant's tales are fairly predictable and his characters exist merely to tell the story, not as beings upon whom a tale intrudes. Now, both premises can work for a story, but a fully mature and modern story tends not to be merely plot-driven, and only incorporate the O. Henry approach, which often places its whole bevy of eggs in the socko payoff at end, but take the best elements from both approaches, while leaning more toward character exploration- either internally or not....There is a nice tension, in these tales, between sunny optimism and deep pessimism over the human condition, yet the tales are often a Punch And Judy show, as the manner in which such themes are dealt with is all overt. While the lack of complex didacticism hints at the future modern tendencies it sired, none of the tales, at least in this book, fully realizes a complete and human character, and it is not as if Maupassant could not be didactic. The Necklace, in fact, viciously punishes its lead characters for their needless guilt and dishonesty, signs of vanity, in a very heavy-handed way. Here is how it ends, with the protagonist encountering, after a decade of slaving to repay her debt for the diamond necklace she lost, the woman who owned the necklace:

One Sunday, as she had gone for a walk along the Champs-Elysees to freshen herself after the labors of the week, she caught sight suddenly of a woman who was taking a child out for a walk. It was Madame Forestier, still young, still beautiful, still attractive.
Madame Loisel was conscious of some emotion. Should she speak to her? Yes, certainly. And now that she had paid, she would tell her all. Why not?
She went up to her.
`Good morning, Jeanne.'
The other did not recognize her, and was surprised at being thus familiarly addressed by a poor woman.
`But...Madame...' she stammered. `I don't know...you must be making a mistake.'
`No...I am Mathilde Loisel.'
Her friend uttered a cry.
`Oh!...my poor Mathilde, how you have changed!...'
`Yes, I've had some hard times since I saw you last; and many sorrows...and all on your account.'
`On my account!...How was that?'
`You remember the diamond necklace you lent me for the ball at the Ministry?'
`Yes. Well?'
`Well, I lost it.'
`How could you? Why, you brought it back.'
`I brought you another one just like it. And for the last ten years we have been paying for it. You realize it wasn't easy for us; we had no money....Well, it's paid for at last, and I'm glad indeed.'
Madame Forestier had halted.
`You say you bought a diamond necklace to replace mine?'
`Yes. You hadn't noticed it? They were very much alike.'
And she smiled in proud and innocent happiness. Madame Forestier, deeply moved, took her two hands.
`Oh, my poor Mathilde! But mine was imitation. It was worth at the very most five hundred francs!'

Such coincidences do occur in life, and taken as an isolated tale it does not matter, but Maupassant's tales, like those of O. Henry, are best read in small bunches, as this collection has, where the stock manipulations do not get repetitive as a hammer. Read Maupassant, and check out the Dover Books website, but realize the former works best as a curio of a lost time, and not a thing of the now.
Meer lezen
6 mensen vonden dit nuttig
Vertaal recensie in het Nederlands