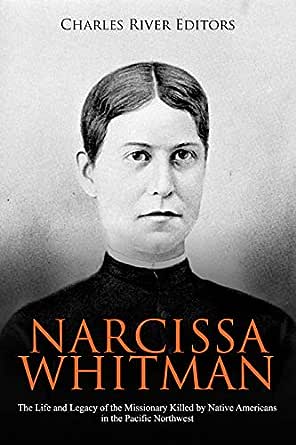 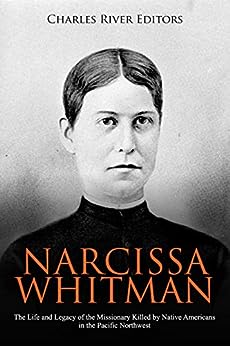 Narcissa Whitman: The Life and Legacy of the Missionary Killed by Native Americans in the Pacific Northwest (English Edition) Kindle-editie

At the start of the 1840s, the Oregon Country had no political boundaries or effective government. The only administrative organization in the territory was the Hudson’s Bay Company, which applied only to British subjects, and aside from natives, the region was populated by a handful of independent traders, hunters, and prospectors, as well as those employed in the various company depots.

The first to begin showing up in large numbers were missionaries. The native populations were by then diminished by disease and dispirited, which meant they were more receptive to missionary aid and the Christian message. Christianity, of course, was not entirely unknown among the indigenous populations, given that marriages between white men and Indian women created a hybrid of “folk” Christianity that was commonly observed among the Indians. The first wave of missionaries represented the American Methodists, arriving in or around 1834, followed a year or two later by a second series of arrivals, sponsored this time by the American Board of Commissioners for Foreign Missions (ABCFM). The ABCFM was an ecumenical organization founded to promote the general outreach of the Presbyterian and Dutch Reform churches in the United States. Roman Catholics arrived around 1830, bringing missionaries mostly from Canada and Europe.

Most wives and children remained in the East while men rolled the dice to seek fortunes in the Pacific region. However, religious movements committed to denominational migrations eventually found their way into the western plains through faintly-established routes, leading to the eventual settling of Utah. Before such western societies took root, the Pacific Northwest remained a dark void in the agendas of missionary organizations. Most were of the general mind that to convert the Nez Percé and Cayuse tribes of the Columbia River Plateau to Christianity was a hopeless venture. However, a few aspiring Protestant missionaries persisted in the belief that conversion of the unknown residents of modern-day Washington State and Oregon could be accomplished. Eventually, they received their opportunity to try, but no sponsoring organization would permit either an unmarried man or woman to attempt the journey or the project. Romanism, with its abstinent clergy, had captured much of southern California through its Mexican roots, and in a competitive framework, time was of the essence in the north. Through a fevered race against the Papacy to secure new western territory, Narcissa Prentiss Whitman became the first white women to cross the Rocky Mountains, and to settle in what is today the Walla Walla Valley of southeastern Washington State. A teacher and missionary, she accomplished the journey with her likeminded husband, Dr. Marcus Whitman. Their history-making tenure in the northwestern wilderness caused them to become one of the most well-known couples of the 19th century, and their story was soon known to the entire nation.

Narcissa Whitman: The Life and Legacy of the Missionary Killed by Native Americans in the Pacific Northwest profiles the woman at the center of one of the West’s most notorious events. Along with pictures depicting important people, places, and events, you will learn about Narcissa Whitman like never before.
click to open popover

Patroo
3,0 van 5 sterren What kind of person was Narcissa?
12 juli 2019 - Gepubliceerd op Amazon.com
Geverifieerde aankoop
The Charles River monographs are generally well done, and this one was interesting, but was seriously flawed in punctuation. This could easily be remedied by another pass through the editing process. Repeatedly the book refers to "the Whitman's." No apostrophe is needed in this, or in many other references to family groups, etc. "The Whitmans" is quite sufficient. If one were referring to "the Whitman's horse," a possessive reference, the apostrophe would be correct. There are many other places where punctuation is erroneously applied.

A factual error is made when discussing the first wagon trip made to the far West, stating that Conestogas were used. Ironically, another recent Charles River title discusses horse drawn vehicles and gets the reference correct. Conestogas were NOT used, as they were too big and heavy for difficult trails. They would ruin the livestock pulling them, even cause them to die from overwork.

Emigrants quickly learned that they could not overload their wagons, and parts of the Oregon Trail and other trails were strewn with abandoned goods. Prosperous emigrants would take several wagons plus hired drivers if there were not sufficient skilled family members to take each wagon down the trail. The wagons used were "trail wagons," comparable to today's grain or farm wagon. By using a double floor, a fair amount of supplies could be fitted into a wagon.

Marcus Whitman's first prairie voyage with a wagon was a difficult one, and ultimately the wagon was cut down to a two-wheeled cart.

This book does delve into Narcissa's personality and her apparent reluctance to interact with local tribal members beyond a bare minimum. The Spaldings, who settled at Lapwai, Idaho, made great progress in learning the Nez Perce language and produced printed works. The Whitmans did nothing of the sort for the local Cayuse Indians. Rumors sprang up about efforts to poison the natives, along with other negative stories, and history represents that the Whitmans did little to assuage these wrong impressions.

The Whitmans had a daughter who was a great favorite among the Indians, and she was fond of them. She might have been able to bridge the social gap as she grew older and was able to speak their language. This never had a chance to happen, as she drowned in the river at age 2 while getting a cup of water. Narcissa was greatly affected by the death of little Alice, refusing to give her up for four days after her death. After the toddler was laid to rest, Narcissa remained distant and even more hostile to the natives who came to the mission, according to this account.

During the mission's short history, though, people in need constantly came through the mission, and the Whitmans took in orphans and provided boarding care for youngsters like Helen Mar Meek, daughter of the famous trapper, Joe Meek. She was to be educated as she grew older. Mary Ann Bridger, another trapper's daughter, also lived at the mission. The Sager family of orphans found a home with Narcissa, as did other children. Some would die during the massacre or the ensuing captivity. None of this is covered in this monograph, though this would have suggested that Narcissa was a loving, generous woman. At least two of the children that lived at the mission were part Indian, and no information seems to survive that she was less fond of them than of Alice and the Sagers.

The study of Narcissa in this book may not represent a balanced view of the woman who came west to work beside her missionary husband.

Speaking of balance, there is a reference to the sidesaddles used by Narcissa Whitman and Eliza Spalding, suggesting that they caused discomfort and an awkward position. This is unlikely unless the saddles were of poor quality, as a sidesaddle actually allows one to sit squarely on the horse's back with better balance that some will ever find when riding astride. It's also possible that Narcissa was a poor rider, and that contributed to her discomfort on the trail. A person riding sidesaddle with proper form is actually very secure. A sidesaddle used by one of the four missionary women is in the Oregon Historical Society collections.

I found the History Link page which has a lot of this book, word for word. There are footnotes giving credit to sources.

Don't take this book as the final word on the woman who came west on horseback beside her husband, and ultimately died the same day in a horrendous massacre. Perhaps her less appealing qualities contributed to her death at the hands of a Cayuse warrior. If she had been more popular, she might have been one of the prisoners taken away from the mission. This may have made no difference, as she and Marcus represented white incursion and a change to a way of life that had been the same for generations. If fate had sent a different pair of missionaries to the Walla Walla area, would the massacre have occurred?

DD Gott - Donadees Corner
5,0 van 5 sterren Quick and easy, History at it's finest.
6 november 2019 - Gepubliceerd op Amazon.com
Geverifieerde aankoop
I love history and Charles River Editors make it so easy to keep you informed! As I have aged I find that I have forgotten many things and this is a quick way to refresh my knowledge. Thank you, guys! Quick and easy, History at it's finest.
Meer lezen
Vertaal recensie in het Nederlands
Ga naar Amazon.com om alle 2 recensies te bekijken 4,0 van 5 sterren
Terug naar boven
Over ons
Verkoop bij ons
We helpen je graag
© 1996-2020, Amazon.com, Inc. en dochterondernemingen