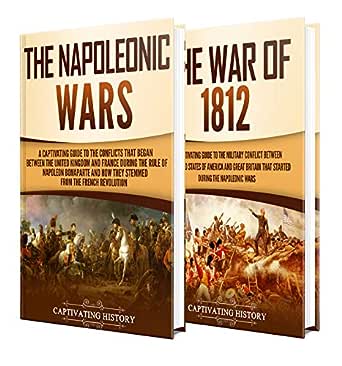 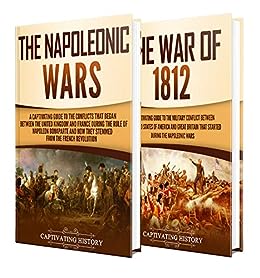 If you want to discover the captivating history of the Napoleonic Wars, then keep reading...

Two captivating manuscripts in one book:
The Napoleonic Wars, which took place between 1803 and 1815, were spearheaded by probably France’s best tactician and military strategist to date, General Napoleon Bonaparte. His tactics and strategies were so grounded that it has served as the basis for many major warfare campaigns and maneuvers, both during his lifetime as well as after his demise. Even France’s sworn enemy for most of the medieval era, the British, acknowledged his ingenuity despite his ultimate defeat at the hands of the British army at the end of life.

In this book, we will take an interesting journey through the annals of history to inspect the Napoleonic Wars: why they started in the first place, a glimpse into the life of the legendary commander Napoleon Bonaparte, the course of events and some of the major players on the board, and the stories of the last glimmer of France’s military greatness. While the French Army did play a crucial role in both World Wars, they pale in comparison to the army of France, which was led by one of the most brilliant military minds in history, during the country’s last great military campaign against its greatest rival, Britain.

In the first part of this captivating book on the Napoleonic Wars, we will examine Napoleon’s role in the war not only as a military genius but also as a politician, ruler, and social reformer, and perhaps uncover some of the more dubious aspects of the legend that is Napoleon Bonaparte.

This is a concise history of the Napoleonic Wars and the U.S. War of 1812 presented in two volumes. The accounts are focused on the turbulent period in world history that followed the 1789 French Revolution which triggered 25 years of nearly constant armed conflict between France, and most of the major nations of Continental Europe, The British Empire, and eventuality the U.S. The warfare finely culminated with the defeat of French Army, led by Napoleon Bonaparte, by a coalition of European armies led by the British Empire 's Lord Wellington, at the Battle of Waterloo (Belgium) in 1815. It is important to note that the warfare in Europe was a factor in the U.S. decision to declare war on the British Empire in 1813.
The first volume is a thoughtful, well written chronicle of the 25 year military conflicts between France and a coalition of European nations led by England. The later part of this period is known to history as the Napoleonic Wars. Events discussed in this account include: the French Revolution and Post-Revolution France; the French Revolutionary Wars; the political rise of Napoleon Bonaparte and the rise of Bonapartism; the Napoleonic Wars; and the decline and defeat Napoleon. The narrative, was well researched and contains extensive footnotes, while providing an excellent analysis and keen insights into this important period in world history.
The second volume is an account of the events associated with the United States of America's armed conflict with the British Empire in the early 19th Century. In retrospect, the decision by U.S. to declare war on the British Empire, appears an act of great hubris. At the time the U.S. possessed only a small, militia based Army, and a tiny Navy, while Britain was an acknowledged military superpower, boosting a large, battle hardened, and veteran standing Army and the most powerful Navy in the world. The skillfully organized and well written narrative chronicles the war's critical aspects, beginning with a brief overview of the factors leading to war, followed by brief biographies of the most important leaders on both sides, statistics related to the forces involved in the fighting and the manpower losses sustained during the war. The author also provides an excellent timeline of the war, which an excellent tool to enhance the reader's understanding regarding the conduct of the war. The narrative continues with detailed discussion describing the war's conduct, organized around the events that occured chronologically in each of the major theaters, including: the U.S. force's three invasions of Canada , battles fought in the western frontier; the War in the East including the British Army's invasion on the east coast and burning of Washington D.C., the Creek War, and General Jackson's conquest of Spanish forces in Florida, and the British Army at the Battle of New Orleans; the successful battles fought by the U.S. Navy throughout the course of the War; and finally closing with insightful discussion of the peace negotiations conducted in Ghent, Belgium, which resulted in ending the hostilities. The author's exceptional narrative style describes these events in an interesting and conversational written manner, that captures the remarkable saga of America's final battles with England and it's impact on both countries subsequent histories.

Renee Lewis
5,0 van 5 sterren Informative
8 januari 2020 - Gepubliceerd op Amazon.com
Geverifieerde aankoop
A lot of information in these two books. They have information that you might not have known about this time period and conflicts. Great reading.
Meer lezen
Vertaal recensie in het Nederlands

Bevan
3,0 van 5 sterren Informative content, but ....
3 januari 2020 - Gepubliceerd op Amazon.com
NAPOLEONIC WARS - see separate review for The War of 1812
While there IS lots of information, the presentation is a chore to read. This one is a disappointing contribution from Captivating History as it's screaming out for an Editor. It's peppered with odd expressions, duplications, odd grammar and punctuation; combined with some aspects in minute detail, while other significant events are glossed over; and so on and on….
The book is titled: 'The Napoleonic Wars' but the actual subject 'Beginning of the Napoleonic Wars' is not addressed until Chapter 5. It's preceded by lots of 'setting-up' filler.
Chapter 2 summarises the situation , but in a rather haphazard fashion which is awkward to follow - like the glossing over of the executions of French royalty.
There's comments like: "…. Napoleon's brilliant execution of his ingenious tactics and strategies that baffled his opponents…" but no actual explanation of the tactics.
There's also no explanation of the process whereby Napoleon actually became 'emperor'.
The first 'abdication' and exile to Elba ( and escape) just happens, and the same applies with the second exile to Saint Helena (no 'escape', of course!)!
**** for content, but lost a * due to presentation.
KEEP UP THE GREAT SERIES!

Kindle Customer
4,0 van 5 sterren Important Times.
5 januari 2020 - Gepubliceerd op Amazon.com
As always a solid overview of the Napoleonic Wars, and this bundle includes The War of 1812, both worth reading. I liked the inclusion of the pre Napoleonic Era French Revolution, and Napoleon's part in it, especially as his spring board to Emperor. This usually gets little coverage in history classes. Worth the tome, check it out.
Meer lezen
Vertaal recensie in het Nederlands