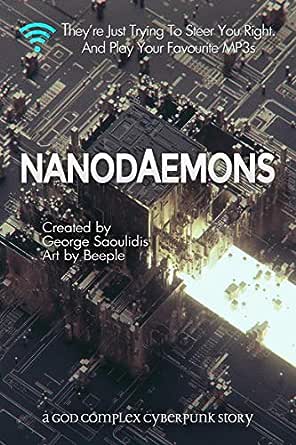 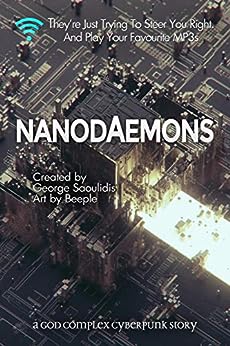 A Curious Case Of Eudaemonia

Tron meets Inside Out in this funny sci-fi thriller.

When an ordinary guy’s implanted devices are reset after a construction accident that costs him his arm, the daemons in charge of his electronics are just trying to do their job as usual. But will they manage to keep their user happy and alive, when every bit of info they uncover becomes another part of a mystery, when it becomes clear that someone is framing him for murder and when a corporation is sending a snake charmer assassin after him?

Inspired by Aristophanes Clouds (Nefeles) and a little bit of "Inside Out," this fast-paced action-thriller delivers computer jokes along with an interesting tale of redemption.

From ScifiSelect: "This humorous look into the Internet of Things is equal parts exciting and worrisome."

Do you want to know what’s next for the poor daemons? Do you wanna meet the User? Then read a curious case of eudaemonia in this unique sci-fi action thriller.

What is the god complex universe?

The gods are back in town. Skyscrapers pop out of nowhere all over Athens. Corporations rename themselves as Greek gods. It all started with the Greek crisis of 2009 and will forever change the world as we know it.
Some say that CEO’s have gone mad. Others, that they know damn well what they are doing. That there is something solid amongst the myth. In the day of inter-connectivity and social media admiration, can the myths come back to life?

What happens when a corporation gets a god complex? Find out in our series of books on Kindle. Described as light cyberpunk, definitely sci-fi and with a fresh twist on Greek mythology.

Today, you can get 3 ebooks for FREE by going to: http://www.mythographystudios.com/join-the-mythographers/

Rose Glass
5,0 van 5 sterren Creative and funny. If you can read the glossary, you can get the jokes.
31 januari 2017 - Gepubliceerd op Amazon.com
Geverifieerde aankoop
I read the reviews first and took the advice to read the glossary. I also read a wiki article on computer daemons. It didnt take much time and I like a sci fi novel that helps me understand more about technology. I may have missed a few jokes, but I don’t think so. If I didn’t get it, I looked it up. Maybe that’s a pain for some people but I google stuff all day long because I’m curious. Having said that, it was a great read, quirky and funny. I am basically a techno moron who is also a scifi geek. (How did that happen?). The book didnt bother explaining how daemons became self-aware, it was just assumed as a starting point. Their conversations reflected how little or how much each devise understood about the human they served. That alone was hilarious. The devices/programs had to work together to figure out how to interact with the external environment within their limits, solve a mystery and keep their human operational. Very mild spoiler alert--they accessed a dog to accomplish a goal. The book is goofy, creative and entertaining.
Meer lezen
Een iemand vond dit nuttig
Vertaal recensie in het Nederlands

Making Good Stories
4,0 van 5 sterren Tech Terror
13 mei 2016 - Gepubliceerd op Amazon.com
Geverifieerde aankoop
Most of us are glued to our phones. We'd be lost without them. Eventually, these things will be implanted as a part of us--I mean, just look at the work in Black Mirror. But in Nanodaemons by George Saoulidis, this has already become a reality and becoming cybernetic is commonplace.

Leo works in construction and was recently in a work accident where he pushed a stray dog to safety, which lost him his arm. With medical treatment, he was able to get a second-hand arm and get back to work within a week. But this new-to-him arm appears to be a problem when Leo appears to have murdered the kind-hearted mayor. As the nanodaemons try to figure out the mystery behind why Leo would have committed murder, they find that Leo is being framed and work to reveal the truth.

An interesting premise in a not too distant future with a moderately decent execution, as it was still a bit difficult to read. It wasn't so much that it was filled with tech talk, but I think it was the format of how that text was presented. If it were to have been augmented in a way to more easily delineate for readers traditional narrative versus the nanodaemon exchanges, it might reduce the struggle readers have with it--something as simple as offsetting it and using a different font could have eased it a bit.

George
5,0 van 5 sterren A really fun read however
16 februari 2018 - Gepubliceerd op Amazon.com
Geverifieerde aankoop
you had better like the techie nerdies stuff. A poor doofus gets caught up in sinister stuff.
i loved it.

Talia
4,0 van 5 sterren Funny, limited plot, but if you're a techy you'll enjoy it.
23 mei 2016 - Gepubliceerd op Amazon.com
Geverifieerde aankoop
If you think xkcd's "Sudo get me a sandwich" is funny, then you'll like this. Otherwise, don't even try. The humor won't sustain you long enough for anything like a plot to happen. But it you DO like xkcd, then you should snigger through this.
Meer lezen
Vertaal recensie in het Nederlands
Ga naar Amazon.com om alle 16 recensies te bekijken 4,0 van 5 sterren
Terug naar boven
Over ons
Verkoop bij ons
We helpen je graag
© 1996-2020, Amazon.com, Inc. en dochterondernemingen