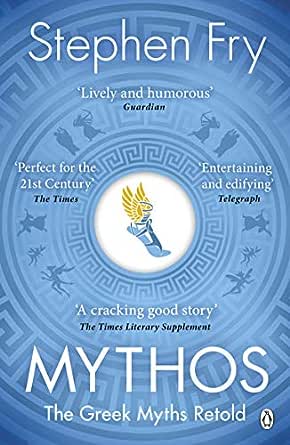 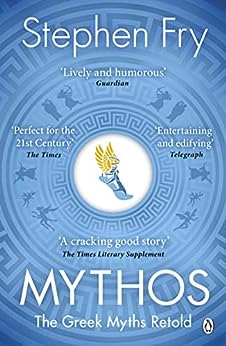 'A romp through the lives of ancient Greek gods. Fry is at his story-telling best . . . the gods will be pleased' Times

Discover Stephen Fry's magnificent retelling of the greatest myths and legends ever told . . .
___________

No one loves and quarrels, desires and deceives as boldly or brilliantly as Greek gods and goddesses.

In Stephen Fry's vivid retelling, we gaze in wonder as wise Athena is born from the cracking open of the great head of Zeus and follow doomed Persephone into the dark and lonely realm of the Underworld. We shiver in fear when Pandora opens her jar of evil torments and watch with joy as the legendary love affair between Eros and Psyche unfolds.

Mythos captures these extraordinary myths for our modern age - in all their dazzling and deeply human relevance.

If you're enthralled by the magic of Greek mythology you'll love Fry's follow-up book HEROES, with tales of mortals and monsters, quests and adventures . . .
___________

'A head-spinning marathon of legends' Guardian

'An Olympian feat. The gods seem to be smiling on Fry - his myths are definitely a hit' Evening Standard

SHORTLISTED FOR A NATIONAL BOOK AWARD

The Greek myths are the greatest stories ever told, passed down through millennia and inspiring writers and artists as varied as Shakespeare, Michelangelo, James Joyce and Walt Disney.

They are embedded deeply in the traditions, tales and cultural DNA of the West. In Stephen Fry's hands the stories of the titans and gods become a brilliantly entertaining account of ribaldry and revelry, warfare and worship, debauchery, love affairs and life lessons, slayings and suicides, triumphs and tragedies.

You'll fall in love with Zeus, marvel at the birth of Athena, wince at Cronus and Gaia's revenge on Ouranos, weep with King Midas and hunt with the beautiful and ferocious Artemis.

Thoroughly spellbinding, informative and moving, Stephen Fry's Mythos perfectly captures these stories for the modern age - in all their rich and deeply human relevance.

Amy A. Behrbaum
5,0 van 5 sterren Wonderful, just wonderful
15 november 2017 - Gepubliceerd op Amazon.com
It's been a very long time since I've enjoyed a book as much I have this one. Mythos is a beautiful retelling of the Greek myths that is absolutely endearing. Within the first few pages, I knew that this is the book I would like someone to read to me on my death bed. Astoundingly well written.
Meer lezen
88 mensen vonden dit nuttig
Vertaal recensie in het Nederlands

Michael A. Fallig
5,0 van 5 sterren is an excellent audio book -- although
31 december 2017 - Gepubliceerd op Amazon.com
Geverifieerde aankoop
Audio retelling of the myths -- with Fry's POV and insights, is an excellent audio book -- although, if you aren't remembering your mythology clearly, the first disk about the Titans, chucked full of information, is a bit dry and requires careful listening to get through. But on Disk 2, beginning with the story of the rise of Zeus, Fry's thoughts and interjections come through and add interest to the retelling of these stories and his perspective. Recommend highly!
Meer lezen
32 mensen vonden dit nuttig
Vertaal recensie in het Nederlands

Ray Strodl
5,0 van 5 sterren Greek Myths Beautifully Retold
18 maart 2018 - Gepubliceerd op Amazon.com
Geverifieerde aankoop
Mr Fry is one of the authors I follow and I was excited to find this unexpected gem from him. I was used to his memoirs and contemporary tales and Mythos was a pleasant surprise.

This is a wItty, beautifully written and intelligent reselling of these tales that I know so well from Robert Graves books, and I spent a delightful time with my May favorite characters from Greek Mythology who came to life in this wonderful book.

I am a huge fan of Stephens writing and I anticipated this would be great, and he certainly has not disappointed in any way.

If you want to revisit these stories or would like to explore the myths that certainly are intrinsic to the western world in so many ways, allow Stephen Fry to take you on this wonderful journey.

Sascot
4,0 van 5 sterren Gods brilliantly and cleverly brought to life
11 juli 2018 - Gepubliceerd op Amazon.com
Geverifieerde aankoop
What a joy to read a coherent and clearly well researched story about the very naughty Greek gods written by one of the best intellectual minds out there. No matter what your beliefs, this is a romp you cannot fail to enjoy, Stephen Fry's prose as alive with mischief as the characters. You will have a smile on your face all the way through.
Meer lezen
11 mensen vonden dit nuttig
Vertaal recensie in het Nederlands

DollyF
5,0 van 5 sterren Captivating storytelling by author.
19 juli 2018 - Gepubliceerd op Amazon.com
Geverifieerde aankoop
Since childhood, I have enjoyed reading about Greek mythology when my parents gave me my first book. The retelling of the myths by Stephen Fry is captivating. I bought this book because I find Stephen Fry on his show QI to be able to explain things in such a way to make even the most mundane or unbelievable subject enjoyable. I made a good choice to read the book, before listening to the audiobook of Mythos. You will not be disappointed.
Meer lezen
5 mensen vonden dit nuttig
Vertaal recensie in het Nederlands
Ga naar Amazon.com om alle 72 recensies te bekijken 4,5 van 5 sterren
Ontdek het beste van shopping en entertainment
Gratis en snelle bezorging van miljoenen producten, onbeperkt streamen van exclusieve series, films en meer
> Ontdek Prime
Terug naar boven
Over ons
Verkoop bij ons
Amazon-betaalmethoden
We helpen je graag
© 1996-2020, Amazon.com, Inc. en dochterondernemingen