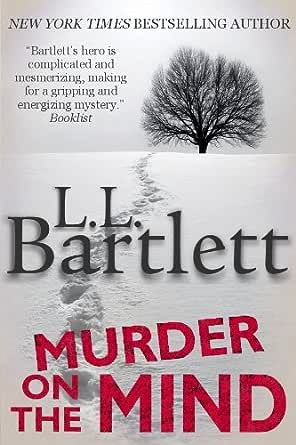 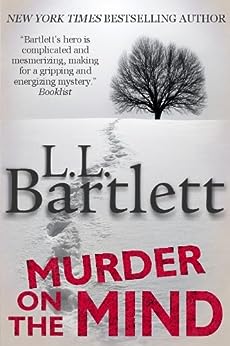 Jeff Resnick hardly knew his well-heeled half-brother. But after suffering a fractured skull in a vicious mugging, he reluctantly accepts the fact that he has a long and brutal recovery to face—and his closest of kin can provide him with the time and place to do it.

Now, Jeff is haunted by unexplained visions of a heinous crime—a banker, stalked, killed, and eviscerated like a ten-point buck. When Matt Sumner’s murder is discovered, a still-recovering Jeff realizes this was what he had seen. Jeff must not only convince himself of his new-found psychic ability, but also his skeptical brother Richard Alpert. Since Sumner was Richard’s banker, both brothers have a stake in finding out what happened. With Richard’s reluctant help, Jeff’s investigation leads him to Sumner’s belligerent family and hard-nosed business associates, none of whom want him snooping around.

When Jeff discovers a second victim, he knows he must relentlessly chase his quarry even if it means risking his brother’s life.


“This fine paranormal amateur sleuth will send readers shuffling off to Buffalo to accompany Jeff on his investigation.”
--Midwest Book Review

“Nicely written and quite twisty.”
--The Book Bitch

“Murder on the Mind was a very compelling read, the plot tight and well-paced, and the relationships among the three principals (Jeff, Richard and Brenda) fascinating and cozy. I found it difficult to put down.”
--The Cozy Library

“This book was a great ride that I didn’t want to get off. I fell in love with the characters and I love the tone of this story. This is a good read and I highly recommend it.”
Dru’s Book Musings

“Murder On The Mind catches your interest from page one.”
--BestSellersWorld.com


When Jeff Resnick begins to recover from a severe brain injury, he discovers he has the ability to sense past events --including a murder -- but nobody believes him. Resnick is a fine character, with a strong sense of right and wrong. This is a page-turner.
-- Barbara D’Amato, award-winning author of FOOLPROOF

"Put yourself in Jeff Resnick's shoes: You've suffered brain damage from a vicious mugging, and now you 'see' allegorical visions of murder in troubled nightmares and in even more troubling, conscious hallucinations. L. L. Bartlett does a wonderful job of showing us how difficult such a life can be as Jeff tries to overcome his own tragedy by using his new gift to investigate others. Beautifully written in a stark, spare style, MURDER ON THE MIND is a perfect choice for anyone open to a paranormal thread in a lovingly woven crime novel."
-- Jeremiah Healy, author of TURNABOUT and THE ONLY GOOD LAWYER:

Murder On The Mind was originally published in hardcover by Five Star/Cengage. Published in paperback by Worldwide Mystery Library.

After a brutal mugging in Manhattan leaves him with a broken arm and fractured skull, insurance investigator Jeff Resnick reluctantly agrees to recover at the home of his estranged half brother, Richard. At first, Jeff believes his graphic nightmares of a slaughtered buck are just the workings of his traumatized mind. But when a local banker is found in the same condition, Jeff believes the attack has left him with a sixth sense--an ability to witness murder before it happens. Piecing together clues he saw in his visions, Jeff attempts to solve the crime. His brother Richard is skeptical, but unsettling developments begin to forge a tentative bond. Soon, things that couldn't be explained by premonition come to light, and Jeff finds himself probing into dangerous secrets that touch his own traumatic past in wintry Buffalo--and the killer is ready to eliminate Jeff's visions permanently.
click to open popover

PandaV
4,0 van 5 sterren Entertaining.
12 december 2017 - Gepubliceerd op Amazon.com
Geverifieerde aankoop
This is a quick read, not too much of a mystery but more along the lines of being a thriller. It starts slow but does eventually pick up and get a good pace to keep the reader reading. I liked the psychic aspect and took a liking to the main character right away but hated the rich brother for most of the book. Overall it is a good book, it is the start of a series but it is also a stand alone not a cliff hangar story.
Meer lezen
13 mensen vonden dit nuttig
Vertaal recensie in het Nederlands

Valerie Joan
5,0 van 5 sterren WOW!!
20 januari 2017 - Gepubliceerd op Amazon.com
Geverifieerde aankoop
I'd previously heard of Jeff Resnick mysteries but had never read one. This #1 in the series gripped me from the first page. One of those "I've got to read it all but I don't want it to end" books!

Jeff is about to start a new job in NYC when he's mugged and left for dead. Four days in a coma as a John Doe until he's able to give his name. A traumatic braIn injury necessitates that he not be alone so he 'temporarily' moves into his brother's in Buffalo.
Aside from headaches and trying to recover he also has visions, senses things others can't. This leads him to almost witnessing a murder but who would believe this, not the police. As he's trying to recover his physical and emotional life, Jeff becomes entwined in trying to solve a gruesome murder.

N.Mitchell
5,0 van 5 sterren Most entertaining main character I've come across in awhile
19 november 2017 - Gepubliceerd op Amazon.com
Geverifieerde aankoop
Psychic murder mysteries always tend to play out the same way: psychic gets visions of crime and eventually nabs the bad guy. What Bartlett did in this story though was beautiful. After realizing that her chosen genre gave her little leeway to deviate from the norm, she decided to colour what she could - her characters.
Each character had a level of depth that you rarely find in books nowadays. I especially liked Jeff (the main character) and found myself cracking up at almost all of his unspoken thoughts (and a few of his spoken ones too lol). Almost everyone had an interesting and not-so-picture-perfect past that made the story even more believable.
Now I'm not saying that the story itself was not good as it was well written (with very few instances of flawed grammar). It's just that for me, the characters are what really made it memorable. Definitely worth the read and the next installment doesn't look bad either.

Hillel Kaminsky
3,0 van 5 sterren Good Debut
26 januari 2016 - Gepubliceerd op Amazon.com
Geverifieerde aankoop
After a lengthy period of unemployment Jeff is about to begin a new job, but is mugged and badly beaten, suffering brain damage. The beating left him with some sort of psychic power and he senses a particularly gruesome murder before it is made public. Jeff feels obligated to try to figure out who committed the murder and eventually does so.

I didn’t particularly enjoy the “psychic detective” aspect of the book as it feels like it has been done many times before and in the best of books it is patently ridiculous. The story would have been better if he just used his intellect (and his brother’s connections) to solve the crime.

I liked Jeff as a character, particularly because of his flaws. The relationship between Jeff and his brother Richard was believable and well rounded, but Richard’s girlfriend Brenda was a bit underdeveloped.

This was a good debut novel and I look forward to reading more from this author.

HaHa, Inc.
1,0 van 5 sterren Boring and irritating
2 oktober 2018 - Gepubliceerd op Amazon.com
Geverifieerde aankoop
Even if you believe in "psychic phenomena", this story will make you question every move he makes.
First, why did he have those dreams in the first place? If every person with the ability would be randomly attacked by vision of every murder, unrelated to them and uncalled for, imagine what terrible life they would have!
Second, he had dreams of a deer being killed in a field, but that's all he really had, involuntarily. After that, an occasional murder he sees reports of in the paper gets associated with that deer in his mind, and somehow he feels it his responsibility to investigate it. Nobody in their right mind launches investigation of murder they read about in the news. This all is silly. Show me a psychic who would do it, just for the heck of it. They won't.
However, if a real psychic needs to learn something, they would not go around interviewing people, they should be able to find out all they need - psychically. This one goes and bugs people with idiotic questions, and keeps doing it even then police and his brother's lawyer told hem to get off the case.
The guy is bored, not very bright, terribly immature (a spoilt teenager - at hit 38!!), and he is mad at his brother for being rich while he himself is dirt poor. Like a proverbial dog that bites the hand that feeds him. Very annoying.
Don't even want to say anything about quality of writing. Well, it sounds like a script for a movie. I doubt anybody would want to make a movie of it, though.