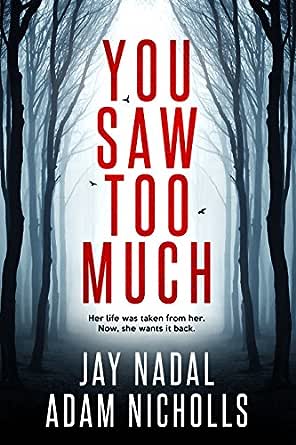 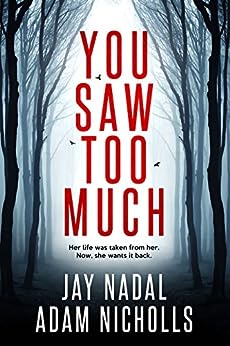 Her life was taken from her. Now, she wants it back.

Lori had it all until that day: the perfect marriage, a job she loved, and a beautiful home in a small town. But when a tragic car wreck takes her husband's life and leaves her hospitalized, she has to learn to live alone again. Her friends look out for her, or so they say, but they don't believe her when she says she's being followed.

Her counselor says she's suffering PTSD, and her sister says she's paranoid. But Lori knows herself better than anyone else does, and she's certain someone is watching her. What she doesn't know is why, but she'll do anything to find out - even if it costs her life.

Tormented by nightmares, mood swings, and self-doubt, Lori's life is on the brink of collapse. Every move she makes will leave you begging for the truth until the very last page in this brand-new psychological thriller full of lies and conspiracies.

"Revenge isn't an option. It's her only option. Enthralling stuff!"

"If you're a fan of vigilante justice stories, you'll love this gripping new novel."

"Another great thriller from two incredible authors. I couldn't put it down!"
click to open popover

Grantsbrarian
1,0 van 5 sterren Lacking Character Development
18 april 2018 - Gepubliceerd op Amazon.com
Geverifieerde aankoop
While I am usually a fan of books about car accidents and amnesia, I am so sorry I spent the time and money on this book. You Saw Too Much was repetitive and lacking in content and character development. It seems like the author(s) took every cliche from every bad suspense novel and compiled them into this one book. The attempt to show gaslighting of the main character could have been better developed but never was. The scenes were so discordant in the way they swayed from the main character's fear to supposed bravery; from naivete to sudden insight.
Meer lezen
64 mensen vonden dit nuttig
Vertaal recensie in het Nederlands

Katie Kindle Customer
5,0 van 5 sterren Intriguing--Wow!
25 maart 2018 - Gepubliceerd op Amazon.com
Geverifieerde aankoop
I rarely give a five star rating but this book merits every one of them. The story is a love story, a mystery and a thriller. All of the elements will keep the reader suspended and anxiously waiting for what is happening next. The descriptions in this book are fantastic as the words paint pictures and emotions. A book I enjoyed from beginning to the end!
Meer lezen
32 mensen vonden dit nuttig
Vertaal recensie in het Nederlands

Gabi Rosetti
5,0 van 5 sterren "I’ll get to the truth somehow ... Even if it kills me."
2 mei 2018 - Gepubliceerd op Amazon.com
Geverifieerde aankoop
Lori and Sam were on their way to have a picnic (at which Lori was going to share some exciting news with Sam) when tragedy struck. Lori knows that the car wreck that took her husband's life was not an accident. She does not know how she knows it, but she just does. She wants Police Chief Joe Reynolds to find out what really happened that day, what it is that she cannot remember...

When Lori leaves the hospital, she goes home and hides from the town. Well-meaning people call and stop by, but she does not answer the telephone or the door. When she does go out, she returns home only to find someone has been in her house. She gets strange phone calls from an anonymous number and someone is following her. "Her counselor says she's suffering PTSD, and her sister says she's paranoid." Nancy (her sister) insists on staying at a local motel to be there for her and help her...

This was an excellent nail-biting, edge-of-your-seat psychological thriller and one of the best that I have read lately! The plot was well thought out and well presented. I was drawn into Lori's journey to try to find the answers and to recover her lost memories. I admired her determination to solve the mystery of what really happened, while my heart broke over all that she lost. There were plenty of twists and turns to entertain. The suspense kept me turning the pages far into the night.

I would be interested in reading more books by Mr. Nicholls and Mr. Nadal. I would highly recommend YOU SAW TOO MUCH to anyone who enjoys a good "is-this-real-or-am-I-crazy?" thriller!
Meer lezen
22 mensen vonden dit nuttig
Vertaal recensie in het Nederlands

Cammo
1,0 van 5 sterren One of the worst books I've read
11 mei 2018 - Gepubliceerd op Amazon.com
Geverifieerde aankoop
I found this book just woffled on and on. I had to skip through the middle section and go to the end otherwise I probably wouldn't have finished it. I can't believe so many people gave it 5 stars.
Meer lezen
20 mensen vonden dit nuttig
Vertaal recensie in het Nederlands

Jo Gibbs
5,0 van 5 sterren You Saw Too Much by Adam Nicholls
12 april 2018 - Gepubliceerd op Amazon.com
Geverifieerde aankoop
This book is gripping, thrilling, chilling and we'll written. Lori and Sam have both gotten off work early to have a picnic in the small, quaint town of Castleford, Connecticut. She wanted to give him the special surprise that he was going to be a father. While they were driving, a black Dodge Ram ran them off the road, walked up to the car and killed Sam. Lori passed out and some up in the hospital. When she wakes up, she has a head injury and can't remember if what she thinks she saw was real. Then a sinister force is at work trying to make her think she is losing her mind. She starts picking up clues such as her house being broken into to let her know something very weird is going on. Her adventure to find the truth turns deadly and frightening!!! You will want to stay up all night to see the nightmare she starts living.
Meer lezen
17 mensen vonden dit nuttig
Vertaal recensie in het Nederlands
Ga naar Amazon.com om alle 205 recensies te bekijken 3,9 van 5 sterren
Terug naar boven
Over ons
Verkoop bij ons
We helpen je graag
© 1996-2020, Amazon.com, Inc. en dochterondernemingen