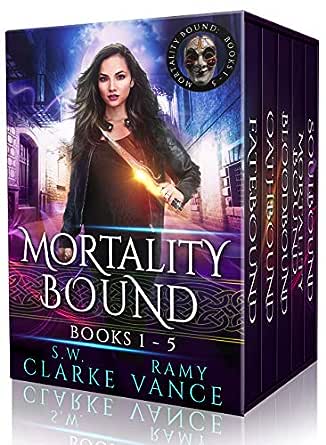 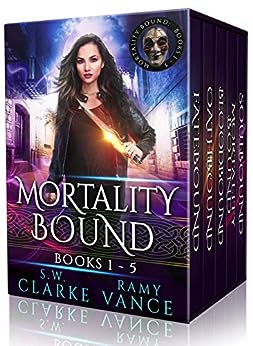 Mythical creatures are real, and the world is just finding out.

Badass, snarky heroine. The sexiest demigods this side of Valhalla... You'll find all of this and more in the complete Mortality Bound boxed set.

Over 1500+ pages of magic and mayhem, action and humor to keep you up waaay past your bedtime!

Stop me if you’ve heard this one: Cupid, Hercules and a shapeshifter walk into a bar…


Isabella is a 500-year-old teenage shapeshifter on the run with her boyfriend. She’s being hunted by the world’s elite who will stop at nothing to rip out the knowledge she holds in her head.

And to think, a week ago her biggest problem was finding the number to Dominos.

Our girl did steal the secret DNA map of mythical creatures. Wonder what she’ll do with that?

The combination of what she knows and what she stole might be the key to save her kind from total extinction.

Isabella has a choice to make: run in the hopes of finding a peaceful life for her and her love ... or stop and fight for the once-immortal mythical creatures who now roam our world.

If you like the Dresden Files, Mercy Thompson series or Buffy the Vampire Slayer, you’ll be helplessly addicted to the Mortality Bites series.

***
NOTE: The demigods are definitely sexy (and so are the humans), but this isn’t a reverse harem. This is sassy, fast-paced, action-filled urban fantasy with a hard-fantasy twist.

Strap yourself in, because this fast-paced series promises one heck of a thrill ride. Start reading today!

What Amazon readers are saying:

★★★★★ ‘I love how the author(s) have woven in mythology, fiction, and everything else into these books.’

★★★★★ ‘The characters are lovable and the story is fast paced and ever so intriguing.’

★★★★★ ‘Many of the GoneGod World's favorite recurring characters ... I can't wait to read more.’

★★★★★ ‘F*$@ you! Chapter 19 and the Epilogue broke me. Now I'm going to have to find a new coffee shop to work at because I'm too embarrassed to show my blubbering face here again.’

Four years ago, the gods left. All of them. Their last message to humanity was "Thank you for believing in us, but it is not enough. We're leaving. Good luck."

At first no one took them seriously. Until, that is, all the denizens of all the heavens and hells started showing up on people's doorsteps.

Creatures from every religion, mythology, folklore or fairytale now live among us, mortal and homeless. Trouble is, after eons of living forever, elves, dragons, dwarves, oni-demons, even friggin’ Medusa aren't very good at being mortal.


Welcome to the GoneGod World...where myths are real and the once immortal creatures of myth are all mortality bound.
click to open popover

Scott B. Allan
5,0 van 5 sterren The Ultimate Urban-Fantasy Classics Now in One Bundle!
9 november 2019 - Gepubliceerd op Amazon.com
Geverifieerde aankoop
"Badass, snarky heroine. The sexiest demigods this side of Valhalla... You'll find all of this and more in the complete Mortality Bound boxed set. Over 1500+ pages of magic and mayhem, action and humor to keep you up way past your bedtime!"

This is the ultimate badass box set from Urban Thriller-Fantasy authors Ramy Vance and S.W. Clark. I have read all the books in this series and so, when I heard they are bringing out this box set, it was a no-brainer to grab with all stories now bundles together.

I have been a fan of the GoneGod World since the series started, and now, this series by S.W. Clark and Ramy Vance and are doing some serious damage to my senses. The stories are great and whips you through the action like traveling through a fast-moving wormhole. The story characters are crafted in a way they continue to surprise you in every scene.

If you like the Dresden Files, Mercy Thompson series or Buffy the Vampire Slayer, you’ll be helplessly addicted to the Mortality Bites series.

The demigods are definitely sexy (and so are the humans), but this isn’t a reverse harem. This is a sassy, fast-paced, action-filled urban fantasy with a hard-fantasy twist.

This series is something I definitely recommend for fiction-fantasy lovers. Hell, even if you are into spy action [as i am] you'll rate this series a 10.
— Scott Allan

JennsPage
5,0 van 5 sterren A Must Read For GoneGod World Fans
9 november 2019 - Gepubliceerd op Amazon.com
Geverifieerde aankoop
If you're a fan of the GoneGod World this series is a must read. I can't say enough good things about this series. It's always dicey when an established author invites someone else to write in their world, but Ramy Vance has made a fabulous choice in S W Clarke. I instantly fell in love with her characters, and her writing style. I can't wait to see what she does next with her corner of the GoneGod World.

Main character Isabella, is very different from Kat Darling and brings a welcome does of vulnerability to the GoneGod World. Clarke infuses her characters with both heart and humor. Everyone's favorite hunky boyfriend, Justin Truly is back along with several other GoneGod World favorites like, Cupid and Hercules.

This series was so much fun, I just couldn't put it down.

Amazon Customer
5,0 van 5 sterren Awesome book series
8 december 2019 - Gepubliceerd op Amazon.com
Geverifieerde aankoop
This series of books is about what happens in a world where God and the other gods have become disappointed in everything and everyone and have left.
Angel's, demons, ghosts, pixies, elves, giants, and all manner of magical mythical creatures have been dropped on Earth to try to make a go at mortal life.
Some are good guys some are pure evil.
And in this GoneGodWorld there are divisions between some humans and some Others. But there are many Others and humans who just want peace.

Kindle Customer
3,0 van 5 sterren Wow how many species do we have?
25 december 2019 - Gepubliceerd op Amazon.com
Geverifieerde aankoop
The characters were really good but to me the story seemed to drag along. The storyline could have been a little more exciting or racy. The fights were well done, I could actually visualize them.
Meer lezen
Vertaal recensie in het Nederlands