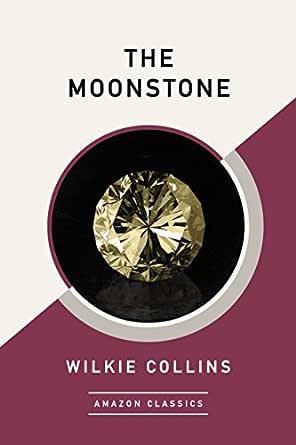 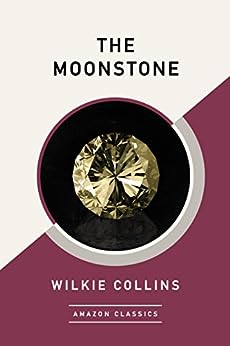 Bequeathed a rare diamond by her late uncle, heiress Rachel Verinder has no idea it was stolen from an Indian temple or that it has a cursed history. When the diamond disappears on her eighteenth birthday, multiple suspects—including Rachel’s suitor, Franklin Blake—are implicated in its theft. Determined to prove his innocence, Franklin begins his own investigation. Did one of his fellow Englishmen steal the jewel? Or was it whisked back to India? The case, which unfolds through multiple narratives, takes startling twists and turns in pursuit of the truth.

Widely considered the first great detective novel written in English, The Moonstone is one of Wilkie Collins’s most famous works.

AmazonClassics brings you timeless works from the masters of storytelling. Ideal for anyone who wants to read a great work for the first time or rediscover an old favorite, these new editions open the door to literature’s most unforgettable characters and beloved worlds.

Simone 08
5,0 van 5 sterren First detective mystery
1 maart 2019 - Gepubliceerd op Amazon.com
Geverifieerde aankoop
I first read Wilkie Collins's "The Moonstone" when I was about 10 years old. However, when I read this time that, according to P.D. James, this book was the first mystery that used a detective character involved in the case, I decided to have another read, since that fact makes the book rather historical. Of course, my take after decades was quite different. The child was enamoured with that Indian (as in India) culture woven throughout. The adult was enamoured with the overall mystery storyline.

Wilkie Collins wrote an engrossing murder, but it was written when either editors didn't exist or publishers didn't care about lengths of novels. That was the fashion in those days. It is very well written, but as a former newspaper editor, (yes Virginia, there were newspapers once upon a time) I was itching to edit it and shorten it about 300 pages.

But of course,, it was worth reading. I won't go into detail since it is a mystery , just to say that the moonstone itself ended up in its rightful place.

This was an Everyman's Library edition, which has an attractive cover and its own book mark built in.
It is quite attractive, but the print is far too small. I believe the pica is about a 5 point rather than the more readable 8-10 points. There are magnifying glasses on the market now (Amazon has them) and I keep a couple of pairs for books whose publishers insist on making more bucks by printing books with print so small that readers can't read them. The sales are everything and not the comfort of the consumer. (So what else is new??)

The character of the detective from the (new at that time) Scotland Yard is very well drawn. Since I don't have the book anymore, having passed it on to a relative, I can't tell you his name. Let me say, though, that he was very astute and tough with a streak of tenderness. By that, I mean that he was passionate about growing roses and wished to retire and grow his roses full time,, to the exclusion of all else. He has a running dialogue and argument with a gardener about which was the proper way to treat the soil for roses production, which is humorous and homey. By that, I mean that in the chaotic murdering world in which he works, he has a comfortable passion for the every day growing of roses. It is his anchor in a violent, uncertain world.

If you are a mystery buff, you can't go far wrong by reading "The Moonstone" regardless of its verbosity in parts.

My husband, who is a mystery buff who like them short and to the point, actually read Collins's book from cover to cover and was quite taken with it.

It's worth the read.

Susan J. Williams
4,0 van 5 sterren Interesting and unexpected twists to this mystery!
24 januari 2018 - Gepubliceerd op Amazon.com
Geverifieerde aankoop
There were so many aspects I thoroughly enjoyed in this book. The mystery has some great twists and turns as well as the various unique characters! The book is written from several character perspectives, which is fun for the most part. One character in particular though, was not so fun to listen too. She just went on and on and from an exhausting and close-mindedness religious mindset .....
The first character reminded me so much of "Mr. Carson" on Downton Abbey that I really enjoyed reading anything from him.
Since this was written in the latter half of the 1800's, I anticipated a tougher read given how much are language has changed since then, but I was quite relieved and delighted that it was very easy to read.
Meer lezen
18 mensen vonden dit nuttig
Vertaal recensie in het Nederlands

Art Grrrl
5,0 van 5 sterren Absolutely Wonderful!
3 oktober 2013 - Gepubliceerd op Amazon.com
Geverifieerde aankoop
I forced myself to read this Victorian book since it is "the first English detective novel." Honestly, it was such a surprise when it turned out to be one of the Best Books I've ever read. I could not stop raving about it. The story is told by the different characters, and each character has a distinct personality. Collins's ability to capture different perspectives from all of the different characters is impressive. And there is so much humor! The prime narrator is a butler who sees the novel Robinson Crusoe as the, to paraphrase from the movie "You've Got Mail", I Ching of all wisdom. Read this book. You won't be disappointed. I promise!
Meer lezen
71 mensen vonden dit nuttig
Vertaal recensie in het Nederlands

Aaron C. Brown
2,0 van 5 sterren Historical oddity
8 oktober 2018 - Gepubliceerd op Amazon.com
Geverifieerde aankoop
First, a word about the Kindle file (which does not influence my rating). Every few pages I would get an error message that would throw me back to my home screen. The only fix was to download the file again from Amazon, which got me a few pages farther along. I tried to return the product, but I was unable to do so, nor to make contact with Amazon over the issue. It's only $0.99, but it's still annoying. I ended up finishing the book from paper copies.

The stories move far too slowly for modern tastes, filled with pages of trembling emotional reactions to everyday events that quickly become tiresome. The books were originally written to be serialized in magazines and it shows. Each section begins by resetting the scenes and resolving the cliff-hanger from the previous section, then there's lots of going to and fro and characters telling each other stuff the reader already knows, before a not-very-thrilling cliff-hanger to end the section.

The plots themselves all involve young love, crimes from the previous generation, complex inheritance rules and worries about money. Although these kinds of stories were popular in mid-Victorian times, they were 100 years out of date in most respects when published. People do take trains now and then, but most of the transport is walking or horse-drawn. No one sends telegrams or sees a factory. No one has a job or interest unfamiliar to prior centuries. The social structure is thoroughly Georgian. Near-universal literacy seems to be assumed, but in other respects worldviews seem little changed since the 18th century.

Characters are broadly and humorously drawn, but do not develop. The mood is all imposed by the narrators. Descriptions are pedestrian.

I find it odd that people identify The Moonstone as the first detective novel. Collins' earlier The Woman in White is a more conventional detective story, and there are many similar earlier examples of romantic novels with puzzles at the core and characters who steadily unravels the truth.

But all of these lack important features that were supplied in Arthur Conan Doyle's Sherlock Holmes stories and later works. There is no concept of playing fair with the reader, or of clues revealed to the detective and the reader at the same time. Crimes are not solved by either logic or psychological insight. There is no concept that the facts force one solution, nor that there is a single core solution that explains everything. Lots of loose ends remain at the end. These books are romantic novels with puzzling events and crimes that are eventually explained--and that the reader usually figures out long before the characters; not by logic or insight; but by figuring out the author's style--not detective stories.
Meer lezen
6 mensen vonden dit nuttig
Vertaal recensie in het Nederlands
Ga naar Amazon.com om alle 823 recensies te bekijken 4,1 van 5 sterren
Ontdek het beste van shopping en entertainment
Gratis en snelle bezorging van miljoenen producten, onbeperkt streamen van exclusieve series, films en meer
> Ontdek Prime
Terug naar boven
Over ons
Verkoop bij ons
Amazon-betaalmethoden
We helpen je graag
© 1996-2020, Amazon.com, Inc. en dochterondernemingen