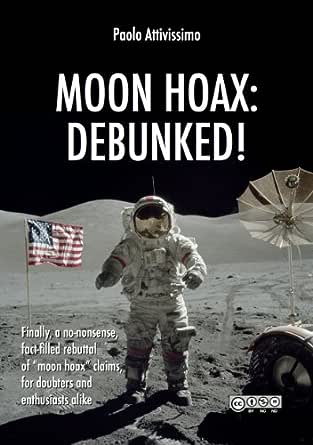 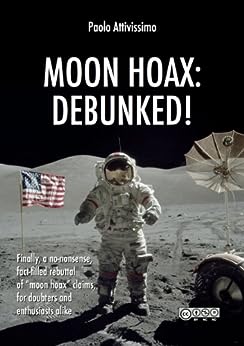 At last, a no-nonsense, fact-filled debunking of all the main “Moon hoax” conspiracy theories, collected in a single book. Open-minded doubters will find technically accurate but plain-language answers to their questions; space enthusiasts and professionals will find a handy reference for dealing with the most obstinate hoax believers and for clarifying the most frequent objections and common misconceptions about the Moon landings.

“Moon Hoax: Debunked!” is also an opportunity to rediscover and celebrate one of mankind's greatest journeys of exploration. It shows how the Apollo missions don't need conspiracy theories to be a fascinating adventure. For example, did you know how close to failure each flight actually came? Did you know that pictures of Playmates were smuggled to the Moon to prank the astronauts? Or that there was a secret Soviet plan to land a Russian on the Moon before the US?

The book includes a quick primer on the historical background of the Moon race and on the hardware of an Apollo flight to the Moon, as well as a detailed explanation of the best evidence of the Moon landings and a chapter covering the origins and popularity of the various hoax theories. There's also a guide to debating a Moon hoax believer and an exploration of the various UFO claims linked to the Moon landings.

Paolo Attivissimo is a British-Italian science journalist specialized in research into conspiracy theories, media hoaxes and urban legends and a lifelong space enthusiast. He has written or coauthored over a dozen books in Italian on information technology, Internet culture, 9/11 conspiracy theories, UFOs and science-related mysteries. He is a contributor to Le Scienze (the Italian edition of Scientific American) and to NASA's Apollo Lunar Surface Journal. He lives near Lugano, Switzerland, where he works for Swiss National Radio (RSI).
click to open popover

Susan Riley
5,0 van 5 sterren If you are on the fence about the Moon landings, give this a read.
25 juli 2019 - Gepubliceerd op Amazon.com
Geverifieerde aankoop
Was a very good read and gives excellent explanations that debunks just about every bit of "evidence" from the Moon deniers. If you are in doubt about the Moon landings and would like to know why the deniers are wrong, read this book. If you know people you have had a hard time of convincing of the truth of the Moon landings, read this book. This book does a good job of gathering the various "proofs" that the deniers are wrong all in one convenient place.
Meer lezen
2 mensen vonden dit nuttig
Vertaal recensie in het Nederlands

Common Sense
5,0 van 5 sterren If you disagree with the evidence debunking the moon hoax claims, then provide your counter evidence and argue your case please!
23 januari 2015 - Gepubliceerd op Amazon.com
A superb book.

A great collection of many of the points (and much more) that I've been making for years when discussing the Apollo moon landings with those who allow paranoia, suspicion and distrust to rule their lives, where they demonstrate that sense isn't common.

I haven't finished reading it all yet, so the real review will come later as an edit, this is more of a placeholder review.

DVD MANIAC
5,0 van 5 sterren A very good and entertaining read.
5 oktober 2013 - Gepubliceerd op Amazon.com
Regardless of your interest in the Moon Conspiracy topic (or the debunking of it), Attivissimo's book is a must-read for all enthusiasts of the Apollo missions but also for those who know very little on the subject and want to know more. The book has been crafted with great care to details and, at the end, leaves no doubts on the fact that 12 astronauts actually walked on the moon. The author deals with all the major (and minor) conspiracy arguments and explains well why they are fallacious and why it is easy, for the general public, to believe them. I was one of them, as I believed that man never actually went to the moon, mainly because I could not explain the discrepancies in certain pictures and videos (e.g. unparallel shadow projections, waving flags, etc.). Attivissimo explains everything and will certainly change your mind, if you are in doubt, as his arguments are solid and sound. The right and deserved tribute is given to all those who worked behind the scenes, the astronauts themselves and those who died in the attempt to contribute to space exploration. I commend his work of passion and I recommend it to everyone interested in this topic.
Meer lezen
15 mensen vonden dit nuttig
Vertaal recensie in het Nederlands
Ga naar Amazon.com om alle 6 recensies te bekijken 4,2 van 5 sterren
Terug naar boven
Over ons
Verkoop bij ons
We helpen je graag
© 1996-2020, Amazon.com, Inc. en dochterondernemingen