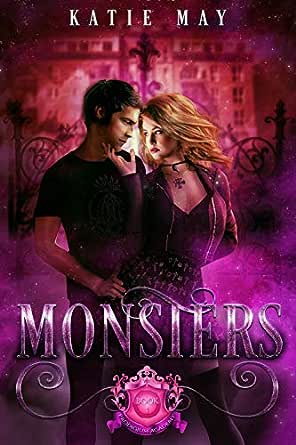 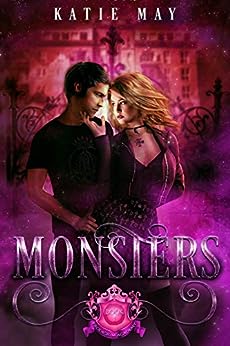 As the daughter of Dracula, you would think I’d be born the perfect monster.

You couldn’t be more wrong.

As far as monsters go, I’m a screw up—if I’m not tripping over my own feet, I’m accidentally murdering someone (it’s a real issue, guys).

Left with no choice, Dad decides to send me to Prodigium—otherwise known as Monster Academy—to train me on how to be a better monster.

When bodies turn up on campus, I’m the prime suspect (not that I can blame them. I’ll be pretty suspicious too if bodies drained of blood show up right after Dracula’s daughter arrives).

With the help of my mortal-nemesis Vin, Van Helsing’s son

I might have a chance of uncovering the truth.

If I’m not murdered first.

The struggles of being a vampire, am I right?

This is a horror comedy reverse harem with some dark elements. After all, you can’t have a bunch of monsters without some darkness. This is book one of a series.

Claudia Coenen
5,0 van 5 sterren Fun
25 november 2019
Indeling: Kindle-editieGeverifieerde aankoop
I love this book, and cant wait to see what book 2 brings! Loved the fun way it's been written but the mysterie was really a mindf*ck and what's the deal with him... if you read this book you'll know which him I mean.

Really so many unanswered questions in a good way, but the main thread had been answered so there's that...

C
3,0 van 5 sterren Missing pages
25 december 2019
Indeling: Kindle-editieGeverifieerde aankoop
There are pages missing in the ebook
Which is highly annoying. While the story is really nice.

Book-loving tea guzzler
5,0 van 5 sterren My new favorite vampire book.
2 november 2019 - Gepubliceerd op Amazon.com
Indeling: Kindle-editieGeverifieerde aankoop
Where do I even start? I like vampire books as much as the next person, but what really got me for this one was the blurb. Dracula‘s daughter. Frankenstein‘s son? Medusa‘s son? And… Drumroll please… A descendent of Dr. Jekyll and Mr. Hyde!

Plus the van Helsing twins who take a liking to Dracula‘s offspring? Omg! Then there is her banshee roommate, an incubus Cupid, and the mother-freaking Boogeyman!

Just the concept for this book alone was freaking amazing. And anything that can weave my love for classic English lit plus monsters into sexy contemporary academy stories? Biggest bonus ever!

So that’s what got me reading it. Now, what will keep me reading everything this author puts out is her overall writing style. It’s snarky, hilarious, and downright creative AF. Each sentence is epically crafted and keeps you reading to the next. Every page sends you on a whirlwind of emotions. And every chapter leaves you hungry for more.

The plot is well-developed and sucks you in from the beginning. You immediately relate to the main character because she is just so screwed up. As are all the boys in her harem.

Now I’m just pissed I don’t know when the next book is coming out. I might just re-read this one to keep me occupied in the meantime. At least I have all her other books to keep me amused as well.

I read another one of her books she did as a cowrite with one of my favorite authors, and now she is right up there on my list of favorites. If the rest of her stuff is anywhere near as unique and immersive as this one, I’m sold!

I don’t think I could recommend this book highly enough. I’m not kidding. The entire time I was reading I kept taking screenshots of hilarious scenes and sending them to everyone I knew.

Grab it now. You won’t be disappointed!

Helle
5,0 van 5 sterren Uncontrollable giggles
4 november 2019 - Gepubliceerd op Amazon.com
Indeling: Kindle-editieGeverifieerde aankoop
OHMYGODS!!!! This book was friggin hilarious! It had me giggeling the whole way through. I just couldn't put it down. An absolute masterpiece!

I love how quirky Violet is. I totally need her as my bff. All the characters are well developed and the story flows smoothly. I'm dying to read book two!!!

Hurry up and one-click this amazing book. Just remember to not drink while reading. Uncontrollable giggles are a danger combined with fluid intake

myriam
5,0 van 5 sterren One of the bestest books ever!
5 november 2019 - Gepubliceerd op Amazon.com
Indeling: Kindle-editieGeverifieerde aankoop
Wow, just wow! If I could I would give it six stars. This brilliantly written book full of outrageously humoruous statements, inner monologues, dialogues and occurrences was one of the best books I have ever read. Seriously.
I felt like this book was written for me and I found myself wondering throughout the book how did I not read this author before. Well, I will definitely devour everything she has ever written, starting now.
First of all, as I mentioned, the book is brilliantly written. The author's imagination is limitless as is her incredible humour. Then there is the unparalleled originality, which left me baffled million times. And the author has the ability to draw the reader into the story and keep them a happy prisoner. I inhaled the book and got really irritated if anyone dared to interrupt my love affair with this story.
And the world, although quite limited to one place, seems immense and full of possibilities that readers can only imagine and wait to see what wonders the author will bring next because there is too much to anticipate to even guess.
The characters are fantastic, three-dimensional, and incredibly well developed. Their reactions are somewhat human and plausible, but then not so much because they are not really human, and the author reflects that through their behaviour, reactions and personalities. Amazing. And the author added her own original twist on supernatural beings and their characteristics.
The plot is suspenseful, fast paced, there is so much action, unpredictable twists, serious moments and funny funny funny beyond words. The interactions between and among characters are fabulous. This was truly one of the bestest books ever and I am forever grateful to the author for writing it for my dear friend recommending it.

chubeck17
5,0 van 5 sterren She did it again
4 november 2019 - Gepubliceerd op Amazon.com
Indeling: Kindle-editieGeverifieerde aankoop
Dracula's daughter is a little bit unconventional, read clumsy and soft. So daddy dearest sends her to monster school. It's time violet learns how to be the badass monster she is. Whoops forgot to mention the other monsters hate vampires. Poor Vi is enemy #1. Enter four...I mean five....or is it six 😉 hot monsters that befriend her. Things look like they might be turning around for Vi, until the killings start. Everyone blames the vampires, thank god violet has these men or does she?

Katie knocked this book out of the park. I loved this story, I got sucked into violets world. The difference in personalities of the main guys and even the secondary characters is amazing. I can't wait for book number two.
Meer lezen
3 mensen vonden dit nuttig
Vertaal recensie in het Nederlands

Roxcell J
3,0 van 5 sterren Why do most book endings suck
10 november 2019 - Gepubliceerd op Amazon.com
Indeling: Kindle-editieGeverifieerde aankoop
The first half of this book was freaking hilarious and outrageous and I thoroughly enjoyed it. Then it started to be too much of the same and I got a bit bored. And by the end I was so over it I skipped pages. I still think if you have the money to spend that it can be worth reading when you want something light and fluffy but it's not a must buy.
Meer lezen
4 mensen vonden dit nuttig
Vertaal recensie in het Nederlands
Ga naar Amazon.com om alle 239 recensies te bekijken 4,7 van 5 sterren
Terug naar boven
Over ons
Verkoop bij ons
We helpen je graag
© 1996-2020, Amazon.com, Inc. en dochterondernemingen