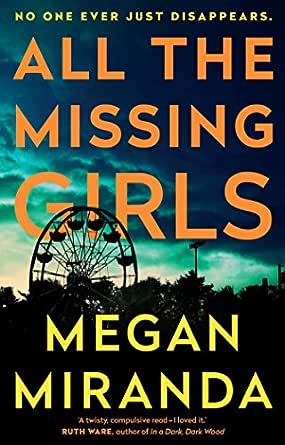 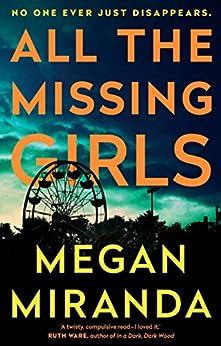 It's been ten years since Nicolette Farrell left her rural hometown after her best friend, Corinne, disappeared without trace. Then a letter from her father arrives - 'I need to talk to you. That girl. I saw that girl.' Has her father's dementia worsened, or has he really seen Corinne? Returning home, Nicolette must finally face what happened on that terrible night all those years ago.

Then, another young woman goes missing, almost to the day of the anniversary of when Corinne vanished. And like ten years ago, the whole town is a suspect.

Told backwards - Day 15 to Day 1 - Nicolette works to unravel the truth, revealing shocking secrets about her friends, her family, and what really happened to Corinne.

Like nothing you've ever read before, All the Missing Girls is a brilliantly plotted debut thriller that will leave you breathless.

Twenty-eight-year-old Nicolette Farrell returns to Cooley Ridge, North Carolina, ten years after her best friend Corinne disappeared without a trace. Nic plans to tie up loose ends and care for her ailing father, but she is soon plunged into a new drama that reawakens Corinne s case and breaks open old wounds that have not healed. The decade-old investigation focused on Nic, her brother Daniel, boyfriend Tyler, and Corinne s boyfriend Jackson. Since, only Nic has left Cooley Ridge. Daniel and his wife, Laura, are expecting a baby; Jackson works at the town bar; and Tyler is dating Annaleise Carter, Nic s younger neighbor. Then, within days of Nic s return, Annaleise goes missing. Hailed Hitchcockian by The New York Times Book Review, All the Missing Girls is told backwards from the time Annaleise goes missing prompting Nic to unravel the truth about what really happened to Corinne that night ten years ago. With plenty of twists and turns that lead down dark alleys and dead ends, Megan Miranda turns it all upside down and inside out and leaves you wondering just how far you might go to protect those you love."

ItsAMeKristigi
3,0 van 5 sterren Not what I expected.
9 februari 2018 - Gepubliceerd op Amazon.com
Geverifieerde aankoop
This book follows the life of Nicolette, who returns to her hometown to help her brother prepare their family home for sale while her father is ill and suffering from dementia. The book is told backwards, from day 15 (after her return) to day 1, which forces you to piece together the puzzle that is the reason behind Nic avoiding her home for the last decade. When her neighbor, who is conveniently enough her ex-boyfriends new fling, goes missing, all fingers are pointed at her and its up to Nic to figure out what happened all those years ago to her best friend and now to her neighbor. Were they kidnapped? Were they killed? Are the two missing girls cases related? She comes to realize that the secrets kept by the town are far more sinister than she had ever imagined. • • • Whilst I enjoyed the book, it didn’t have a huge wow factor for me aside from when everything came to unravel and the truth came out. Although this isn’t going to the top of the chart for me, it was still a good read and one that I may consider reading again but this time working from the back of the book (day 1) to the beginning of it (day 15). I did enjoy the fact that the way this book was written was very original because it kept me entertained for the most part and had me guessing what exactly went on.
Meer lezen

suvata
5,0 van 5 sterren 5-star Thriller
25 augustus 2016 - Gepubliceerd op Amazon.com
Geverifieerde aankoop
Forget The Girl on the Train. Forget Gone Girl. Forget The Woman in Cabin 10. Forget all the psychological thrillers you've read to date including We Were Liars. This book rivals them all. It made me think of a movie called Momento in that it was written in reverse order. After reading it I actually considered reading again in reverse order just to see how everything fit into place. Brilliant and intense. Beg, borrow or steal this book immediately. Just kidding. Don't steal it. The author deserves every penny she gets for this one.
Meer lezen
288 mensen vonden dit nuttig
Vertaal recensie in het Nederlands

SelmaSue
2,0 van 5 sterren Disappointing
1 december 2017 - Gepubliceerd op Amazon.com
Geverifieerde aankoop
This book is NOT in the same league as "Gone Girl". First of all, the story is told backwards which is super confusing. Second, "all" the missing girls are really one missing girl for most of the story, then a second girl goes missing 10 years later. The story line is weak, the characters are weak, there's a lot of musing about old relationships, lots of begging an old man not to talk, it sort of goes in circles and never really gets anywhere. Overall, a disappointment and I cannot recommend it.
Meer lezen
43 mensen vonden dit nuttig
Vertaal recensie in het Nederlands

Victoria Estep
4,0 van 5 sterren Good Read
12 mei 2017 - Gepubliceerd op Amazon.com
Geverifieerde aankoop
The book is written backwards so be prepared for that. This was chosen by my book club and I found it a good read. But it helped that I had read reviews on it before starting and knew that the book was going to go backwards. My book club felt that it needed to be read in one sitting because if you put it down you got confused if it was days later when you came back.
Meer lezen
25 mensen vonden dit nuttig
Vertaal recensie in het Nederlands

Bridgett
3,0 van 5 sterren Yes, it's a story told backward, but more importantly, it's boring...
6 mei 2018 - Gepubliceerd op Amazon.com
Geverifieerde aankoop
"But here’s the thing I’ve learned about leaving - you can’t really go back. I don’t know what to do with Cooley Ridge anymore and Cooley Ridge doesn’t know what to do with me, either. The distance only increases with the years."

Having spent my first 18 years in an incredibly small mountain town, Megan Miranda's descriptions of the families, the friends, the gossip, the rumors, the closeness and loyalty...it's all spot on. I only wish the rest of the book had been so insightful.

I truly wanted to like this story...but the best I can say is, for me, it wasn't hate.

The first 75% of All the Missing Girls is clunky and disjointed, with next to no character development. Clearly, the author was trying to create red herrings, but because of the way the book was written, every page just felt unfinished. I'd read a chapter and instead of feeling enchanted by the backward story line, I just felt empty and incomplete. Sadly, this was yet another book in which the author chose to write characters with no redeemable qualities...none in this novel were particularly likable. That's always hard for me as a reader. I need someone to cheer for.

The final 25% is revelation after revelation. It's literally non-stop. Unfortunately, the "twists" were a bit underwhelming, and more than a little predictable.

I started reading this book on April 28th...just finished it on May 5th. That NEVER happens. I usually average at least 3 books a week. I was just so bored, I had to force myself to pick up my Kindle and read the next chapter. There was nothing mesmerizing here, folks.