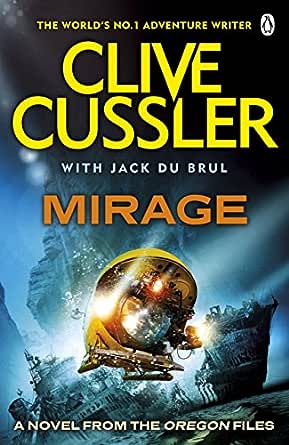 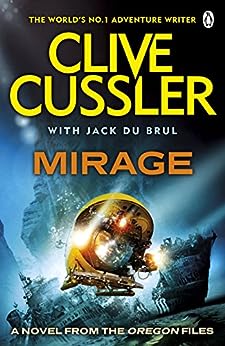 Mirage is the new heart-in-the-mouth adventure thriller in the Oregon Files from Clive Cussler.
October 1943. A US Navy warship vanishes at sea off the coast of Philadelphia. Its disappearance was rumoured to have been a result of a classified military experiment into the effects of electromagnetic radiation. The story has long since been considered a hoax.
But Juan Cabrillo and his colleagues aboard the top-secret spy ship Oregon aren't convinced.
Now, a powerful new weapon is for sale - one linked to genius inventor Nikola Telsa, who was working with the Navy when he died in 1943. Was he responsible for the original Philadelphia experiment? Are his notes in the hands of his enemies?
As Cabrillo and his crew race to unearth the truth they discover that stakes are dangerously high. And it may already be too late . . .
Offering an irresistible combination of breakneck pace and audacious plotting that Clive Cussler has made his own, Mirage is state-of-the-art action-adventure. The ninth title in the Oregon Files series, it is preceded by The Jungle and The Silent Sea.
Praise for Clive Cussler:
'Cussler is hard to beat' Daily Mail
'The Adventure King' Sunday Express
'Clive Cussler is the guy I read' Tom Clancy

TH Leatherman
5,0 van 5 sterren Not an Illusion
23 oktober 2016 - Gepubliceerd op Amazon.com
Geverifieerde aankoop
What? TH Leatherman reviewing Clive Cussler? I enjoy good sci-fi, but I also enjoy a good adventure novel. Who better to review than one of the masters of this genre.
Juan Cabrillo and the corporation have been called to service again. This time we have a Tesla twist on the story. The Oregon and her crew are back to solve the problem. A tramp freighter that perpetually looks like it's about to fall apart. A crew of specialists hiding just out of view ready to handle whatever the mission needs. The Oregon files is known for tactics, gadgets, and trickery and this book delivers. We start with a Russian prison break and just keep going. Page after page of action, action, action.
If you're looking for an action/spy thriller, I highly suggest you pick up Mirage.
Meer lezen
4 mensen vonden dit nuttig
Vertaal recensie in het Nederlands

Regrae
3,0 van 5 sterren Better than most of Cussler's other works, but......
19 februari 2014 - Gepubliceerd op Amazon.com
Geverifieerde aankoop
I grew up reading Alistar McLean and then went to the Dirk Pitt series. However after about 10 of them they sort of crashed and burned and I quit them. Then Cussler start the Oregon FIles and then I came back and back again with each novel. I truly believe that Du Brul is the reason they are so good along with the point that they come out slowly and not every other month like the rest of Cussler's series.

The story is great. Let's be real here, these stories are escapist fiction and believability is not that important, nor should stand in the way of a rousing yarn. So Tesla and his inventions once again are used to frame this story. We have the Chairman seeking revenge for the death of a friend and ending up with a syfi problem with flying ships and Russian rouge navy admiral. The action is good and fast paced.

Okay now for the three stars: I believe that books should be consistant in story line. Any time an author "zags" in the middle of a story and goes off to another story and back, that there should be a purpose for it, if not, then 3 stars for story line.

For some reason, toward the end of the novel, Cussler takes off on a wild pirate chase concering missing money from the Iraq war. Just out of the blue we fight pirates and then back to the Russian. All for no reason. Don't get me wrong this little "zag" is well written and entertaining but ......what the heck?
Meer lezen
4 mensen vonden dit nuttig
Vertaal recensie in het Nederlands

As eminently readable as all the other Oregon Files novels. However, a few technical nitpicks are in order:

--while the JASDF's (Japanese Air Self-Defense Forces) first-line fighter plane is virtually a carbon copy of the F-16, it's actually called the Mitsubishi F-2.

--"Firing for effect" means to saturate the target once you've found the range, not mere warning shots.

Nitpicks aside, another worthwhile reads from Messrs. Cussler and Du Brul.

P.S. The sidebar adventure at the Port of Umm Qasr, Iraq--which coincidentally was the location of my last Middle Eastern contract assignment--was irrelevant to the main plotline, but nonetheless made me wax nostalgic and reminded me how much I actually miss working there!
Meer lezen
Een iemand vond dit nuttig
Vertaal recensie in het Nederlands

Jeffrey T. Munson
5,0 van 5 sterren Another Great Story From The Oregon Files
10 december 2013 - Gepubliceerd op Amazon.com
Geverifieerde aankoop
Clive Cussler and Jack Du Brul have written another great Oregon Files story, and in this one, the fate of the world hangs in the balance.

Juan Cabrillo and his crew mates of the ship Oregon are tasked with rescuing Yuri Borodin from a remote Russian prison. Originally an adversary of Cabrillo's, the two have become friends over the years. Borodin was put in prison by a corrupt Russian admiral. Now, Cabrillo and his crew must find a way into the prison.

Fatally wounded during the rescue, Borodin utters the words "Aral Sea", "eerie boat", and "Tesla" to Cabrillo. What do these clues mean? Soon, Cabrillo and his crew are off trying to unravel the mystery. Delving deeper, "Tesla" refers to Nikola Tesla. Famous for his numerous inventions and far-out theories, Tesla was a true pioneer in the electronics age. Apparently, Tesla was working on some sort of cloaking device which could possibly conceal an entire ship. Add this fact in to the corrupt Russian admiral who was none too happy with Borodin's escape, and Cabrillo's group is in for their greatest adventure yet. Spanning the globe from Siberia to Uzbekistan, and from the Atlantic to a military confrontation between Japan and China, Cabrillo and the crew of the Oregon must act quickly before World War III erupts.

I'm a big fan of all of Cussler's series, including the Fargos, Isaac Bell, Kurt Austin, Dirk Pitt, and the Oregon Files. I especially enjoyed reading "Mirage". As always, the story is loaded with great action and adventure, and the characters are well-developed. This story does not disappoint. It was fun reading and trying to figure out what Cabrillo's next move would be. If you're a fan of action/adventure, then be sure to read "Mirage"; you won't be disappointed. Highly recommended.
Meer lezen
Een iemand vond dit nuttig
Vertaal recensie in het Nederlands
Ga naar Amazon.com om alle 1.344 recensies te bekijken 4,5 van 5 sterren
Terug naar boven
Over ons
Verkoop bij ons
We helpen je graag
© 1996-2020, Amazon.com, Inc. en dochterondernemingen