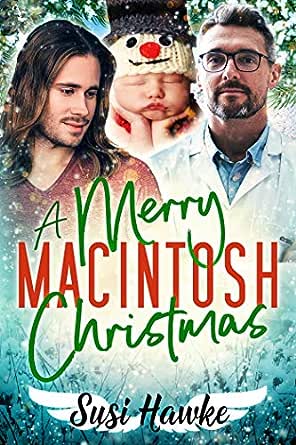 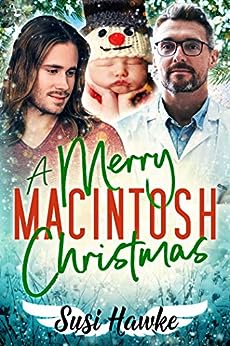 What do you do when the person you can’t get out of your head is the son of the man who jilted you thirty years ago? Proceed with caution!

When Dr. Joseph Nielson—aka Doc—walked into his exam room, the last thing he expected to find was the spitting image of the fiance who had hurt him so badly that he’d spent the rest of his adult life as a bitter bachelor.

Marion Harris is a twenty-nine year old virgin… who happens to be nine months pregnant, thanks to having agreed to be a surrogate for his best friend. After an unlucky year of sorrow, he’s now alone with a child to raise and nowhere else to go but his father’s hometown of MacIntosh Meadows.

After a not-so-great first impression, the two men keep finding themselves pushed together during the holiday season they both hate by a mischievous family who loves them—the MacIntosh clan. Despite every reason they shouldn’t, neither one can find a good enough reason to fight the matchmaking… or the natural attraction they both feel.

This is the fourth book in this heartwarming series and contains a virgin giving birth in a barn, three wise guys in pajamas, and enough holiday feels to keep you smiling into the new year. Pretty much everything you’d expect from a Susi Hawke book.

Kindle Customer
2,0 van 5 sterren Disappointing
17 december 2019 - Gepubliceerd op Amazon.com
Geverifieerde aankoop
When I read the previous books I always wondered about the doc's story, finding this on my recommendations was exciting, reading it, not as much. The characters are lovable and the idea itself is good, quite romantic and while cliche it's still cute and Christmassy. But the pase is odd, the dialogues are longer than natural, feel force and even the jokes fall flat many times. At the beginning I thought I wouldn't love it but maybe I would read it again for the loveliness. Not anymore thou, I'm getting ready of it and starting to doubt the author. All her work lacks in the same areas and this one in particular feels more like a Christmas rush to get money than a Christmas gift to the readers... Disappointing indeed
Meer lezen
2 mensen vonden dit nuttig
Vertaal recensie in het Nederlands

Kate B
5,0 van 5 sterren Great surprise story, as I thought the MacIntosh Meadows series had finished
24 december 2019 - Gepubliceerd op Amazon.com
Geverifieerde aankoop
I really enjoyed this book. It was a great surprise from Susi Hawke as I thought the MacIntosh Meadows series was finished after the Alpha’s Manny. It was great that we finally got to hear what happened to Joseph “Doc” and the reason behind him never settling down & that he finally got his happy ending with Marion who happened to be the child of Joseph’s childhood best friend and ex-fiancé Duke who left him the day before their wedding when he ran away with another man. This was definitely a Christmas story that tops other Christmas stories that I’ve read due to it even having a modern day nativity scene when Marion (who is also a virgin like Mary, he was being a surrogate for his deceased best friend and her husband) ended up going into labor in Dean and Laurie’s barn in the middle of a snow storm so Joseph had to deliver baby Skylar on a bed of hay and a sleeping bag. I’m glad that it was noted early on that even though Joseph found Marion attractive as soon as he met him he made a point to say that he looked like his ex but he was completely different and that Joseph and Duke were getting married they’d only shared a few steamy kisses because they were really only getting married to save Duke from having his mean doomsday prepper uncle forcing him into an arranged marriage even though Joseph had true feelings for him so it didn’t seem weird (people can totally do what they want but I know I’d feel weirded out if I went out with someone who’d had a sexual relationship with my parent but maybe that’s just me lol) I like that Joseph and Marion’s relationship was very slow moving and nothing really happened apart from a few kisses until near the end of the book, Joseph was also Marion’s OBGYN so nothing happened until Skylar was born which makes sense. I only that noticed one name was wrong and the only reason I did was that it was at a pivotal moment in the book as I usually either don’t notice or ignore spelling or punctuation errors while reading unless there’s that many in the story that I can’t even focus but this story was okay. I loved getting to read more from the MacIntosh clan especially the matriarchs of the family Grandma Dottie and Libby and the omega’s Kade, Laurie and Dusty, I loved how competitive this family is betting on everything to see who wins the money. I’d definitely recommend this book, series and author to anyone.
Meer lezen
Vertaal recensie in het Nederlands

Wendy Dawn
5,0 van 5 sterren Another great trip to the Meadows!
3 december 2019 - Gepubliceerd op Amazon.com
Geverifieerde aankoop
Another amazing read by Ms. Hawke!
Great characters and appearances from previous books in the series.
It’s like coming home for the holidays and catching up with family.
This will make even a Scrooge like Christmas again!
Sweet Plot lines and low angst, just a feel good read.
Can’t wait to see who else we meet from MacIntosh Meadows next time!

carrie
5,0 van 5 sterren Just what was needed for Christmas
1 december 2019 - Gepubliceerd op Amazon.com
Geverifieerde aankoop
I'm so glad this was made Susi couldn't of made a better version of the nativity seen ,Being able to revisit the Macintosh boys and Doc getting a happy ending ,throw in baby goats and a baby and you got the most wonderful book can't wait to re-read
Meer lezen
Vertaal recensie in het Nederlands