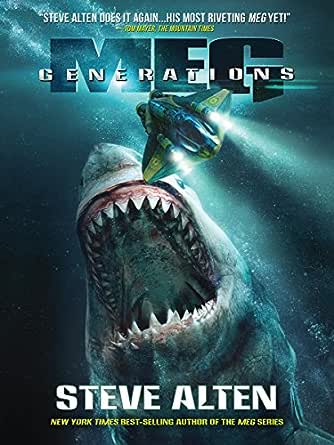 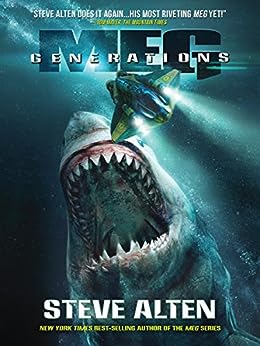 GENERATIONS opens where NIGHTSTALKERS left off. The Liopleurodon offspring has been moved to a holding tank aboard the Dubai-Land transport ship, Tonga for its journey to the Middle East. While the Crown Prince’s investors gawk at the creature, below deck in the tanker’s hold, another captured beast is awakened from its drug-induced state and goes on a rampage. The vessel sinks, the Lio escapes… and three distinct plots emerge to be woven together by master storyteller Steve Alten…
•The hunt to recapture the Lio.
•The hunt to capture and pen any surviving Megalodon pups birthed by Lizzy and Bela in the Salish Sea.
•A Stage-IV death sentence of cancer that will force Jonas Taylor to return to the most frightening location on Earth – the Panthalassa Sea.

DUBAI: An impossibility is being taken to the Middle East. The transport vessel Tonga is carrying a liopleurodon to the City of Gold. But while investors gawk at the prehistoric creature, any even more dangerous creature is beginning to stir.

The megalodon shark that Jonas Taylor worked so hard to capture is coming out of it's drug-induced stupor and refuses to be contained. No both ancient creatures, older than mankind itself, are loose in the waters of the Arabian Sea, and the region will never be the same.

BLUDVLZ
4,0 van 5 sterren A worthy continuation
2 juli 2018 - Gepubliceerd op Amazon.com
Geverifieerde aankoop
I dig Steve Alten books, and with the exception of Vostok, every one of his novels have left me wanting more. Megan Generations is no exception--literally. In a first for Alten's Meg series, this ends in a cliffhanger, teasing the next book, Meg: Purgatory.

Excited that another Meg book is coming, and given Alten's battle with Parkinson's, who knows how many more we'll get in the series.

I do suggest playing the Meg drinking game as you read the book ... anytime Alten writes 'Ampulae of Lorenzini' or 'Caudal Fin' you gotta take a shot.

Two negatives to get through up front, before the good stuff. This book should be rightfully advertised as the FIRST OF TWO NOVELS! This is literally half of a book, with no ending. It's clearly meant to be part one of a two-part novel. Amazon needs to advertise this fact in bold print, because there's currently no release date scheduled for part two. Just a line at the 'end' that, "Jonas Taylor will return in the 7th MEG novel: MEG: Purgatory". Calling the next one by a different name doesn't make it a separate book, since it's literally just picking up where the last chapter of this book stops.

Second thing is that Alten seems to be on Apple's payroll, or you would think so based on the fact that literally EVERY time a phone is mentioned in the novel, it's an iPhone. Several times per paragraph. iPhone this, iPhone that. To an absurd degree. Once we've established that a character is using an iPhone, it's ok to just use the word phone after that. Look at the other reviews that mention this. It's to the point of taking the reader out of the story.

The latest novel in the Meg series is another action-packed thriller. Steve Allen has mastered this genre and these books are faced paced, fun reads. I won’t give a synopsis, as there are plenty available. I’ll just write that if you like thrillers, monsters, action, or adventure, you’ll enjoy this book. These are characters we know from the series and who generally behave in ways we're accustomed to. If we suspend our disbelief (as we should when reading these novels), the characters take us on their amazing adventures and the rest of the world melts away. This is pure fantasy fun.

Just remembered another problem.
Big issue with the Audible version: my caveat is that if you buy the Audible version to go with your Kindle version, well...just don’t do that. This is easily the worst Audible book I’ve ever heard, by far. Fair warning, please save yourself the aggravation. It sounds like a bot reading the story. Don't know who ok'd it but this should not be allowed.
Meer lezen
13 mensen vonden dit nuttig
Vertaal recensie in het Nederlands

Carol
2,0 van 5 sterren Probably my least favourite "Meg" book
3 augustus 2018 - Gepubliceerd op Amazon.com
Geverifieerde aankoop
I found this book while browsing Amazon for something new to read. Having read all the other Meg books, I was excited to read this one. Unfortunately. by the time I'd got a third of the way in. I wasn't feeling quite so excited, for various reasons. I should point out, to be fair to the author, I only skimmed through the previous book, as I had it downloaded to my laptop, rather than my Kindle, so it wasn't easy to read. My first issue with Generations, was the huge number of characters. Made it extremely difficult to follow, and was just confusing. I did at first think it was because I'd missed a book, but reading other reviews, I can see it wasn't. The second issue was the ridiculous number of times the author mentioned the iPhone. Every single character had one, and it seemed like everything they did, or thought, or said, involved doing something with said iPhone. Maybe the author was sponsored by the company? Who knows? I hated the time gap, it felt like it was an easy way for the author to fill in a bit of time. All in all, this book was a disappointment, and not worth the cost. I don't regret purchasing it as I love the Meg series, but I do feel it was a waste of nearly $11. I will, however, read the next Meg book.
Meer lezen
8 mensen vonden dit nuttig
Vertaal recensie in het Nederlands

Greg Noneman
5,0 van 5 sterren Steve Alten Strikes Gold Again!
16 augustus 2018 - Gepubliceerd op Amazon.com
Geverifieerde aankoop
Never have I finished a book of almost 400 pages so quickly in my life, that's the charm of a great Steve Alten book, they are well-written and formatted in a way that you can flip from page to page within a decent time frame. I went through 150 pages on the 1st day I started reading and I could not put the book down. Alten really outdoes himself on the stakes and scope of this story with it's three interlocking plots with David Taylor trying to catch any surviving pups of Bella and Lizzy in the Salish Sea of British Columbia, Fiesel Bin Rashidi and Jackie Buchwald trying to capture the surviving Liopleurodon following it's escape from the Tonga, and then Jonas Taylor having to deal with his wife Terry's deteriorating health along with dealing with the myriad prehistoric creatures residing in the Panthalassa Sea, and in this book there's quite a new addition to the series that's teased in the prologue that I won't spoil here, but holy crap does it make quite the impact in the end, hopefully we'll see more of it in the next chapter Purgatory. This is just about as perfect as a marine thriller can be for me, with the Taylor family really having grown on me after following their adventures for the past twenty years, and I really felt a connection to both Jonas and David especially given the trying trials and tribulations father and son have to endure throughout the book. No characters felt like they were cliched or unnecessary to the plot as everyone has some role of importance to play in the overarching narrative, the Taylors especially felt like real people to me in this story, and that's not something I see a lot of in similar stories. The overlay of science-fiction with real facts about the animals and environments once again helps the reader to be immersed in the world of the Meg series and gives it a real sense of familiarity. Overall Steve really knocks it out of the trench with the well-written characters, terrifying scenes of predators chomping on humans, the myriad different prehistoric species on display both in captivity and in the wild, the Megs starting to become actual characters in the story and not just roving eating machines like in previous books is something I especially enjoyed seeing in this, and lastly the final chapters down in the Panthalassa made me feel like I was on a hostile planet teeming with monsters out to get me. My only gripes with the book was not getting any cool scenes with the Livyatan whale Brutus from the last book, and the inexplicable fast recovery for Terry which was probably the least realistic thing about this book. In closing this book serves to remind me of why I fell in love with this series in the first place all those decades ago. This book receives a final rating of 5 out of 5 stars for excellence.
Meer lezen
5 mensen vonden dit nuttig
Vertaal recensie in het Nederlands
Ga naar Amazon.com om alle 131 recensies te bekijken 4,4 van 5 sterren
Terug naar boven
Over ons
Verkoop bij ons
We helpen je graag
© 1996-2020, Amazon.com, Inc. en dochterondernemingen