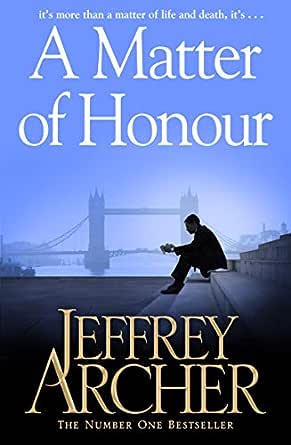 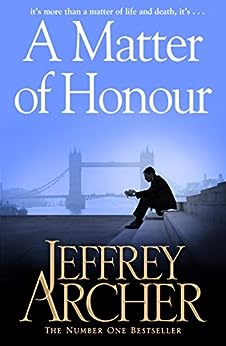 The opening of a letter leads to a desperate chase across Europe in A Matter of Honour by Jeffrey Archer, one of the world's bestselling novelists.

Adam Scott listens to the reading of his father's will, aware that the contents can only be meagre. The Colonel, after all, had nothing to leave – except a letter he had never opened himself, a letter that can only bring further disgrace to the family name.

Against his mother's advice, Adam opens the letter, and immediately realizes his life can never be the same again. The contents leave him with no choice but to follow a course his father would have described as a matter of honour.

John Jenkins
4,0 van 5 sterren Archer makes an implausible plot plausible
3 augustus 2015 - Gepubliceerd op Amazon.com
Geverifieerde aankoop
Jeffrey Archer weaves a wonderfully fast-paced story into the historical context of the Cold War. The story takes place in 1966 and has several references to events that happened in the previous 99 years. Some of the events seem far-fetched, but Mr. Archer develops the plot in such a way to make them work. Perhaps the most implausible element of the plot is that Reichsmarschall Hermann Goering would have gone out of his way to show any consideration to a representative of the enemy who had defeated Germany and was about to execute him. But it is not hard to get past the implausible and enjoy the story.

In addition to the fast-paced plot with multiple creative plot twists, Mr. Archer has a very satisfying writing style. Unlike many other novelists, Mr. Archer is capable of creating dialogue and conveying emotions without relying on four-letter words. He works in appropriate similes such as “waiting like an orphan who has been told there will be second helpings.” And he helps explain context to his readers by seamlessly inserting social commentary such as “Swiss taxi drivers know the way to the banks in the same way as London cabbies can always find a theater and New York’s cabs a West Side bar” and “a lapsed Catholic, he found he no longer believed in God—except when he was ill, frightened, or in an airplane.”

One could argue that the protagonist, Adam Scott, is a bit too virtuous, and the adversary, Alex Romanov, is a bit too villainous. This is probably true, but these characterizations enable the author to develop suspense as Romanov uses his skills to attempt to capture Scott and the unique work of art that he possesses and Scott uses his skills to try to evade capture.

Shoshana Hathaway
5,0 van 5 sterren Spies, toys and great villains
12 augustus 2012 - Gepubliceerd op Amazon.com
Geverifieerde aankoop
There is a certain formula to a type of political spy thriller, and it goes like this. Nice, naive (usually rich and handsome) guy gets himself entangled in a major international conspiracy. Everyone, including his own Government, tries to kill him, but with luck, pluck, and some help from unlikely allies (one of whom *must* be a gorgeous woman), he survives, beats all obstacles, and saves the world.

In this book, while we can see the skeleton of the formula ...those bones are magnificently covered, and what could be just another spy thriller of the type made famous (or infamous, depending on your preferences) by Robert Ludlum becomes a vibrant, unique and entirely readable spy thriller that combines action on all levels, with characters you can believe, in a setting that some readers will remember.

to begin with, the main character, though nice and good looking, isn't rich. He also has a skill set that makes his actions and daring-do very believable. Sure, he learns some things as he goes, but he has the basic combat and survival skills he will need, and, right from the beginning, we know how he obtained them. In addition, though, he is a very decent and honorable person, and while he gets himself entangled in a whee of a mess, he gets out of it with as much brain power as hand to hand combat skills.

The setting is the cold war era ...and, like John Le Carre, the author has a fine understanding of that particularly paranoid part of modern history, and presents it accurately and with just enough detail to make it entirely credible. All of the major factions are represented beautifully, and it is easy to just slip back in time to those days when nobody trusted anybody, and usually for very good reasons.

As always, the writing is crisp and straightforward. The author has a story to tell, and the command of language to tell it with grace and finesse.

It so happens that I love such books, so I tend to be critical of them. John Le Carre is my personal bench mark ...and Jeffrey Archer definitely reaches it, in this novel. In fact, while reading it, I felt as though I was enjoying the best of John Le Carre and Ian Fleming, all in one delightful package.
Meer lezen
4 mensen vonden dit nuttig
Vertaal recensie in het Nederlands

Bob Hoskins
4,0 van 5 sterren Another page turner from Archer...
20 maart 2012 - Gepubliceerd op Amazon.com
Geverifieerde aankoop
Archer is a classic novelist. I'm sure some will balk at that but, for me, it's true. I've read about 6 of his works now and, each time, I'm sucked in before the end of chapter one. I thoroughly enjoy his sagas spanning the life of a particular subject or subjects and, after reading "Not a penny more, not a penny less" I was introduced to Archer's style when it came to a plot spanning a shorter period in time.

I picked up A matter of Honor and found myself drawn in early in the book. Archer's writing style is very easy to follow and he never leaves you wondering where you are in the story. You always know who "he" or "she" is and where they are in space and time. I particularly enjoy the snippets of information Archer uses to color in the text. This novel involves a painting termed an "icon" that the Russians have had hanging in the Winter Palace. Unfortunately, that one is a fake and the real one was left to Capt. Adam Scott by his father who was a security guard to Air Marshal Guerring. The real one also holds a secret that the Russians and Americans are VERY keen to become owners of.

Capt. Scott is drawn into a cat and mouse game across Europe as he tries to get back to England with his possession.