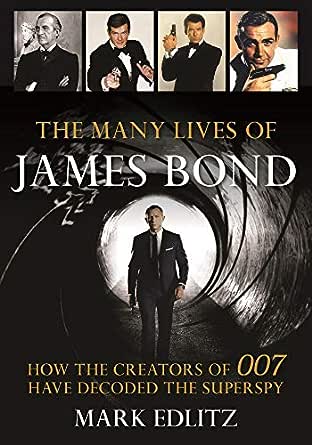 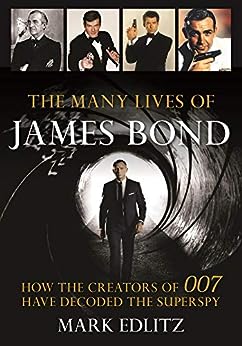 The Many Lives of James Bond: How the Creators of 007 Have Decoded the Superspy (English Edition) Kindle-editie

Lots of people love James Bond. But how many have actually been Bond? The Many Lives of James Bond offers the largest ever collection of original interviews with actors who have played Bond in different media, as well as in-depth interviews with many of the diverse artists who have contributed their talents to the making of James Bond movies, television shows, novels, radio dramas, comic books, and video games. These wide-ranging interviews provide a behind-the-scenes look at the artists’ goals, the challenges they faced, and how they met them This book is also the first to examine the Bond character through eyes of the artists who interpret him. As the author talked with these creative people, a through line emerged. It involves a series of related fundamental questions about Bond that artists must reckon with when interpreting Bond. Who is James Bond and what, if anything, beyond successfully completing a mission does he really want? What drives him? Why did he become an agent? What is the nature of his inner-life? Would he be capable of a satisfying life away from high-octane adventure and danger? These questions challenge and inspire the creators to pull back the curtain on a deliberately opaque figure in an attempt to explore and analyze Bond’s interior life and thought processes, and how the Bond actors have interpreted the role.
click to open popover

The Many Lives of James Bond by Mark Edlitz offers up a number of Bondian gems to entice and surprise even the most avid of Bond fans. Whether you’re a hardcore or casual Bond fan, you will learn something about the franchise that you may not have known before. As someone who considers himself quite well-versed in Bond franchise history, I was truly impressed with the book’s invitation to dig deeper into the franchise via conversations with actors and creators who have shaped and molded the James Bond franchise and iconography. Central to this book is Edlitz’s idea that each person charged with bringing Bond to life (whether that person is an actor, voice actor, director, writer, songwriter, stunt performer, etc) must first define who Bond is in order to deliver their contribution to each respective presentation of Bond. As Bond fans we have cherished the franchise and its many iterations for decades. We all have a clear definition of who James Bond is in our collective consciousness, but various actors and creators also have had to define who Bond is to them in order to present us with the iconic character over the decades.

Different individuals have worked on Bond ultimately molding and shaping the character based on how they perceive him. Most people tend to identify the main characterizations of Bond with the Bond actors who have portrayed him in the cinematic series produced by Eon. Edlitz reminds us that while the actors in the film series are of course very important, so are the screenwriters, directors, stunt performers, costume designers, and even the songwriters because each of those roles contributes a great deal to the franchise’s presentation of Bond throughout the cinematic series. In addition to this, there are performers and creators who have been charged with presenting Bond through radio dramas, audiobooks, continuation novels, poster illustrations, comic strips, graphic novels, a children’s cartoon, video games, and even voice actors who dub the Bond films for foreign language markets.

Edlitz’s conversations with various Bond creators and contributors get to the heart of how each of them define Bond. He talks with directors Martin Campbell and John Glen about how they each chose to portray Bond in their films. Campbell discusses his approach to directing Pierce Brosnan in GoldenEye in comparison with his turn directing Daniel Craig in Casino Royale. John Glen discusses the driving factors behind the portrayal of Bond in his films having directed both Roger Moore and Timothy Dalton. Edlitz was also fortunate enough to talk with Sir Roger prior to his death in 2017 as well as with Tom Mankiewicz prior to his death in 2010.

In addition to revelations about the cinematic franchise, Edlitz also uncovers a number of different things about Bond presentations even the most passionate Bond fans might not be entirely familiar with. Most impressive of these comes about in his conversation with Ros Holness, the daughter of Bob Holness who performed as James Bond in a 1958 radio dramatization of Moonraker for the South African Broadcasting Corporation. The performance was live and unrecorded so very little is known about it, but Ros Holness uncovered a few previously unknown details about her father’s turn as James Bond that are newly revealed in Edlitz’s book

At the heart of this book is the discovery of what each actor and artist charged with presenting Bond deemed important to bring to the role. In addition to the conversations I’ve mentioned, Editz also talks to a notable array of Bond alumni including: George Lazenby, Bruce Feirstein, Roger Spotiswood, Dick Clement and Ian La Frenais (screenwriters for Never Say Never Again), Leslie Bricusse, Anthony Horowitz, Kai Martin (Daniel Craig’s stunt double), illustrator Robert McGinnis, Glen A. Schofield (who directed Sean Connery during his voiceover work for the From Russia with Love video game), and many more. No matter how familiar you may be with the Bond franchise and its history, there is plenty in this book to dive into. I highly recommend The Many Lives of James Bond by Mark Editz as a welcome and worthy addition to my ever expanding bookcase of notable James Bond books.

Jeanette
5,0 van 5 sterren Great read!!
1 januari 2020 - Gepubliceerd op Amazon.com
Geverifieerde aankoop
This was an entertaining book and included great interviews with Bond actors and creators. Interesting perspectives of the persons who shaped the Bond we see on camera. Perfect for a Bond fan or even for a less informed enthusiast!!
Meer lezen
Vertaal recensie in het Nederlands

Gary P. Cohen
5,0 van 5 sterren A Very Enjoyable Read For the Real Bond Fan.
29 december 2019 - Gepubliceerd op Amazon.com
I wasn't expecting much from this book since they were apparently unable to us copyrighted photographs so just sketches of the Bond actors could be used. However it turned out to be an enjoyable and enlightening book.
The book is basically a series of interviews with people associated with the Bond films and books. We get interviews with two Bonds, Moore and Lazenby, a Bond female, Lana Wood, directors John Glen and Roger Spottiswoode, screenwriters Tom Mankiewicz and Bruce Fierstein, etc. There are interviews with Bond songwriters, poster artists, stuntmen, etc. There are interviews with Bond comic book artists including Mike Grell and the writer of the newest Bond novels, Anthony Horowitz. I don't care much for video games but there is a fascinating interview with the producer of the From Russia, With Love video game who got Sean Connery to return as the voice of Bond. We get some interesting information about the real Connery, still the greatest Bond. My only even vague criticism is that I wonder if anyone bothers proofreading these books any more. How can anyone who writes a book on Bond constantly misspell Maud Adams' name as Maude Adams? Other than that, I found this to be a quick and entertaining read and for the real Bond fan, I recommend it.
Meer lezen
Vertaal recensie in het Nederlands
Ga naar Amazon.com om alle 13 recensies te bekijken 4,8 van 5 sterren
Terug naar boven
Over ons
Verkoop bij ons
We helpen je graag
© 1996-2020, Amazon.com, Inc. en dochterondernemingen